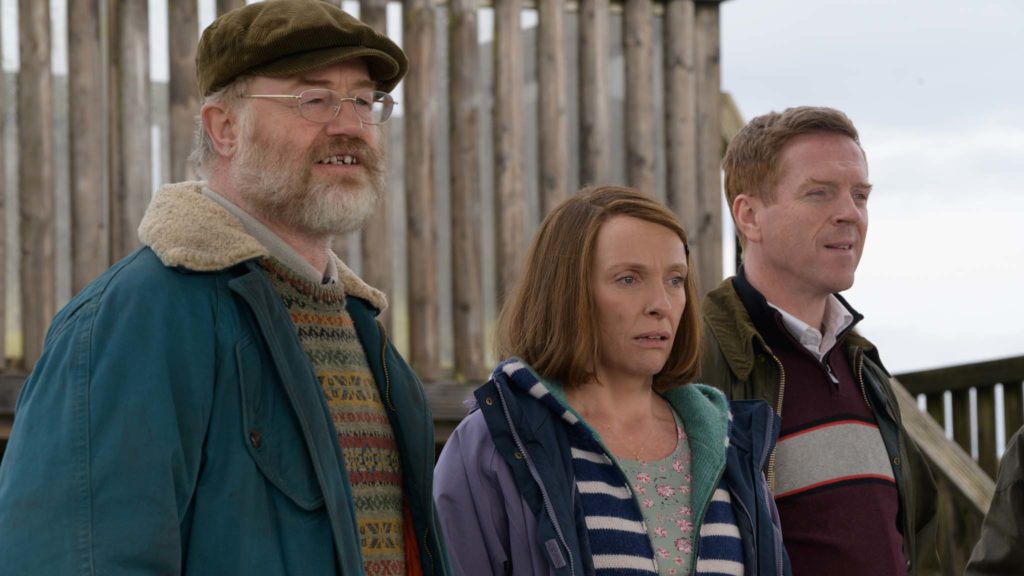 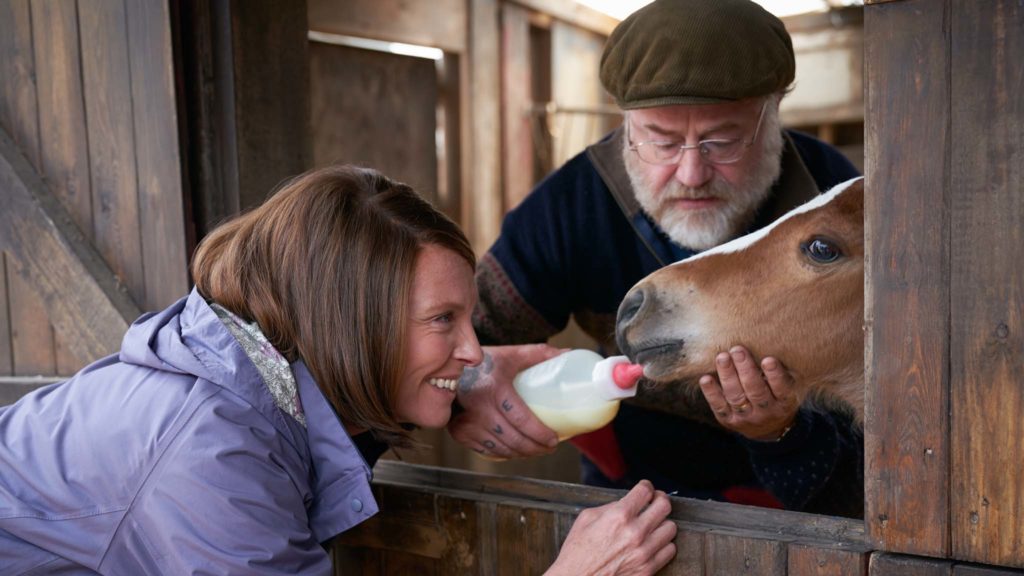 Review: Reverentially described as the sport of kings, horse racing has long been the preserve of royalty and the wealthy. A thoroughbred stallion of impeccable breeding with a glittering career on the racecourse can sell for more than £50 million and command six-figure stud fees. In 2009, a 23-strong syndicate from the former mining village of Cefn Fforest in Gwent made headlines when their horse – a chestnut gelding named Dream Alliance – romped to victory at the Welsh Grand National. The nags to riches fairy tale inspired Louise Osmond’s award-winning 2015 documentary Dark Horse and six years later, a glossy dramatisation directed by Euros Lyn trots out a crowd-pleasing underdog story across the class divide in a similar vein to Brassed Off and The Full Monty.

“A horse raised on an allotment has got a cat in hell’s chance of ever racing,” chuckles one colourful character in Dream Horse. Sporting history proves them wrong and scriptwriter Neil McKay draws heavily on interviews with the real-life owners to flesh out his menagerie of syndicate members led by Muriel’s Wedding star Toni Collette. She grapples valiantly with a melodic Welsh accent, and occasionally grazes closer to her native New South Wales, but beautifully conveys the passion of a wife who lives vicariously through her horse and rebuilds steely determination and self-belief with each small victory.

Collette plays Jan Vokes, who works as a supermarket checkout operator and a barmaid at the local working men’s club in between caring for her parents (Alan David, Lynda Baron) and wearily stoking the embers of her marriage to husband Brian (Owen Teale). Competitive passions of her youth – breeding whippets for show, racing pigeons – are a distant memory and the fire in Jan’s soul has almost been extinguished until she overhears accountant Howard Davies (Damian Lewis) regaling drinking buddies with stories of a horse racing syndicate that almost bankrupted him.

Boozy banter sows the seeds of an outlandish idea. “I’m going to breed a horse,” Jan tells her incredulous husband. “And I’m going to play fly-half for Wales!” jokingly responds Brian. True to her word, Jan invests her savings in a gentle mare named Rewbell and persuades friends and neighbours to invest £10 a week to breed Rewbell and stable a chestnut foal with trainer Philip Hobbs (Nicholas Farrell).

Dream Horse is a feelgood story of dauntless community spirit against the odds, including a career-threatening injury to the horse that requires experimental stem cell therapy. Collette, Lewis, Teale and co invest their patriotic villagers with relatable fears and earthy humour, building to a rousing singalong to Sir Tom Jones’ Delilah over the end credits. Exhilarating race sequences place cameras at the horses’ eye level rather than with the jockeys so we are safely saddled with Dream Alliance until the final furlong.

Find Dream Horse in the cinemas

Felix And The Hidden Treasure (U) 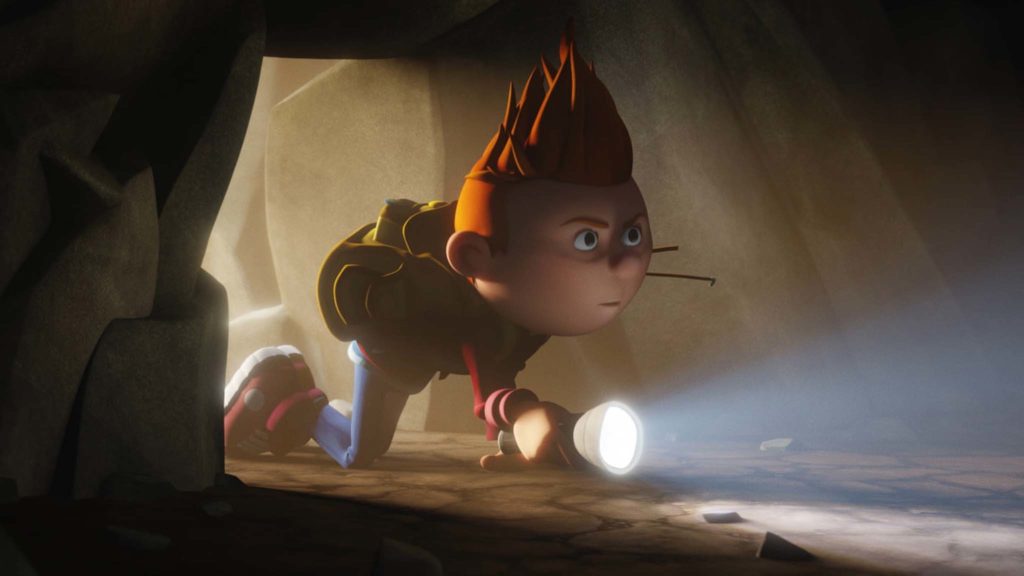 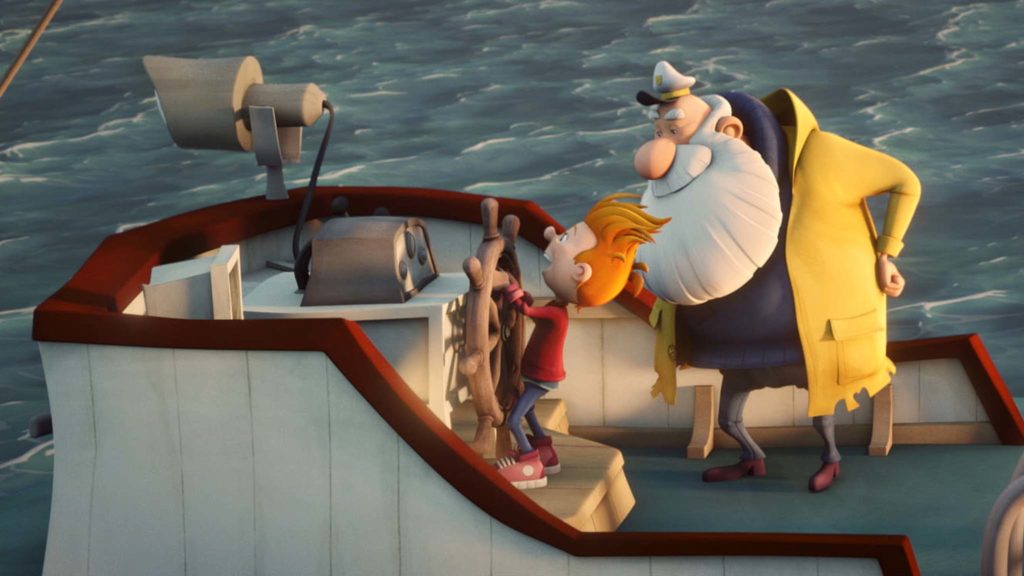 Review: A plucky pre-teen searches for the greatest treasure of them all – his missing father – in a computer-animated odyssey directed by Nicola Lemay, which takes on copious water before the titular tyke discovers the truth about the fabled booty of Darkshadow Island. Accompanied by a rollicking orchestral score composed by Gilles Leveille that is frequently at odds with the pedestrian action on screen, Felix And The Hidden Treasure promises glittering riches but only manages to unearth syrupy father-son bonding and an outlandish quest for eternal life. Visuals are saturated with vibrant colours and the violence is deliberately cartoonish but there is a discernible lack of detail in character designs (a boat captain’s voluminous beard is realised as a single droop of white hair) and action sequences are brief.

Marc Robitaille’s script, adapted for English language audiences by actor Arthur Holden, pads out the running time with superfluous subplots that interrupt the narrative flow. We spend an inordinate amount of time without any emotional payoff in the company of the boorish and egotistical owner of the Very Big advertising agency, who wants to buy Felix’s family home as a summer getaway. An inter-generational life lesson about public displays of emotion from boys (“When I was your age, a young fella would never let himself be seen with tears in his eyes”) feels outdated. There’s no risk of Lemay’s film unleashing a trickle of saltwater.

Two years after Felix (voiced by Daniel Brochu) learnt about the disappearance of his seafaring father Jack (Marcel Jeannin) during a daredevil expedition to Darkshadow Island, the intrepid 12-year-old remains convinced that his old man is alive. Grieving mother Marlene (Holly Gauthier-Frankel) reluctantly embarks on a 10-day tropical cruise, leaving Felix and baby sister Mia in the care of their aunt Annie (Angela Galuppo). Felix fibs about a sleepover with video game-obsessed friend Max (Wyatt Bowen) as a cover to head out to sea in search of Jack in an inflatable dinghy “no bigger than a bath tub”, accompanied by his pet cat Rover.

The boy’s reckless actions almost end in disaster until retired fisherman Old Tom (Vlasta Vrana) and his one-legged green parrot Squawk intervene. The salty sea dog agrees to accompany tearful Felix to Darkshadow Island. Deep within the rocky fortress, the adventurers stumble upon a subterranean idyll ruled by menacing Morgaa (Karine Vanasse), who lures wealthy patrons to her “enlightened community” with the promise of immortality.

Felix And The Hidden Treasure provides a fleeting distraction for young audiences but feels overlong at 85 minutes. Cute animal sidekicks, including a ginger cat which identifies as a dog, are predominantly comic relief except for one unfortunate critter, which is grievously harmed in the making of the film.

Find Felix And The Hidden Treasure in the cinemas 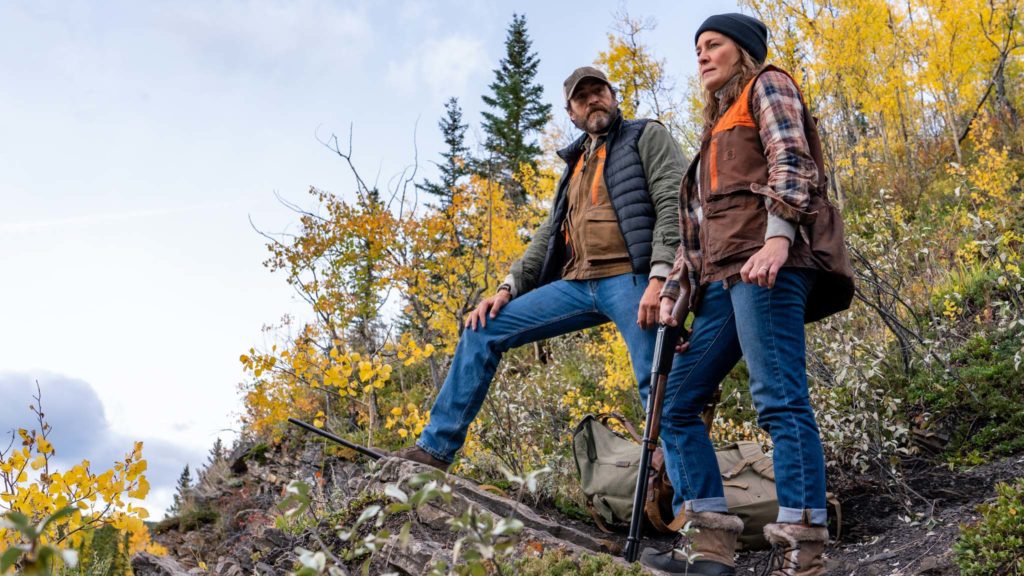 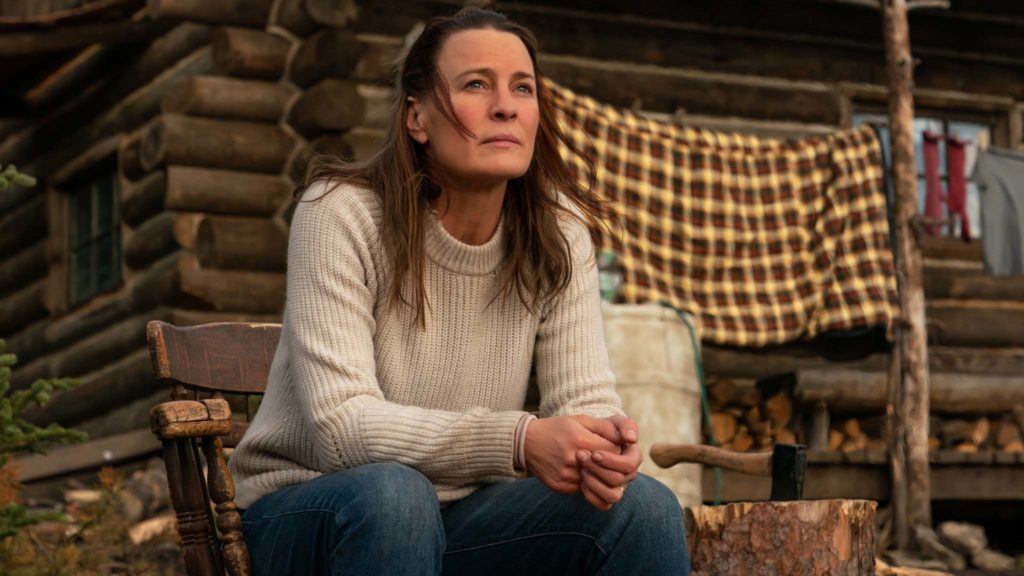 Review: In Jules Verne’s 1875 adventure story The Mysterious Island, Captain Nemo uses his dying breath to impart nuggets of wisdom about his exploits aboard the Nautilus. “Solitude, isolation, are painful things, and beyond human endurance,” surmises the intrepid seafarer. The grief-stricken lead character in actress Robin Wright’s feature directorial debut believes that solitude and isolation are the only way she will ever come to terms with her soul-shattering loss. Her radical course of action – to abandon the home comforts of Chicago for a ramshackle cabin in the snow-capped Rocky Mountains – inspires a handsomely photographed but emotionally light drama of self-healing, which trades heavily in the breath-taking vistas of Alberta, Canada, as a stand-in for the script’s vast canvas of untamed Wyoming.

Wright and co-star Demian Bichir are repeatedly at the mercy of Mother Nature: bathed in heavenly sunshine in bucolic summertime scenes; their frozen breath visible as winter gusts whip the words out of their mouths over undulating blankets of fresh snow. Cinematographer Bobby Bukowski savours every fiery, ombre sunset and dripping icicle, hanging like a glistening dagger from the cabin’s roof.

Screenwriters Jesse Chatham and Erin Dignam aren’t afraid of extended periods of silence, when Wright has to carry the crushing weight of her character’s sadness with wordless anguish and determination. Those interactions between leading lady and an unforgiving environment are the most compelling aspects of Land. When characters disgorge their inner turmoil, it sometimes feels dramatically necessary rather than natural and running jokes involving Star Wars and the Tears For Fears pop rock anthem Everybody Wants To Rule The World skirt perilously close to cute contrivance.

Edee (Wright) is haunted by beautiful phantoms of her husband Adam (Warren Christie) and young son Drew (Finlay Wojtak-Hissong). She openly discusses the pointlessness of life with her sister Emma (Kim Dickens), who pleads with Edee to battle through the darkness: “Don’t hurt yourself… for me.” Edee entrusts her fate to Mother Nature in a remote cabin with a wood-burning hearth. She is ill-prepared for the invasion of a hungry bear and as the cold and starvation take a vicelike grip, Edee prepares to join Adam and Drew, until a kindly hunter called Miguel (Bichir) and his nurse friend Alawa (Sarah Dawn Pledge) intervene in the nick of time.

Land is an assured study of one woman’s reawakening in the aftermath of tragedy. Wright is fiercely committed to the physical rigours of her role (“I’m here because I choose to be,” Edee defiantly assures Miguel and Alawa) and she sparks delightful screen chemistry with Bichir. Writers Chatham and Dignam risk weakening that partnership with a heavy-handed and manipulative denouement that feels like an easy victory after so much tortured introspection.

Find Land in the cinemas 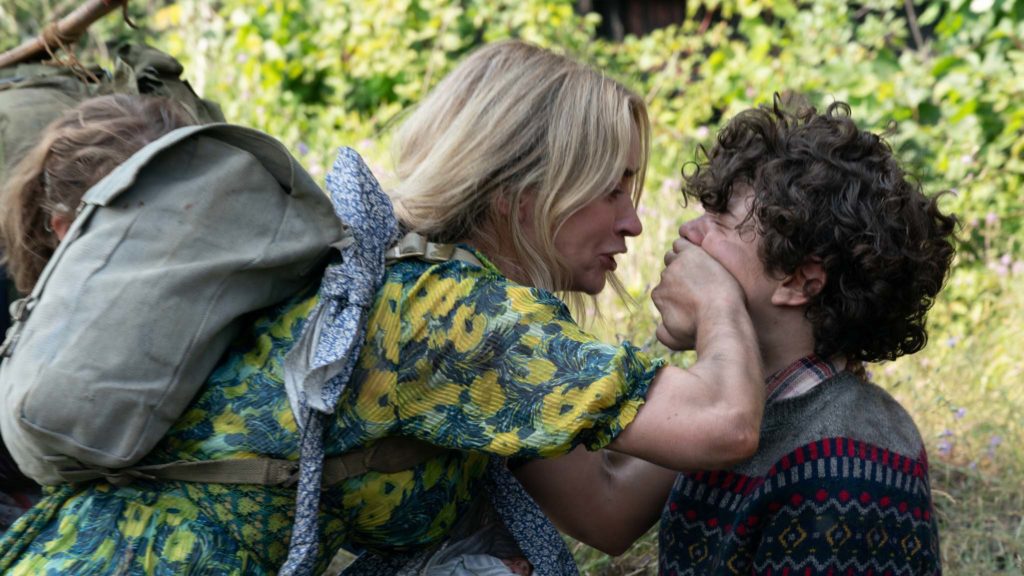 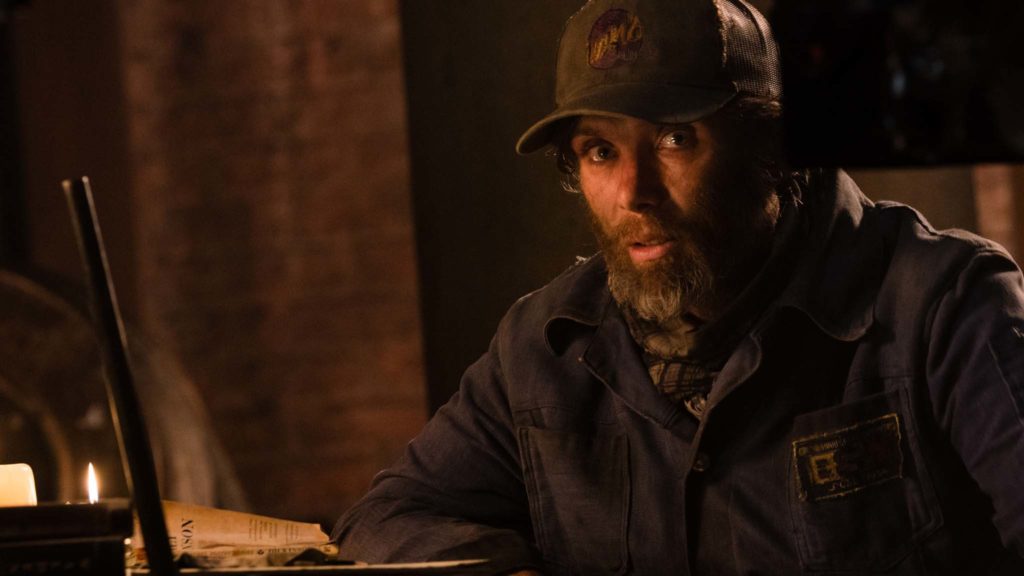 Review: I vividly recall watching A Quiet Place in a hushed cinema, palpably aware that people around me were neglecting to burrow sticky fingers into tubs of noisy popcorn for fear of breaking the silence. Writer-director John Krasinski’s nerve-shredding sci-fi horror was an intensely visceral big screen experience that invited us to hold our breath (and nerve) as a family of four battled sightless extra-terrestrial invaders which hunt by sound. The lean, pulse-quickening sequel is a perfect film to woo thrill-starved audiences back into socially distanced cinemas. Part II ventures beyond the family’s sprawling farm to meet other survivors of the extermination, whose morality has been irrevocably warped by their close encounter with the aliens.

A protracted flashback to day one of the invasion, breathlessly staged by Krasinski as a series of adrenaline-pumping stunts, cleverly turns up the volume on the blood-curdling screams, gunshots and explosions before attention shifts forward 15 months to the eerie serenity of a planet devoid of noise pollution. Conveniently flawed logic from the first film proliferates and we can anticipate some of the jolts now but Part II has a couple of nail-biting tricks up its sleeve. Cameos from Scoot McNairy and Djimon Hounsou catalyse a sickening realisation that the otherworldly predators might not be the biggest threat to the Abbott family’s survival.

Carrying her newborn in her arms, Evelyn shepherds the family through the post-apocalyptic wilderness. In an abandoned steel mill, they encounter dishevelled family friend Emmett (Cillian Murphy), who has turned his back on the possibility of humankind retaliating against the creatures. “The people that are left, they’re not the kind of people worth saving,” Emmett warns Evelyn with sunken eyes, glistening with pain. A radio signal from a nearby island rekindles hope and teenager Regan urges her terrified brother to follow the courageous example of their father (Krasinski) and never give up. “Look what happened to him!” angrily snaps Marcus.

A Quiet Place Part II falls tantalisingly short of the stomach-churning suspense of the first film and Krasinski’s script doesn’t boast a stand-out scene to rival the rusty nail or bathtub birth. However, he knows how to mercilessly dial up distress, eliciting strong performances from wife Blunt and young co-stars Simmonds and Jupe, who savour increased screen time as plot strands diverge. Spielbergian influences are evident in set pieces but Krasinski’s rapacious ETs have no intention of phoning home.