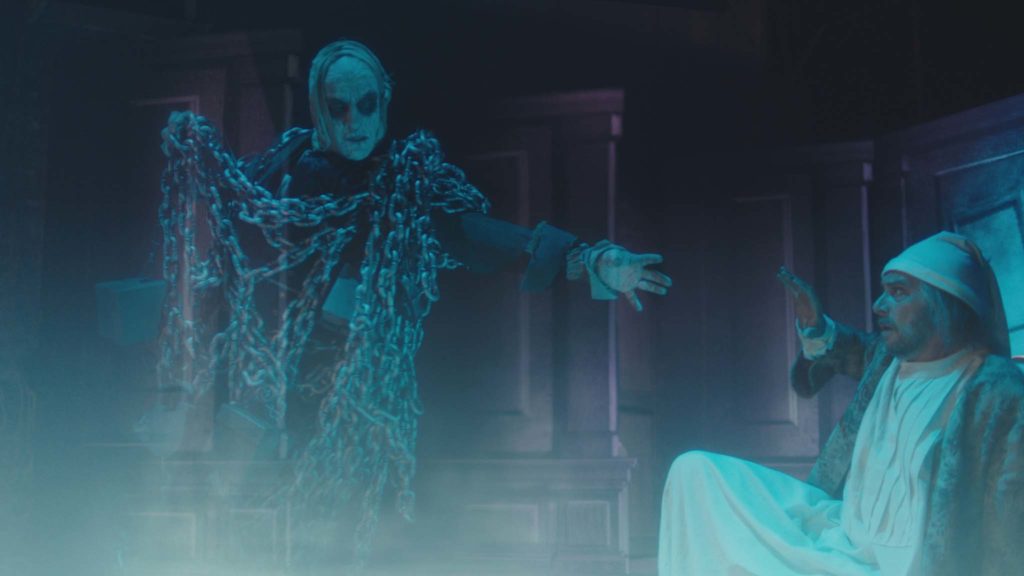 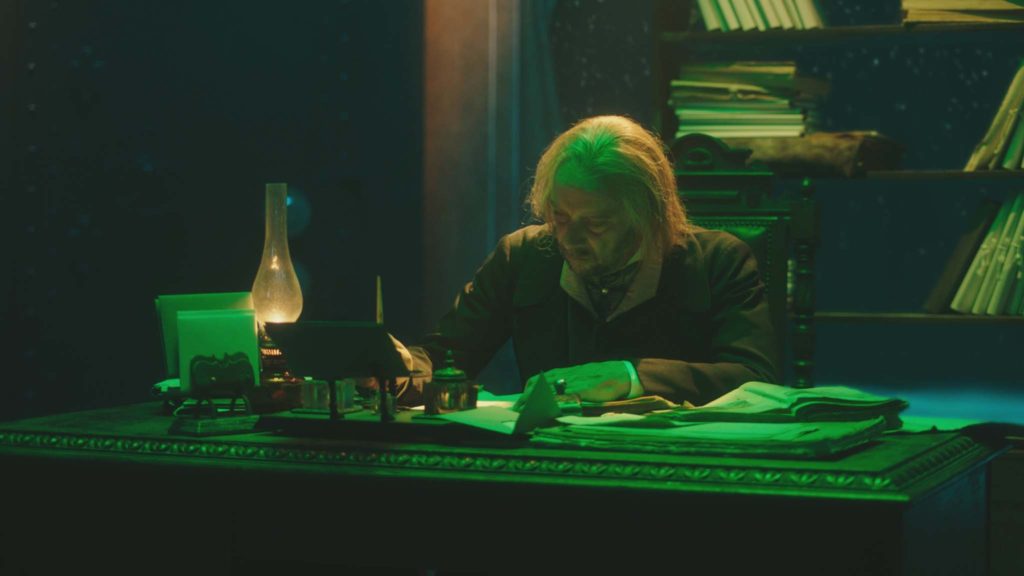 Review: Expressive movement and spoken narration are exceedingly happy bedfellows in Jacqui Morris and David Morris’ dance drama adaptation of Charles Dickens’ seasonal fable. Imagined as a paper theatre production which magically comes to life, A Christmas Carol swoons to the fluid choreography of Olivier Award winner Russell Maliphant, who thaws out characters from frozen poses on snow-laden streets and visualises the ghost of Jacob Marley as a whirling dervish weighed down by his cloak of chains. A tender duet between young Scrooge and his sweetheart artfully pirouettes around the money lender’s office to a piano solo of the traditional Christmas carol God Rest You Merry, Gentlemen, which plucks our heartstrings with the introduction of a violin’s tremulous lament.

David Morris’ screenplay retains Dickens’ poetic prose almost word for word – “There’s more of gravy than of grave in you” – but there are some neat flourishes like a grey clockwork mouse, which skitters about the floor of Scrooge’s home, and a brutal assault that trades effectively in the athleticism of four dancers.

The Ghost Of Christmas Past (Dana Maliphant, voiced by Leslie Caron) reminds Scrooge of happier times as an apprentice to businessman Mr Fezziwig (Andrey Kaminsky, voiced by Colin Mace). The Ghost Of Christmas Present (Mikey Boateng, voiced by Daniel Kaluuya) and the Spirit Of Yet To Come reveal the sobering fortunes of Scrooge’s underpaid clerk Bob Cratchit (Karl Fagerlund Brekke, voiced by Martin Freeman), his wife (Hannah Kidd, voiced by Lorraine Ashbourne) and their desperately ill youngest child, Tiny Tim (Danil Golovam, voiced by Archie Durrant). Scrooge resolves to learn the “latent moral for his own improvement”.

A Christmas Carol employs simple but effective visual effects to meld real and phantasmagorical elements without losing sight of the evergreen moral lesson that facilitates Scrooge’s rebirth. Sonorous vocal performances complement the dancers’ actions as cameras waltz around sets torn from the pages of The Illustrated London News. The generosity and enduring power of the human spirit thrums in every frame. God bless us everyone.

Find A Christmas Carol in the cinemas 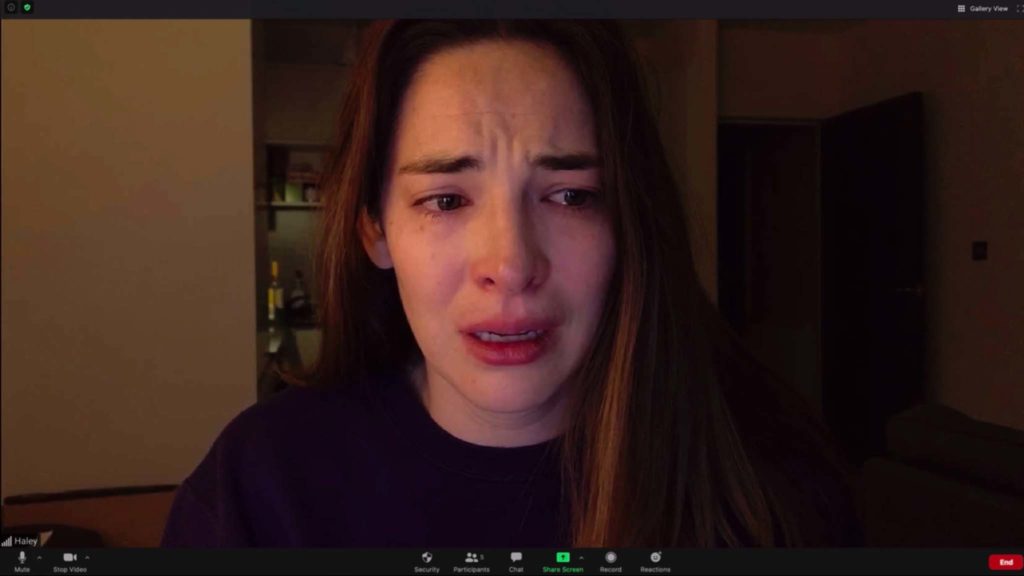 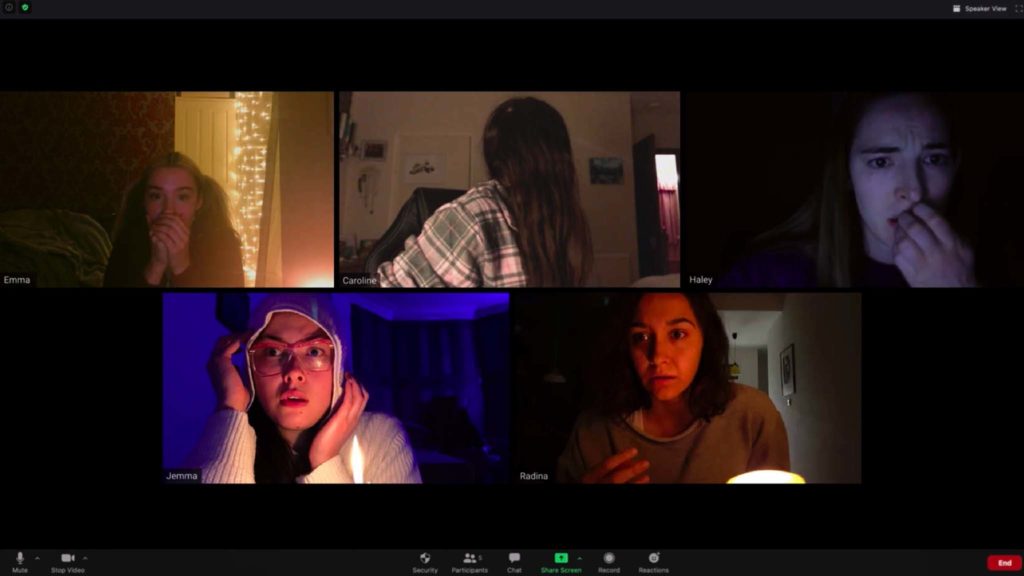 In 2014, low budget horror Unfriended used a video call between pals to take the philosophical concept of a ‘ghost in the machine’ to the outlandish next level. Savage’s film attempts the same trick albeit with some artistic licence – a free 40-minute Zoom call during one balmy evening in July is stretched to 54 minutes of screen time – and obvious nods to The Blair Witch Project and Paranormal Activity with some jump-out-of-seat scares. For the most part, the nimble dramatic conceit works well although the extended use of the flash of a Polaroid camera to illuminate darkened rooms feels increasingly contrived.

In the midst of the first national lockdown, Haley (Haley Bishop) organises a Zoom video call with five friends: Caroline (Caroline Ward), Emma (Emma Louise Webb), Jemma (Jemma Moore), Radina (Radina Drandova) and Teddy (Edward Linard). The first five minutes are filled with light-hearted banter and pleasantries. Caroline playfully scolds her father (Patrick Ward) for venturing outside for groceries when he could shop safely online, Radina rolls her eyes when she momentarily exhibits a symptom of Covid (“People are not allowed to cough any more. It’s ridiculous!”) and Teddy complains about having to curb his boisterous tendencies while he bubbles with girlfriend Jinny (Jinny Lofthouse).

Haley invites her pal Seylan (Seylan Baxter) into the chat room to conduct an online seance. Caroline is nervous – “Can’t we just do a board game?”- but Seylan attempts to allay the group’s fears even though, in her own words, they will be “slightly less protected” by summoning spirits remotely rather than standing together in a circle with hands linked.

Host is an unsettling exercise in sustained tension that makes the most of the physical restrictions of filmmaking during an outbreak. The cast operate their own cameras and a frenetic finale engineers a couple of truly gob-smacking moments that scratch our nerves and mercilessly exploit universal fears of things that go bump in the night.

Find Host in the cinemas 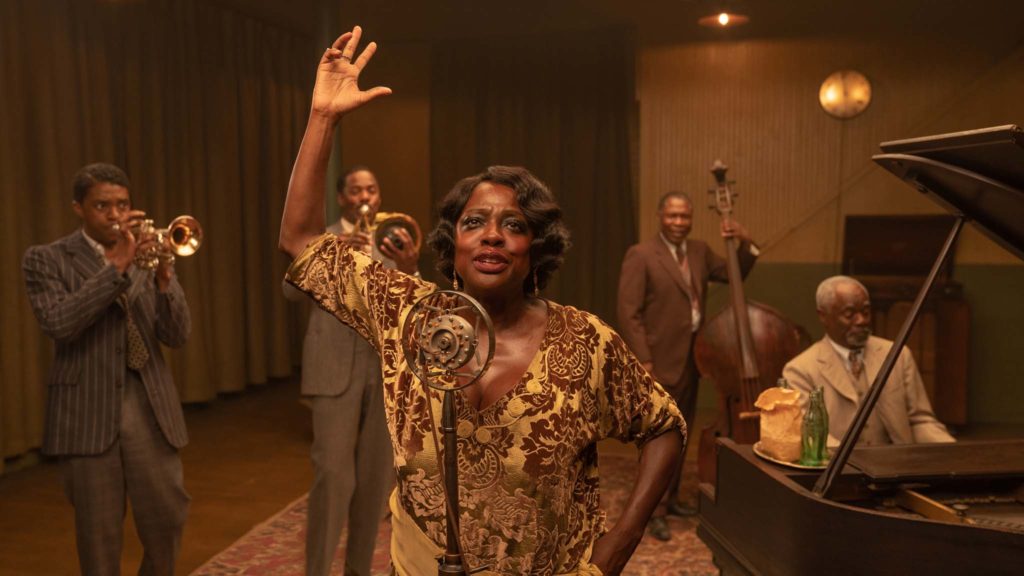 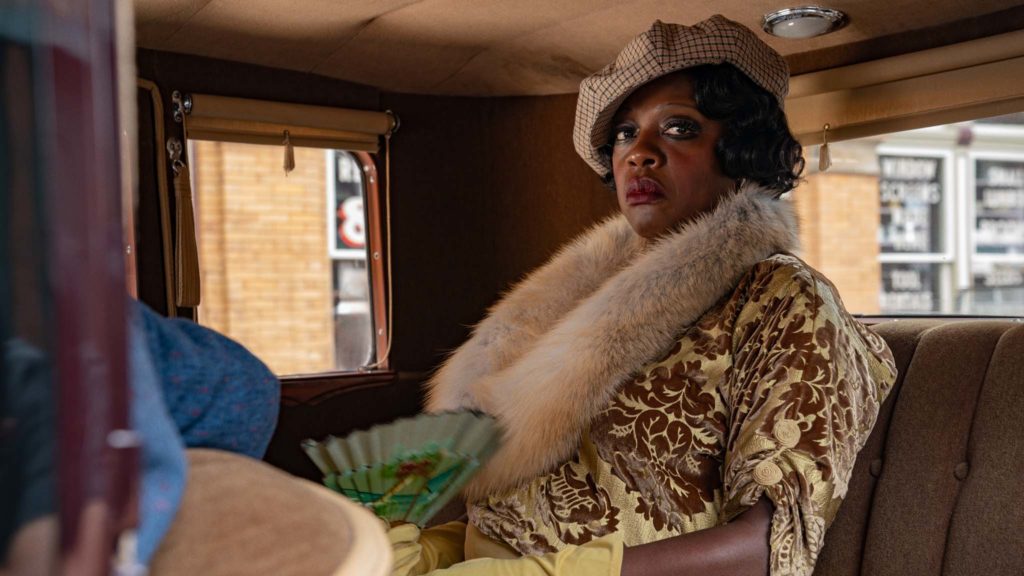 Review: In a year which has galvanised global support for the Black Lives Matter movement, a film version of Ma Rainey’s Black Bottom – the second entry of August Wilson’s 10-strong cycle of plays documenting the African American experience – was always destined to be a cultural touchstone. The death of Chadwick Boseman in August, four years after a colon cancer diagnosis which he kept private from Black Panther fans, intensifies the emotional resonance of George C Wolfe’s beautifully crafted picture and solidifies this study of white exploitation in 1927 Chicago as a frontrunner for the 2021 Academy Awards.

An elegant dedication to Boseman “in celebration of his artistry and heart” after the screen fades to black acknowledges a powerhouse final performance. As a fiery-tempered trumpeter, who is scarred by tragedy as a child and blinded by ambition as a broken man, he doesn’t strike a single false note and delivers a centrepiece monologue with tightly coiled despair and fury. In the showy title role, Viola Davis bristles with righteous indignation as her bisexual singer fights openly for every privilege that her God-given talent affords her. After one heated exchange with white studio producers, she sagely observes: “They don’t care nothin’ about me. All they want is my voice.”

Four musicians – trombonist Cutler (Colman Domingo), trumpeter Levee (Boseman), bassist Slow Drag (Michael Potts) and pianist Toledo (Glynn Turman) – arrive at a recording studio in the heart of Chicago to prepare for a session with formidable singer Ma Rainey (Davis). Before Ma arrives, Levee tells other members of the band that he intends to branch out on his own. Cutler reminds the ambitious upstart of his responsibilities – “You play whatever Ma say” – but Levee refuses to surrender a tight grasp on his dream, boldly proclaiming, “I ain’t like you Cutler. I got talent”.

When Ma finally blows in from the street with her stuttering nephew (Dusan Brown) and companion Dussie Mae (Taylor Paige) in tow, her volcanic temper prickles studio producers Sturdyvant (Jonny Coyne) and Irvin (Jeremy Shamos). The heat inside the studio rises and Levee’s arrogance puts him on a collision path with Ma and the rest of the band.

Ma Rainey’s Black Bottom doesn’t stray far from strong theatrical roots. Ruben Santiago-Hudson’s adaptation relishes the interplay between characters, allowing the natural rhythm of dialogue to dictate pace. Director Wolfe avoids flashy improvisations behind the camera. He has the benefit of the sheet music of myriad stage productions including a 2003 Broadway production pairing Whoopi Goldberg and Charles S Dutton and an Olivier Award-winning 2016 revival at the National Theatre in London, which ran 40 minutes longer and allowed underlying tensions to simmer before turning up the heat to a furious boil.