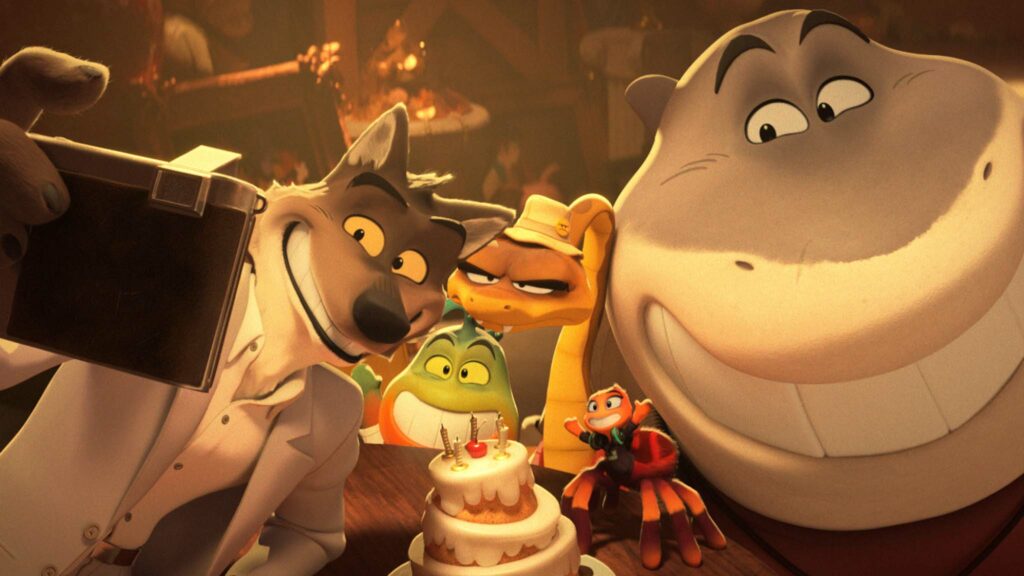 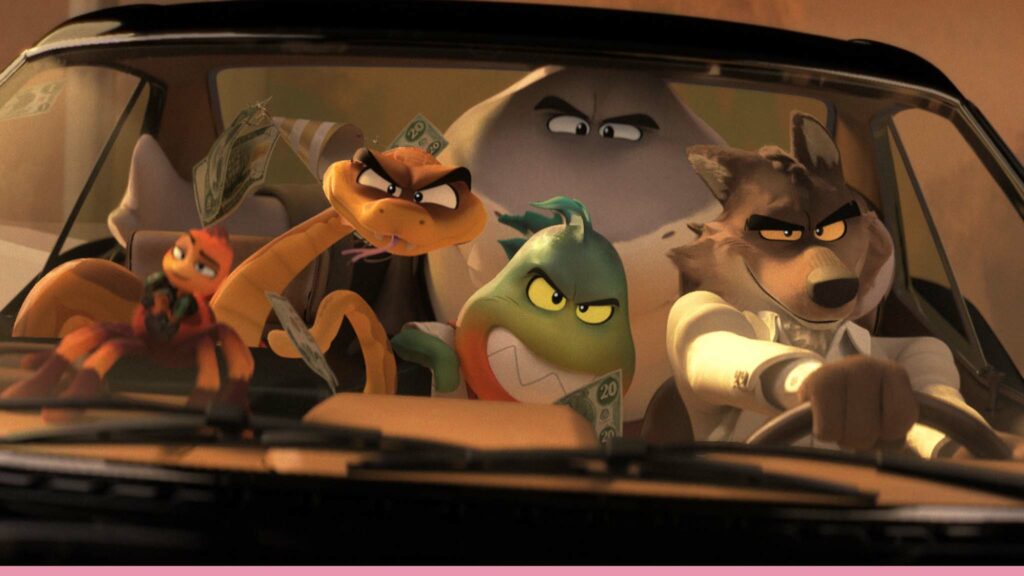 Review: Leopards can change their spots – or at least apply make-up to cleverly conceal them – in a madcap computer-animated creature feature directed by Pierre Perifel. Based on a series of graphic novels for younger readers penned by Aaron Blabey, The Bad Guys unfolds in a heavily stylised world where humans and anthropomorphic critters co-exist in uneasy harmony. The wise-cracking anti-heroes of this concrete jungle are five bank robbers led by a debonair wolf, whose hare-brained heists nod reverentially to Ocean’s Eleven to the point that when the lupine leader sweet-talks one clued-up target, she pithily counters, “don’t Clooney me!”

Scriptwriter Etan Cohen atones for the deplorable 2018 comedy Holmes & Watson with snappy dialogue, colourful characterisation and brisk pacing, including at least one rug-pulling plot twist and the loopy liberation of thousands of helpless guinea pigs from an animal laboratory. A running gag involving noxious flatulence whiffs well before the 100 minutes are up but gags hit more often than they miss and a distinctive aesthetic melds traditional 2D hand-drawn artistry with digital wizardry to eye-popping effect

The light-fingered quintet live cheek by jowl with terrified humans in a city where they repeatedly torment fiery-tempered police chief Misty Luggins (Alex Borstein) by pulling off ingenious bank robberies. “We may be bad but we’re so good at it!” grins Mr Wolf during a getaway car chase after one daredevil heist.

When the crew botches the theft of The Golden Dolphin statuette from the Museum of Fine Arts under the snout of Governor Diane Foxington (Zazie Beetz), guinea pig philanthropist Professor Rupert Marmalade IV (Richard Ayoade) offers Mr Wolf and his associates an alternative to time behind bars. They can take part in a social experiment to perform good deeds rather than criminal acts. Marmalade’s proposal defies Mr Wolf’s cherished mantra – “Go bad or go home” – but the robbers are willing to test the guinea pig’s theory and avoid a prolonged spell in Super Ultra Crazy Max (SUCM) confinement.

The Bad Guys melds Zootropolis and Despicable Me for a simplistic yet crowd-pleasing behavioural study laden with slapstick and heart-warming lessons about putting the needs of others before your own. Energetic vocalperformances match the high tempo of Cohen’s writing and director Perifel pilfers our attention with logic-defying action set pieces.

Find The Bad Guys in the cinemas 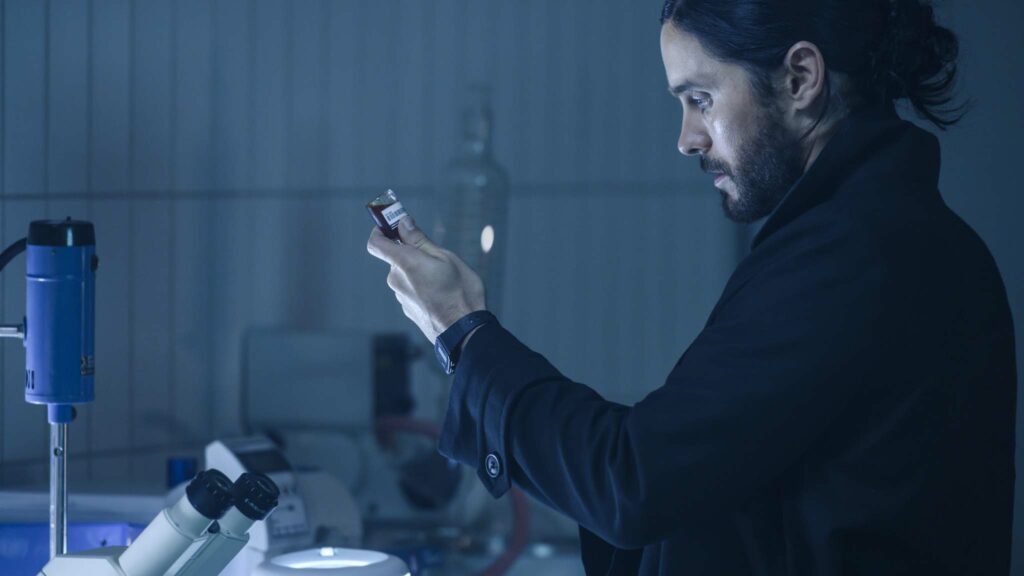 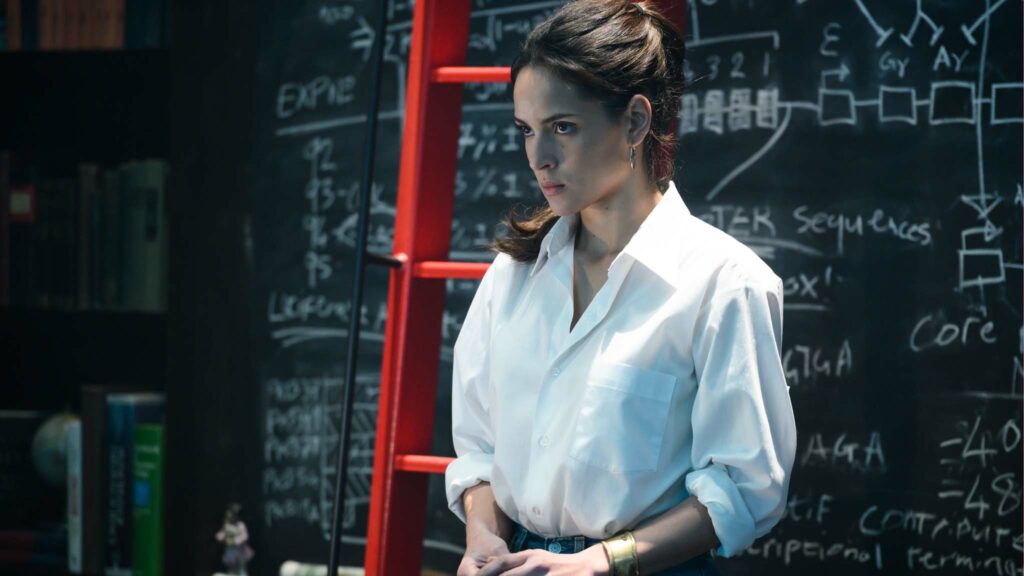 Review: The month’s second origin story of a tortured, self-destructive crusader with a curious kinship to demonised flying mammals spills just as much blood as The Batman, also conducts most of its action sequences under a cloak of darkness and boasts another 15 certificate for strong threat and violence. However, this first dance of death with a Nobel Prize-winning scientist played by Jared Leto clocks in 72 minutes shorter than the tour of Gotham City and feels exsanguinated like some of the title character’s victims.

Based on the Marvel Comics anti-hero created by Roy Thomas, Daniel Espinosa’s horror unfolds in juddering, desperate spurts like a freshly severed artery. Characters are nonchalantly side-lined, confrontations are rushed and emotion is swept away by a tsunami of wearisome digital effects. Less is Morbius.

Leto brings a steely intensity to the eponymous medical pioneer, who injects himself with a top-secret serum and blossoms from withered weakling to shirtless sex god. His metamorphosis into a crazed predator with echolocation crescendos with slow motion Matrix-style bullet dodging and brief flashes of moribund humour. Screenwriters Matt Sazama and Burk Sharpless orchestrate a promising opening to sketch fraternal bonds across 25 years and justify a “highly experimental, ethically questionable” scientific endeavour that tampers with DNA from humans and bats.

Dr Morbius is afflicted with a rare blood disorder and has dedicated a life racked with physical pain to engineering a cure for himself and wealthy best friend Milo (Matt Smith). In pursuit of a medical breakthrough, Michael travels to Costa Rica to harvest a particularly ferocious breed of bat. “I should have died years ago,” Michael reminds concerned colleague and token love interest Dr Martine Bancroft (Adria Arjona). “Why am I still alive if not to fix this?”

Ignoring the cautious approach of his mentor (Jared Harris), Michael takes a dangerous gamble that revitalises his ravaged body but the six pack and swagger are temporary and come at a terrifying price. He must hunt human prey and drink blood to feed the darkness that has been unleashed. A rampage to quench this thirst places Michael squarely in the sights of FBI agents Rodriguez (Al Madrigal) and Stroud (Tyrese Gibson) but there is an insidious threat closer to home.

With Spider-Man: No Way Home web-slinging to sixth place in the highest grossing films of all time and a third Venom film currently in development, Morbius expands the comic book universe inhabited by Peter Parker and his adversaries. It’s a relentlessly grim chapter with one cute sight gag – the cargo ship where Michael conducts his experiment is christened the LGV Murnau, a tribute to the German director of the 1922 vampire film Nosferatu. Espinosa intentionally leaves plot threads hanging to justify a sequel. Without a script transfusion, no fangs.

Find Morbius in the cinemas 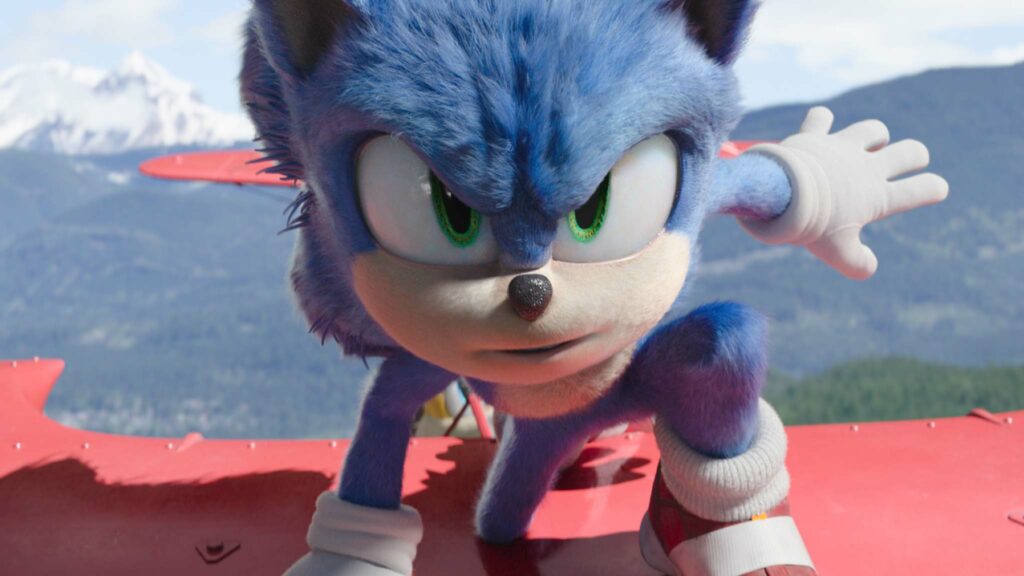 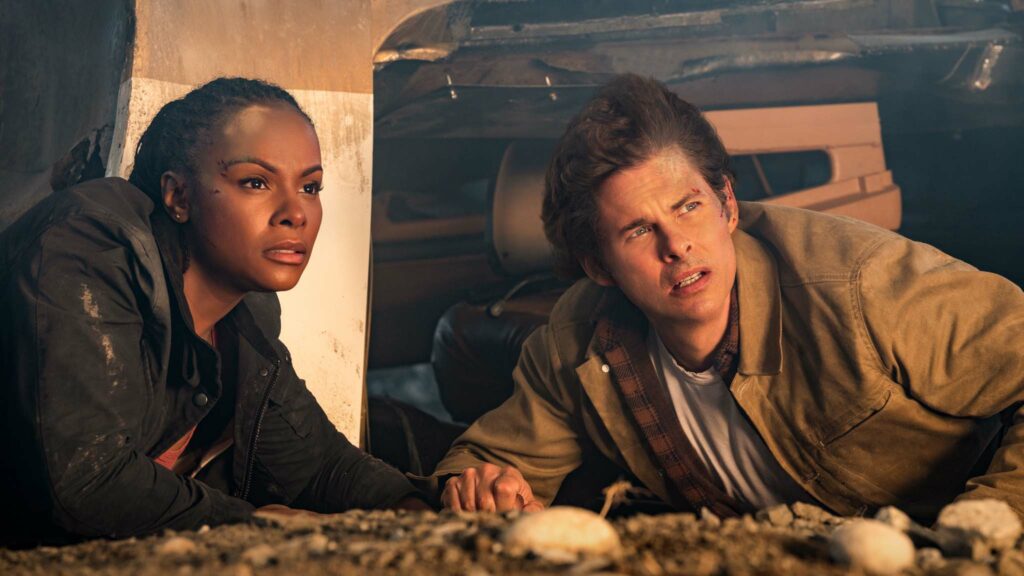 Review: The turbo-charged blue hedgehog from the Sega video game franchise lives to spin another day in a rambunctious sequel, helmed by returning director Jeff Fowler, which delivers comparable thrills and spills to its 2020 predecessor. Calibrated to appeal to young audiences with breathless action sequences, broad physical humour and the rubber-faced tomfoolery of Jim Carrey as deranged arch-villain Dr Ivo Robotnik, Sonic The Hedgehog 2 follows the Marvel Cinematic Universe template with the introduction of the shadowy Guardian Units of Nations (G.U.N.), which protects Earth from extra-terrestrial threats, and a big reveal nestled in the end credits.

The original video game was released more than 30 years ago so there is a rich seam of intellectual property to mine. A third film is already in development along with a spin-off feature for Knuckles, the red echidna assassin voiced with growling intent by Idris Elba, who is determined to honour the memory of his late father – a pleasing parallel to Sonic’s loss of a mother-figure in the first film.

Ben Schwartz continues to infuse the title character with childlike exuberance but Carrey inevitably steals every scene with his outlandish theatrics, aided by voluminous face fur. “Papa’s got a brand new ‘stache!” he guffaws in between sips of latte with steamed Austrian goat’s milk courtesy of a sycophantic sidekick (Lee Majdoub).

After 243 days in “portobello purgatory” on the Mushroom Planet, Dr Robotnik successfully harnesses the power of a discarded blue hedgehog quill to send a distress signal across the universe. Knuckles answers that plea and join forces with Robotnik to locate the Master Emerald – an ancient power source once guarded by Sonic’s owl mentor, Longclaw (Donna Jay Fulk).

Owls and echidnas have been at war for centuries. “Like Vin Diesel and The Rock,” cheekily quips Robotnik, referencing the long-running public feud between Fast & Furious co-stars. The quest for the gem leads to Earth where Sonic (Ben Schwartz) lives in Green Hills with sheriff Tom Wachowski (James Marsden) and his wife Maddie (Tika Sumpter).

While his surrogate parents are away in Hawaii for the wedding of Maddie’s sister Rachel (Natasha Rothwell), Robotnik and Knuckles decimate the Wachowskis’ home searching for the fabled emerald. Sonic vows to defeat the echidna assassin and Robotnik’s mechanised army aided by a new ally: flying fox Tails (Colleen O’Shaughnessey), teased briefly at the conclusion of the first film.

Sonic The Hedgehog 2 ups the action ante with a snowboarding sequence that pokes fun at the MCU and a final showdown against a gargantuan version of an automaton from the video games. A flimsy plot cannot sustain the two-hour running time but Carrey is an endless power source of unbridled impish delight.

Find Sonic The Hedgehog 2 in the cinemas