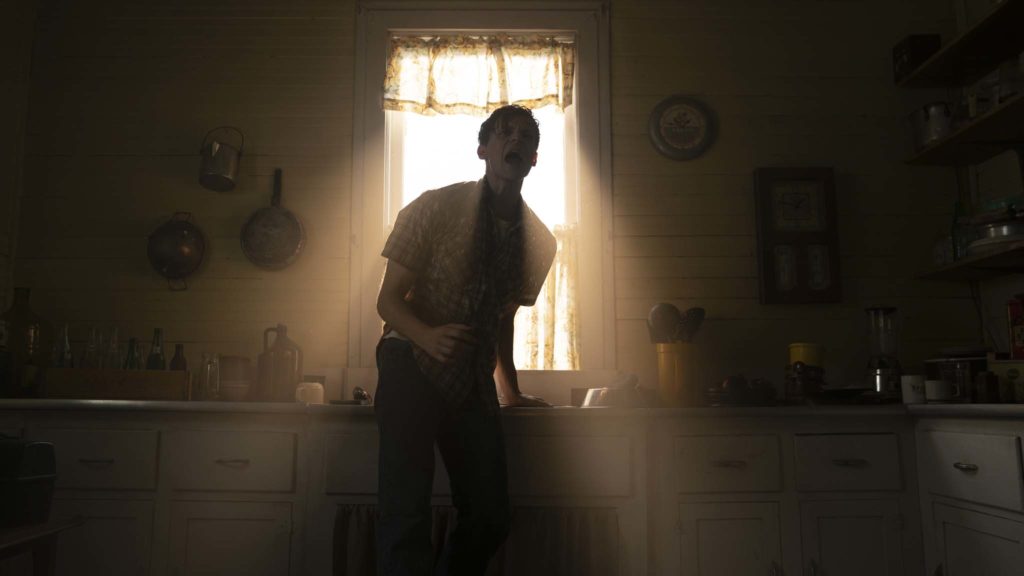 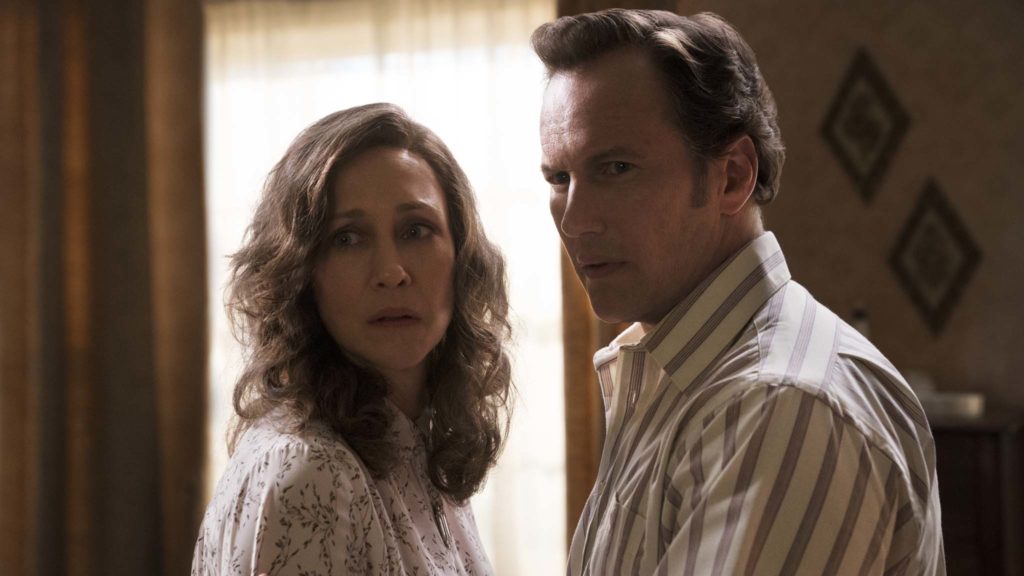 Review: In 1981, Arne Cheyenne Johnson made US legal history when defence counsel for the 19-year-old responded to a murder charge in the sleepy Connecticut town of Brookfield with a plea of not guilty by reason of demonic possession. Paranormal investigators Ed and Lorraine Warren supported Johnson’s case, linking the teenager’s grim fate to the exorcism of his girlfriend’s 11-year-old brother a few months earlier. Disturbing true events are heavily dramatised for the purposes of jump-scare entertainment in the latest chapter of the long-running horror franchise comprising two Conjuring films, Annabelle, Annabelle: Creation, The Nun and Annabelle Comes Home.

Director Michael Chaves repeats many of the tricks of his debut feature, The Curse Of La Llorona, to embellish real-life courtroom drama with almost two hours of satanic rituals, flickering black candles and a reanimated corpse. Patrick Wilson and Vera Farmiga reprise their roles as the Warrens, whose unerring love for each other – captured in golden-hued flashback – is more powerful than The Bible and holy water when it comes to banishing demons from whence they came. The Conjuring: The Devil Made Me Do It fits snugly into the series mythology and includes an obligatory glimpse into the Warrens’ locked basement of dangerous artefacts.

Alas, the paranormal investigator suffers a heart attack and by the time he regains consciousness, Arne has stabbed Debbie’s boss Bruno (Ronnie Gene Blevins) 22 times. The prosecution seeks the death penalty but Ed and Lorraine are convinced they can prove demonic possession. “That kid is either gonna live or die depending on what you find,” Arne’s lawyer (Ashley LeConte Campbell) warns the Warrens as they seek help from a retired police officer (John Noble) with intimate knowledge of satanic practices.

The Conjuring: The Devil Made Me Do It dips into a grab bag of familiar tricks, manifesting tormentors in dark corners or behind characters as returning composer Joseph Bishara turns up the volume on the string section. A centrepiece sequence on a rippling water bed opts for a predictable pay-off rather than splashy originality. Farmiga takes a more active role since Wilson’s spouse risks a potentially fatal second heart attack from exertion. She drifts between planes of consciousness in search of answers that we have already deduced without the gift of foresight.

Find The Conjuring: The Devil Made Me Do It in the cinemas 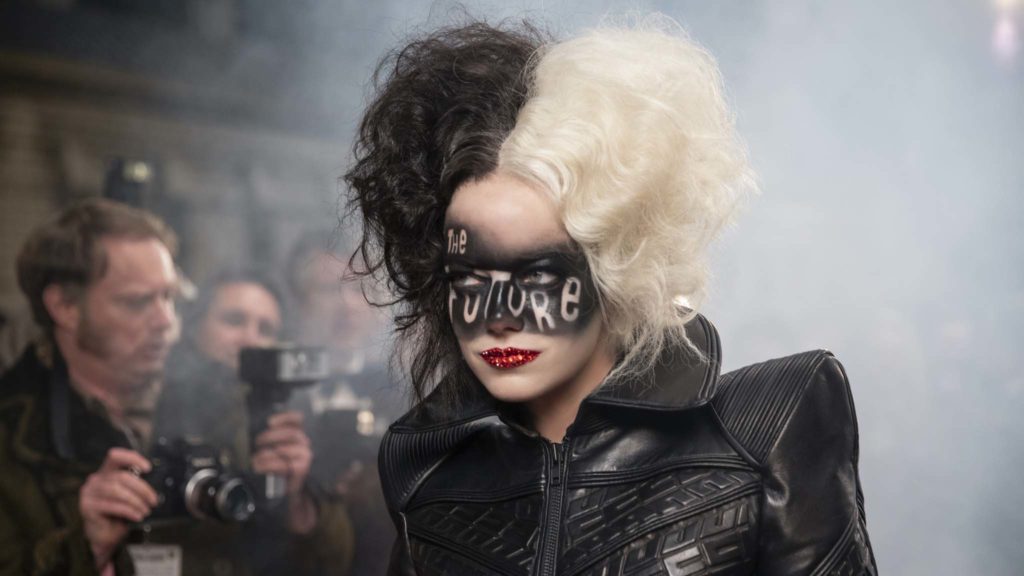 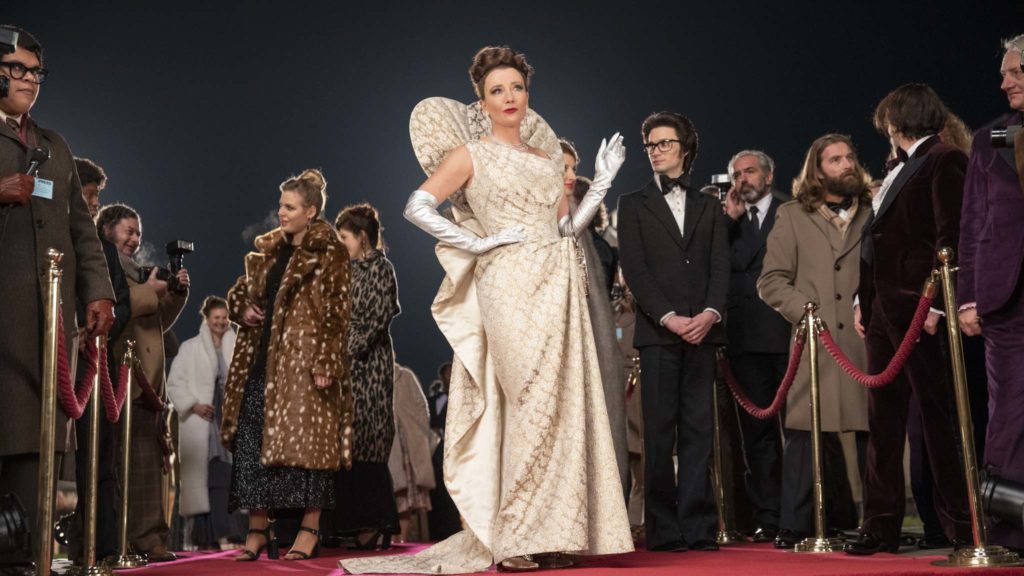 Review: In lyrics composed by Mel Leven for the 1961 Disney animation One Hundred And One Dalmatians, Cruella de Vil is described as an inhuman beast and “a spider waiting for the kill”. Director Craig Gillespie’s couture-crazy caper gives birth to a younger and warmer incarnation of the fur-obsessed villainess from Dodie Smith’s 1956 children’s novel, rooting the character’s misery in an ill-fated encounter with three spotty dogs at a lavish soiree. The punk rock revolution of 1970s London is a vivid backdrop to the skulduggery and a deep well of inspiration for production designer Fiona Crombie and costume designer Jenny Beavan, who unleash a whirligig of bold colours and patterns.

Cruella is a heaving banquet for the eyes, laden with show-stopping looks for lead actresses Emma Stone and Dame Emma Thompson as competing talents in the cutthroat world of fashion. Co-writers Dana Fox and Tony McNamara serve up a slightly less bountiful feast, which honours Dodie Smith’s source material and warmly embraces representation, including an unapologetically self-expressive character played by John McCrea, Olivier Award-nominated star of stage musical Everybody’s Talking About Jamie. Voiceover narration from the eponymous troublemaker strikes an irreverent tone which leeches into every frame and harks back to the script’s most memorable line: “Normal is the cruellest insult of them all.”

Haunted by the death of her mother (Emily Beecham), resourceful orphan Estella (Stone) thrives on the streets of London by befriending thieves Jasper (Joel Fry) and Horace (Paul Walter Hauser), whose rooftop hideout boasts spectacular views of the capital. The larcenous trio pulls off small-scale heists in disguises designed and sewn by Estella. Her sartorial gift catches the eye of Baroness von Hellman (Thompson), ferociously haute creative director of a revered fashion label.

She hires Estella as an assistant and shamelessly steals the ingenue’s ideas for a spring collection. Tension between the women kindles full-blown conflict and Estella unmuzzles her vengeful alter ego, Cruella, assisted by society columnist Anita Darling (Kirby Howell-Baptiste) and vintage fashion devotee Artie (McCrea). “She has made it me or her,” snarls the baroness, “and I choose me!”

Cruella is cut to the template of a comic book origin story with tragedy as a catalyst for rebirth, dual identities and a descent into madness and rabble-rousing rebellion that draws comparisons with Joaquin Phoenix’s Joker. Stone does not fully embrace the darkness within the constraints of a 12A certificate family film, but she has fun nudging her anarchist towards the edge while Thompson gleefully tramples everyone who gets in her adulation-hungry doyenne’s path. Verbal warfare between the two women, laced with wit and bile, recalls scriptwriter McNamara’s Oscar-nominated work on The Favourite. Director Gillespie could trim his design closer to two hours but his minxy title character does not exercise restraint so he follows her lead.

Find Cruella in the cinemas

Earwig And The Witch (PG) 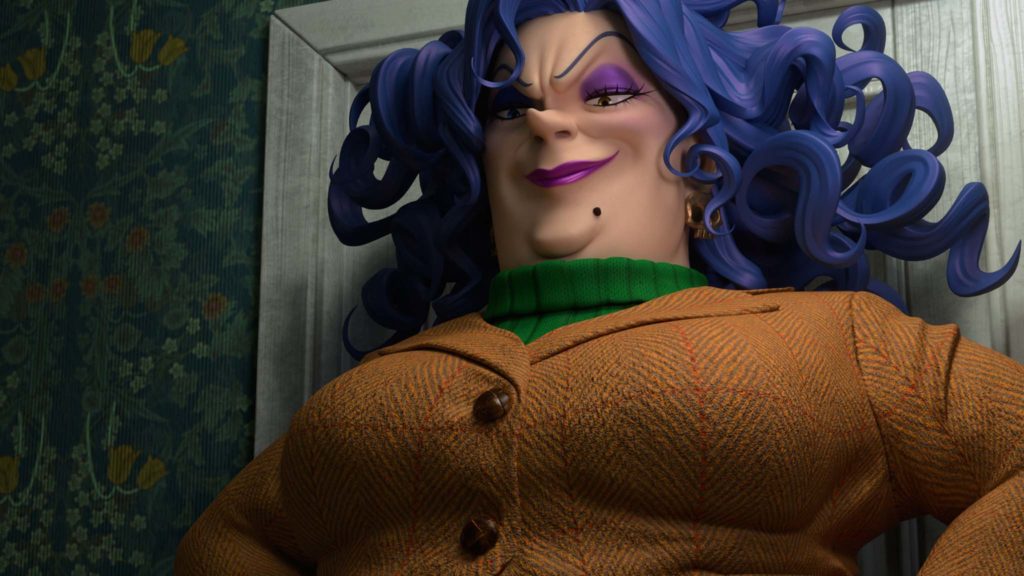 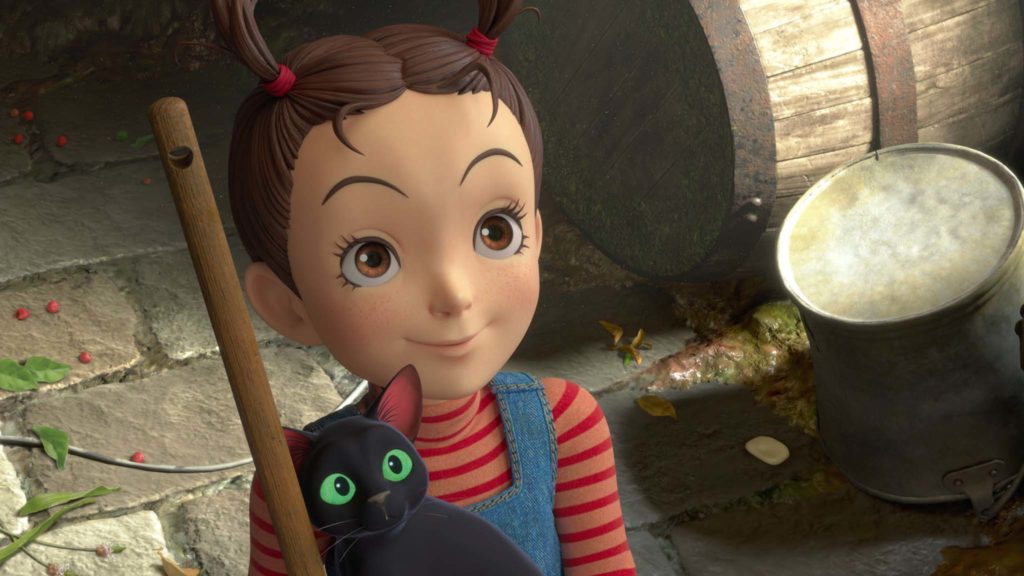 Review: Tokyo-based Studio Ghibli has blazed a trail in emotionally rich animated films since the 1986 release of Castle In The Sky written and directed by company co-founder Hayao Miyazaki. In 2003, Miyazaki’s wildly imaginative fantasy Spirited Away became the first hand-drawn film not in the English language to win an Academy Award as Best Animated Feature – an honour it retains to this day. The studio’s last four films, The Wind Rises, The Tale Of The Princess Kaguya, When Marnie Was There, and The Red Turtle, earned consecutive Oscar nominations. That run of rich form comes to a screeching halt with Earwig And The Witch.

Adapted from the novel by Diana Wynne Jones, this slick yet soulless yarn bears almost none of the Ghibli trademarks, trading in the expressive hand-drawn visuals for unimpressive 3D computer animation as a plodding script addresses a 10-year-old girl’s close encounter with magic under the direction of Miyazaki’s son Goro. Characters are so thinly sketched they could almost be translucent including the spunky and unsympathetic title character, and the studio’s usually skilful tugging of heartstrings never materialises.

A cherubic baby girl is deposited on the steps of St Morwald’s Home For Children by her magically gifted mother (voiced by Kacey Musgraves), who is on the run. Apart from a handwritten note, the only possession left with the baby is a cassette tape inscribed with a single word – Earwig. Matron (Pandora Colin) won’t condone a child being called Earwig so she rechristens the new arrival Erica Wig. Ten years pass and Earwig (Taylor Paige Henderson) blossoms into an intrepid adventurer, who has the orphanage’s staff wrapped around her little finger, to the delight of best friend Custard (Logan Hannan).

Out of the blue, a strange-looking couple adopt Earwig and spirit the girl away to a house in a nearby town. The woman, Bella Yaga (Vanessa Marshall), confides she is a witch and needs Earwig to become an assistant in her spell-casting laboratory. “If you work really hard, I shan’t do anything to hurt you,” snarls Bella Yaga. Earwig agrees on the condition that the witch teaches her magic and the girl gradually unlocks the secrets of the house’s inhabitants: Bella Yaga’s companion Mandrake (Richard E Grant), who has demons at his beck and call, and talking black cat Thomas (Dan Stevens).

Earwig And The Witch is a crushing disappointment from an animation powerhouse with an enviable reputation for excellence. Paige Henderson’s heroine remains a headstrong brat to the bitter end and gives us no reason to care one iota about her fate. An abrupt and deeply unsatisfying ending is indicative of a slapdash approach to storytelling that doesn’t come close to Studio Ghibli’s previous rifle through the pages of Wynne Jones’s imagination with Howl’s Moving Castle.

Find Earwig And The Witch in the cinemas 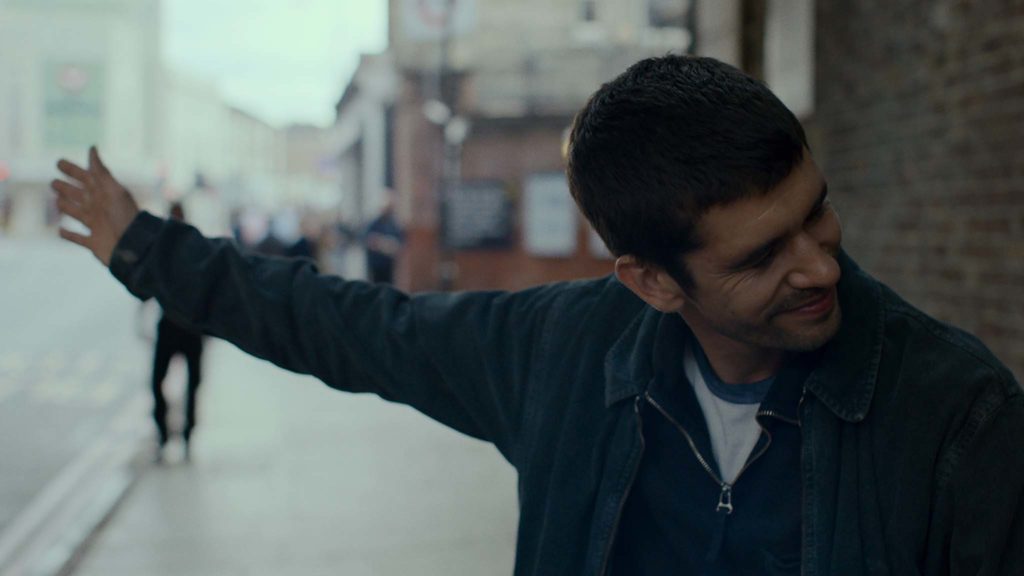 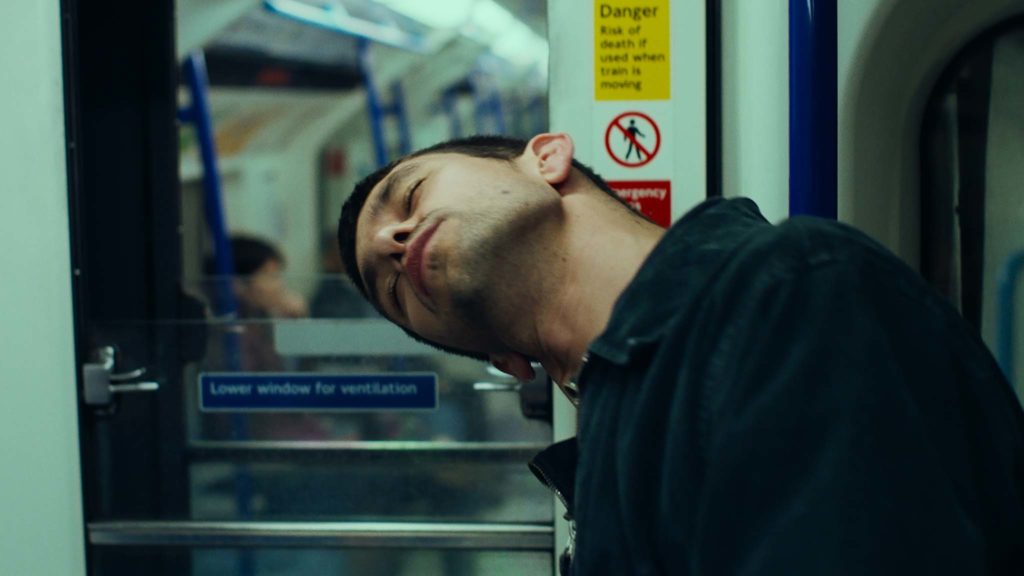 Review: A socially awkward loner loosens the hinges on his fragile mental state and spirals sickeningly out of control in the discomfiting London-set thriller Surge. Shot predominantly on whirling handheld cameras that are almost as erratic as the lead character, the feature debut of acclaimed short film director Aneil Karia is an unnervingly claustrophobic character study that takes a few liberties with realism to tighten the screws on a man at breaking point. Ben Whishaw delivers a fearless performance that lurches between upsetting, pitiful and terrifying.  His steady escalation of nervous tics, rictus grins and wild gesticulations feels horribly believable on the thronged streets of a city where few dare to make sustained eye contact with anyone in visible emotional distress.

The Bedfordshire-born actor is in every scene and seldom out of shot, veins pulsing in his neck as his unlikely criminal makes a mockery of bank security systems or gatecrashes a hotel wedding to focus that pent-up rage on a deeply disrespectful best man. Whishaw barely seems to be in control of his character’s spectacular meltdown.  It’s a shame that Rupert Jones’ and Rita Kalnejais’s script doesn’t always know how to realistically harness that manic energy for dramatic purposes.

Stansted Airport security guard Joseph (Whishaw) performs awkward pat-downs of passengers, completely detached from joke-swapping colleagues including his secret crush Lily (Jasmine Jobson). Each night, he returns home to a flat with a microwave meal and the television for company. It’s a relentless, unedifying routine, interrupted by one selfish neighbour (Perry Fitzpatrick), who insists on revving the engine of his quad bike late into the night.

During a visit to his bullying father Alan (Ian Gelder) and emotionally bruised mother (Ellie Haddington) for a belated birthday lunch, Joseph bites down on a glass of water, filling his mouth with bloody shards of glass. The burst of intense pain, puncturing the inside of his bottom lip, propels Joseph on to the crowded, cacophonous streets of London. A simple act of kindness – buying an HDMI cable costing £4.99 to allow Lily to connect her laptop to a TV – lights the fuse on Joseph’s tightly coiled fury. He orchestrates an impromptu bank robbery to pay for the cable and as the adrenaline rush crescendos, Joseph sprints breathlessly past the point of no return.

Surge is an apt description for the bursts of dizzying delirium that punctuate Karia’s ambitious debut including an unsettling altercation at an airport security gate. The threat of violence hangs over Joseph like a thick smog and Whishaw is ferociously committed to every howl of anguish or gurgle of delusional laughter as he wheels inexorably towards self-destruction. It’s never a matter of if he will snap, just when.

Find Surge in the cinemas