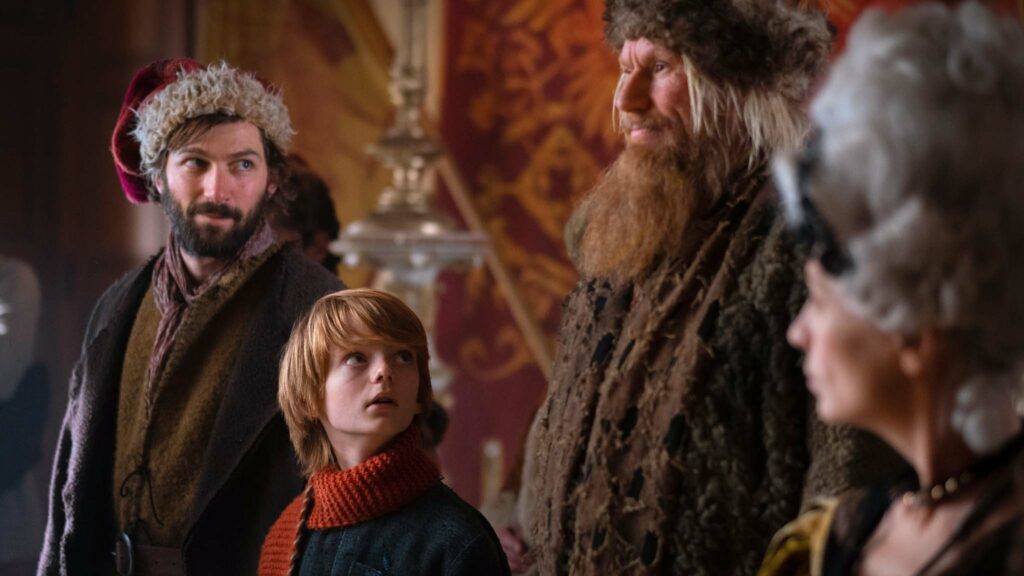 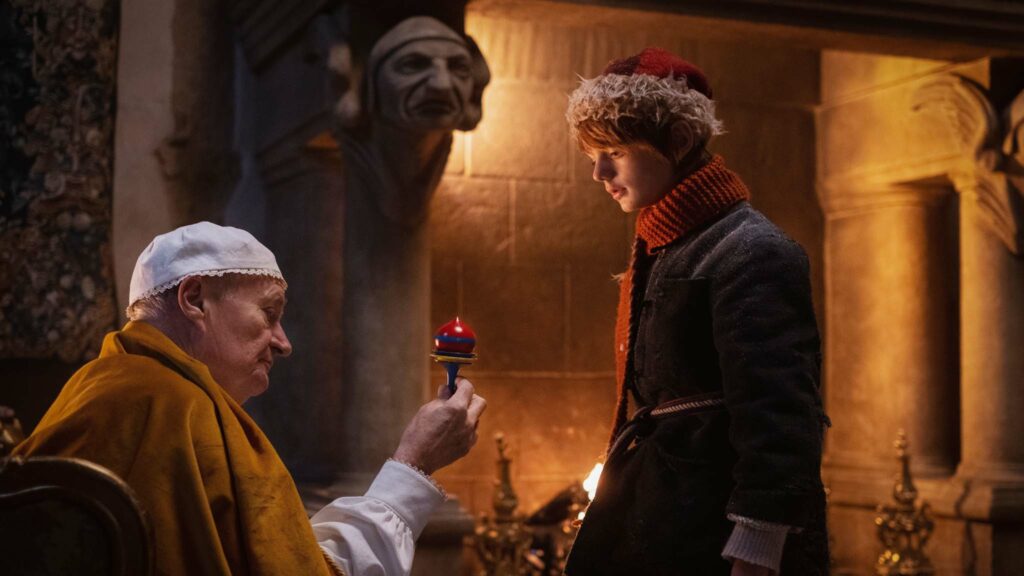 Review: Tidings of comfort and joy overflow in director Gil Kenan’s rollicking adventure adapted by the director and Ol Parker from Matt Haig’s 2015 book. Employing the same framing device as The Princess Bride – an elderly relative (Dame Maggie Smith) regales initially sceptical moppets with an outlandish story that fires their imaginations and ultimately thaws their hearts – A Boy Called Christmas posits an alternative origin story for Santa Claus and the tradition of bestowing gifts at the closing of the year.

A life lesson about how to cope with bereavement (“Grief is the price we pay for love but worth it a million times over”) is laced with sugary sentimentality and magical flights of fantasy including a talking mouse who dreams of cheese and benevolent elves blessed with wish spells. Brisk pacing keeps the audience’s bells jingling through a couple of narrative lulls but the promise of a flying reindeer and Smith pursing her lips around choice one-liners in present-day sections staves off the threat of an early frost. Rising star Henry Lawfull exudes wide-eyed innocence as the plucky teenage hero, who embarks on a journey of self-discovery after his prized possession – a doll carved from a turnip – suffers a most heinous fate.

He plays heartbroken urchin Nikolas, who lives in a forest in the middle of Finland with his woodcutter father Joel (Michiel Huisman). The hard-working parent believes that money will ease the grief of losing a wife. “Being good is better than being rich,” coos the boy. “If you’ve forgotten that, Papa, then you’ve forgotten Mama.” When the blustering king of the realm (Jim Broadbent) offers a handsome reward for proof that hope and wonder exist, Joel abandons his boy to join an expedition led by Anders the huntsman (Rune Temte) to the fabled land of elves.

Nikolas begs to join the quest but the child languishes at home in the company of cruel Aunt Carlotta (Kristen Wiig). A chance discovery of a map to Elfhelm sewn into the lining of a red hat propels Nikolas and pet mouse Miika (voiced by Stephen Merchant) on an epic odyssey. Trudging through a treacherous winter wonderland, the adventurers befriend an injured reindeer, which they christen Blitzen after the lake where Nikolas went sledging with his mother. Boy and mouse also encounter an elf elder (Toby Jones), his great-granddaughter Little Noosh (Indica Watson) and a mischievous Truth Pixie (Zoe Margaret Colletti).

A Boy Called Christmas is a wholesome and sweetly enjoyable prelude to the Yuletide festivities. Kenan and Parker’s script seesaws gently between humour and heartbreak, augmented with assured digital effects to bring colourful fairytale creatures to life such as a slobbering troll. Scares are mild, washed down with plentiful seasonal cheer.

Find A Boy Called Christmas in the cinemas 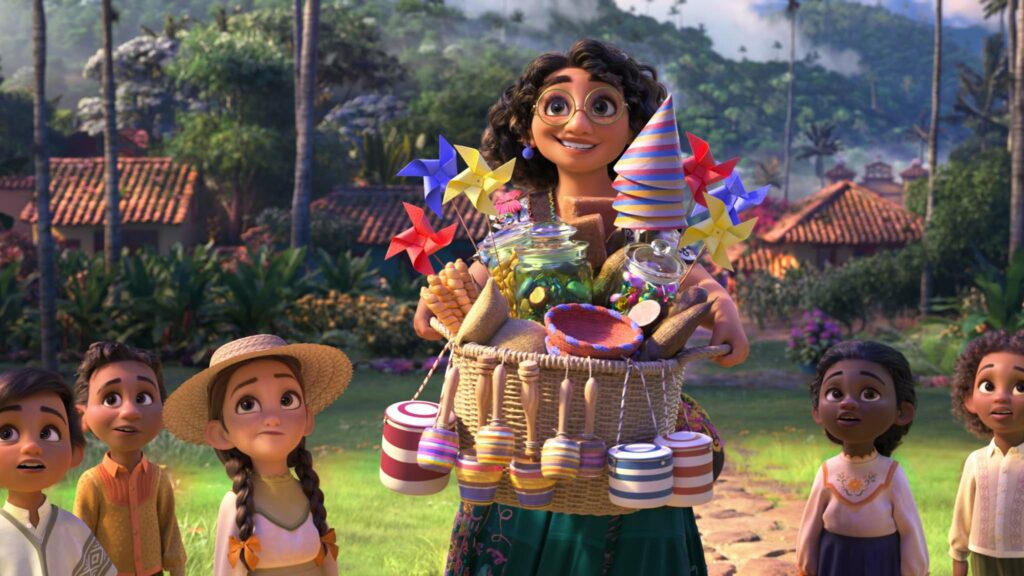 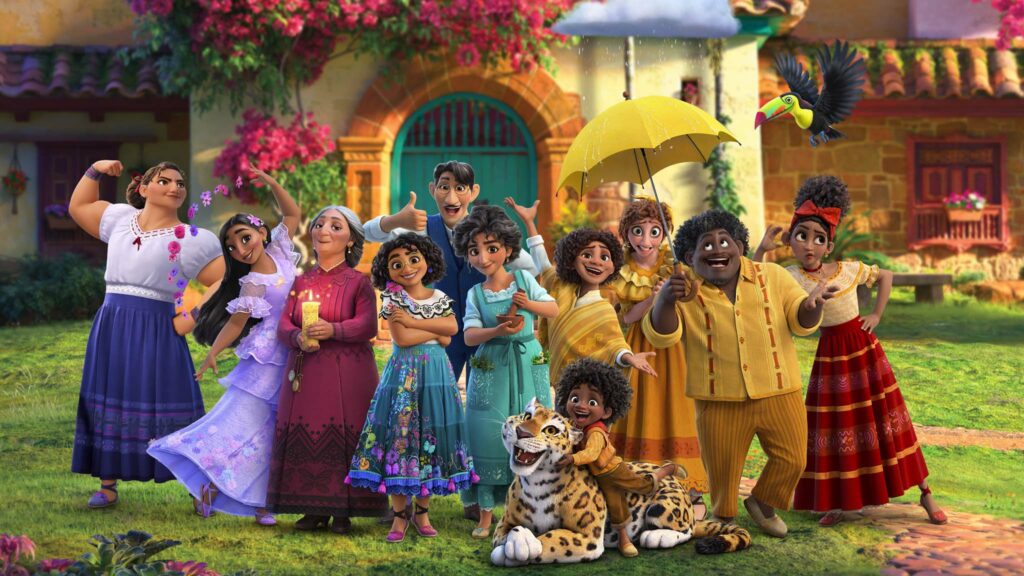 Review: Hamilton creator Lin-Manuel Miranda caps off an exceedingly busy year in front of and behind the camera (In The Heights, Vivo and Tick, Tick… BOOM!) by composing the original songs for Jared Bush, Byron Howard and Charise Castro Smith’s computer-animated musical fantasy. Surprisingly, his exuberant and lyrically ingenious songbook lacks a bona fide earworm to elevate Disney’s 60th animated adventure above his toe-tapping work on Moana or usurp husband and wife duo Robert Lopez and Kristen Anderson-Lopez’s haunting melodies on the Frozen films.

What Encanto lacks in instantly hummable tunes it compensates with the vibrant colours and traditions of Colombian culture, brought to life with impeccable artistry and cute visual flourishes including an enchanted home that communicates emotions by moving its window shutters and floor tiles. The film’s spunky heroine, Mirabel (loving voiced by Stephanie Beatrix), continues the studio’s line of spirited, independent women, who proactively change their fortunes and harness inner strength without seeking permission from a man. As one relative tenderly counsels: “You’re exactly what this family needs. You just need to see it.” During a subsequent quest for self-empowerment, heartstrings are repeatedly plucked by Bush and Castro Smith’s script and composer Germaine Franco’s musical score swells to the point of bursting.

A mountain town in Colombia is home to successive generations of the Madrigal family led by imperious matriarch Abuela Alma (Maria Cecilia Botero). She is custodian of a magical candle, lit in her darkest hour when her husband sacrificed himself to protect their kin from harm. The flickering totem bestows special powers to the Madrigals when they come of age. Abuela’s daughter Julieta (Angie Cepeda) can heal wounds with her cooking, her other daughter Pepa (Carolina Gaitan) manipulates the weather with her moods, while estranged son Bruno (John Leguizamo) can divine the future.

The only member of the household not to be blessed by the candle is Julieta’s youngest daughter Mirabel. When the family’s home comes under threat from a dark force, Mirabel steps out of the shadow of her gifted siblings – super strong Luisa (Jessica Darrow) and impossibly perfect Isabela (Diane Guererro) – to seek the key that will protect her loved ones.

Encanto is festooned with fierce yet flawed female characters and, in a timely reversal of fortunes, male counterparts are given exceedingly short shrift and often fade into the luxuriously painted background. An energetic opening musical number explaining the Madrigal family tree barely pauses for breath, establishing a sprightly tempo matched by slickly engineered action sequences. Bush, Howard and Castro Smith’s film doesn’t deviate from a path well trodden by previous Disney animations but plays to its strengths, placing family values at the heart of a story that beats defiantly in the face of adversity. 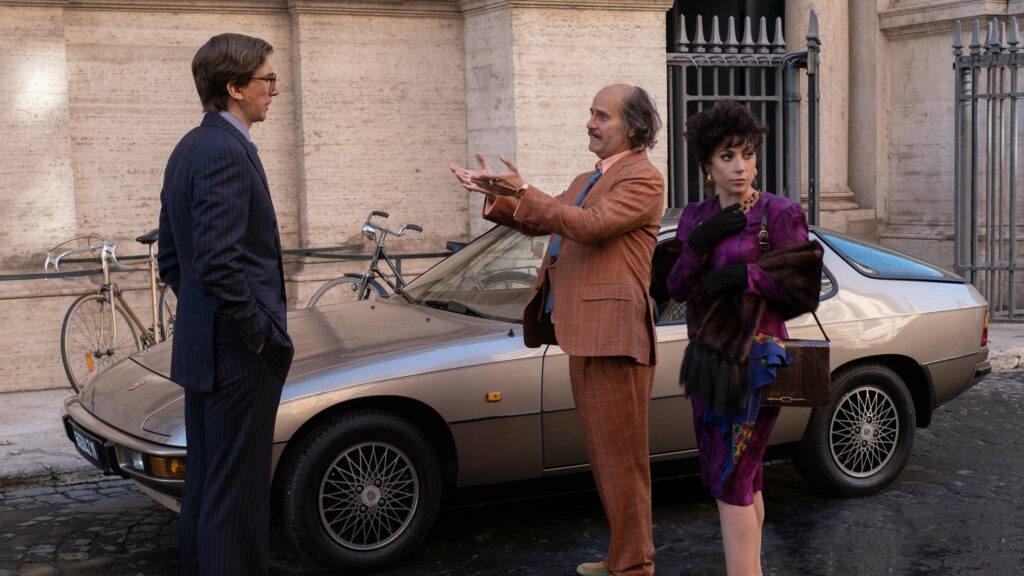 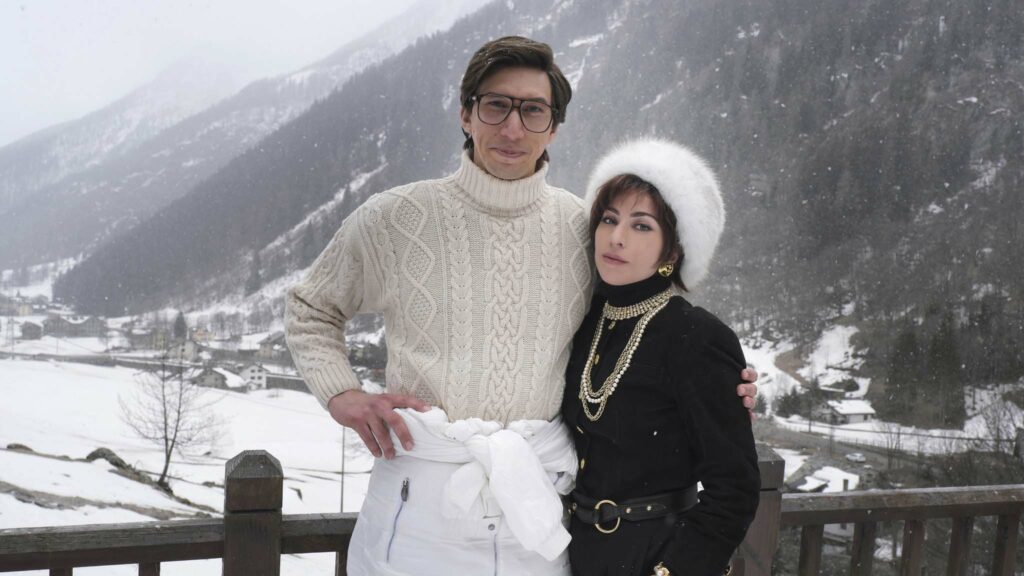 Review: In the mid-1990s, relatively unknown Texan designer Tom Ford revitalised ailing Italian fashion house Gucci with his figure-hugging outfits that left little to the imagination and seduced the eyes of influential newspaper and magazine editors. His bold, unapologetically sensual outfits were in stark contrast to the conservative brand aesthetic of the family-owned luxury brand under founder Guccio Gucci and his three sons, Aldo, Vasco and Rodolfo.

Ford’s headline-grabbing introduction to the fold is one of the titillating centrepieces of director Ridley Scott’s lavish crime drama scripted by Becky Johnston and Roberto Bentivegna from Sara Gay Forden’s book The House Of Gucci: A Sensational Story Of Murder, Madness, Glamour, And Greed. That tug-of-war between tradition and flamboyance, which wrestled Gucci back from the brink of financial ruin, epitomises the dual personalities vying for attention in Scott’s uneven but beguiling picture. Look no further than the wildly contrasting performances of Lady Gaga and Jared Leto: the former simmering quietly with ambition and murderous intent as an outsider who marries into the family, the latter maniacally mangling every vowel as a misunderstood creative genius from the Gucci bloodline, who demands he be allowed to soar “… like a pigeon!”

Patrizia Reggiani (Lady Gaga) is working at her father’s haulage firm when she meets Maurizio Gucci (Adam Driver), grandson of Guccio Gucci, at a party. Infatuation piqued by the famous surname, Patrizia stalks Maurizio and worms her way into his affections to secure a seat at the dynastic table headed by Maurizio’s disapproving father Rodolfo (Jeremy Irons) and uncle Aldo (Al Pacino). To wield greater influence, Patrizia marries Maurizio and encourages him to “take out the trash” at boardroom level so they can acquire a majority stake in the company.

Self-styled television psychic Pina (Salma Hayek) provides scheming minx Patrizia with counsel as her plan pits the couple against Maurizio’s extrovert cousin Paolo (Leto). “I’d rather see Gucci burn than hand it over to you two!” he snarls. When Maurizio publicly undermines Patrizia and flirts with old friend Paola Franchi (Camille Cottin), the vengeful wife sets in motion a murderous plan to shed the emotional baggage that is slowing her ascent of the social ladder.

House Of Gucci stomps the runway to a glorious 1990s soundtrack including a wedding choreographed to George Michael’s Faith. Lady Gaga is mesmerising as a master manipulator, who believes that “a strong family makes a strong business” as she assiduously lops off the weakest branches of her marital family tree. Leto is hysterical and scenes with Pacino are a battle of the caterwauls. Caught between tragedy and high camp, Scott’s picture is impeccably tailored to appeal to the widest possible audience without genuinely thrilling any of us.

Find House Of Gucci in the cinemas 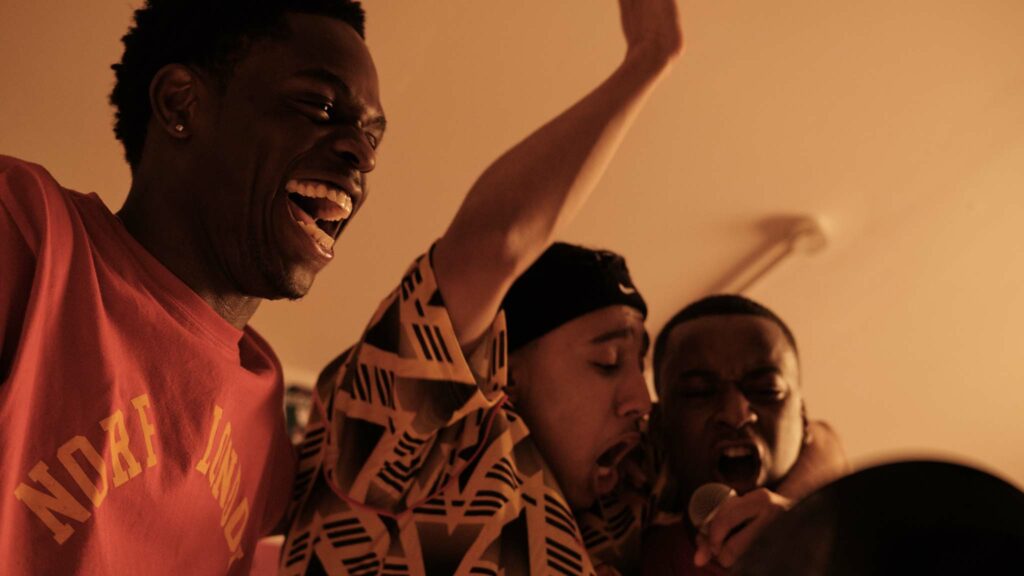 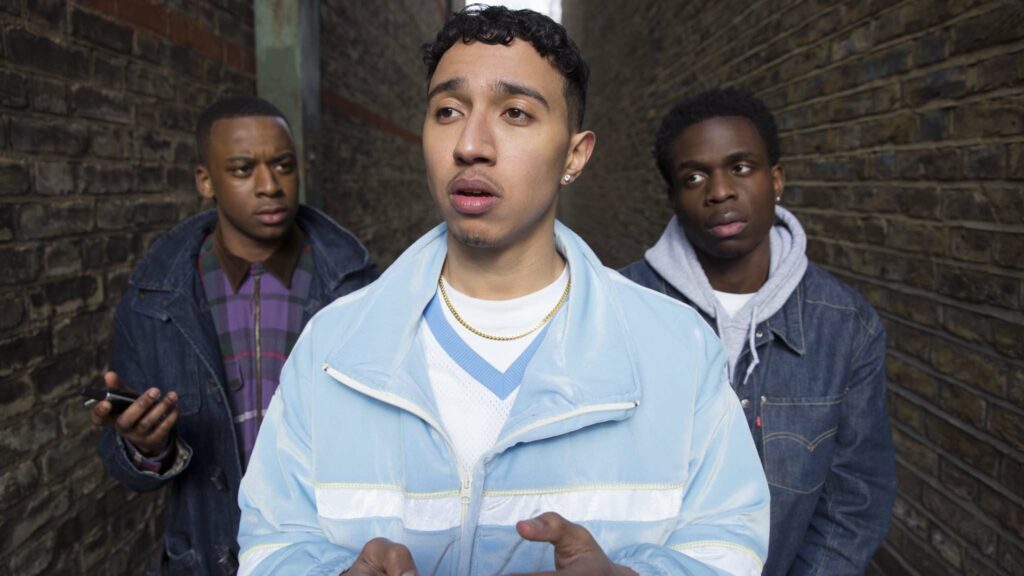 Review: Boys will be boys when they should be men in Reggie Yates’ rambunctious coming-of-age comedy set in London on New Year’s Eve 1999 during the golden years of the UK garage scene and Moschino fashion. The television presenter and radio DJ makes his feature film directorial debut with this self-penned trip down memory lane in the company of three wise-cracking best mates who are scared to acknowledge that the bonds of their brotherhood are fraying as life takes them in different directions. Yates’s script is scrappy, fast-paced and frequently amusing, using the countdown to midnight and a new millennium as a simple plot device to engineer characters’ split-second decisions that predominantly end in wince-inducing humiliation.

His three lead actors, Elliot Edusah, Jordan Peters and Reda Elazouar, are well matched, trading playful insults at dizzying speed and feeding off each other’s youthful exuberance as if they have been buddies for years. Their believable on-screen camaraderie is contained within a yellow Peugeot 205 nicknamed the “Custard Cream” for extended periods, a nostalgic production design throwback to an era of flip top phones, Backstreet Boys and the dawning of an internet powerhouse called Google.

“It’s a search thing we use at university,” casually explains 18-year-old Cappo (Edusah), who has been studying in Hull while his London-based best mates Two Tonne (Peters) and Kidda (Elazouar) excitedly promote their group The Ice Cold Crew (The ICC) on pirate radio. Cappo manages the outfit and he nervously returns home at the end of term with a well-rehearsed speech (“Boys, I’m leaving The ICC”) and a heaviness in his heart. Before he can deliver the bombshell, Two Tonne, who works as a manager at a glue factory, persuades Cappo to help him track down tickets to the Twice As Nice NYE Millennium party at the Colosseum nightclub in Vauxhall so he can impress a girl called Sophie (Kassius Nelson).

“She knows all of the lyrics to Gangsta’s Paradise. She’s one of the special ones,” discloses a clearly smitten Two Tonne. Kidda joins the madcap mission, which necessitates nightmarish encounters with Two Tonne’s embittered ex-girlfriend Kelly (Rebekah Murrell) and Princess (Shiloh Coke), who runs the local takeaway. As the clock ticks down to midnight and Y2K, the friends air grievances, shoplift cool togs and discover that mobile phone batteries run out at inopportune moments.

Pirates is an effervescent jaunt around the capital energised by lively performances and a soundtrack that swaggers from So Solid Crew, Wookie and DJ Luck & MC Neat to Simply Red and Omar. At just 79 minutes, Yates’s picture doesn’t outstay its welcome and the script hits pleasing emotion beats between the bromantic comedy.

Find Pirates in the cinemas