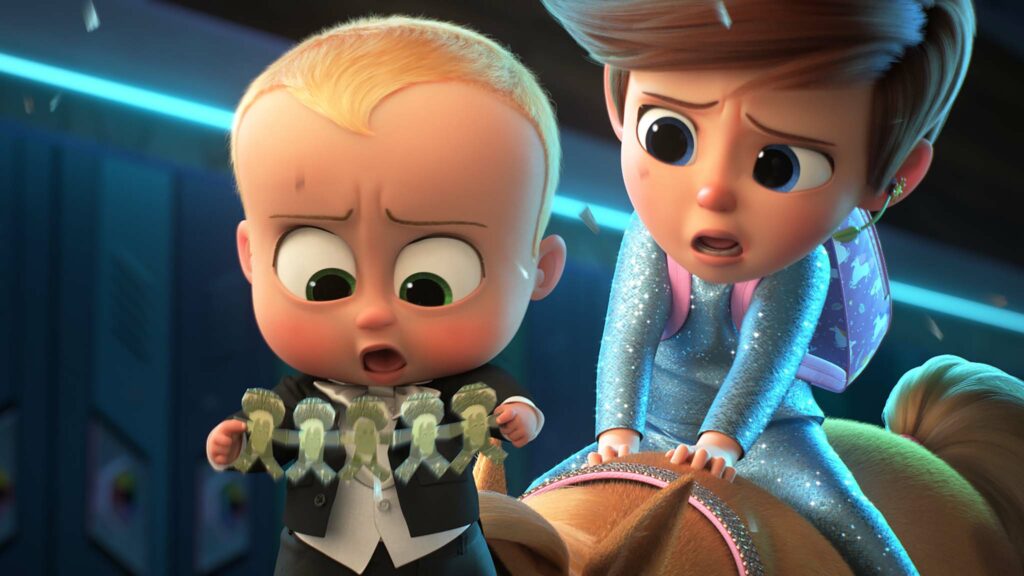 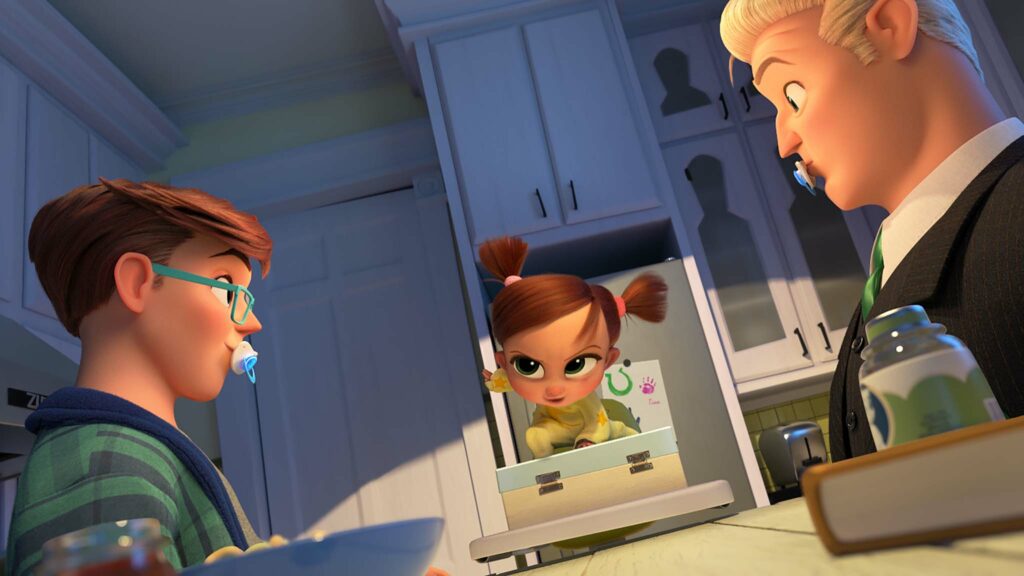 Review: Just because you grow up doesn’t mean you have to grow apart. Those inspirational words, spoken by a new Boss Baby to estranged adult siblings in Tom McGrath’s colourful but derivative sequel, perfectly sum up the wholesome and nostalgic intentions of Michael McCullers’ script for this computer-animated caper. Childhood should be cherished and venerated and once the wide-eyed curiosity and innocence of those wonder years have been tainted, the damage is irreparable.

The Boss Baby 2: Family Business introduces an experimental formula perfected by boffins at BabyCorp, which reverts cynical, world-weary adults to children for 48 hours to remind them of the joys of formative years. McGrath’s picture exploits this temporary physical regression to recycle gags from the first film, which compelled a seven-year-old boy to work with his secret agent younger brother to thwart a diabolical plot.

In the sequel, an educational maverick voiced by a disappointingly low-key Jeff Goldblum threatens the status quo. Pacing is exceedingly brisk and only slows noticeably in a chaotic final act when screenwriter McCullers gets teary-eyed rebuilding bridges between his characters to ensure peace and good will to all men and women by the end credits. Alec Baldwin’s virtuoso turn from the first film as the wise-cracking Boss Baby is dialled down for the rollicking reprise but he still enjoys the lion’s share of one-liners.

Late one night, Tim discovers Tina is also an operative from BabyCorp on a top-secret mission to gather intelligence on Dr Armstrong and his unconventional teaching methods. “If Armstrong’s philosophy keeps spreading it could be the end of childhood,” warns Tina. She provides Tim and Ted with BabyCorp’s experimental formula so they can infiltrate the Acorn Centre in the guise of a seven-year-old boy and toddler.

The Boss Baby 2: Family Business is an inoffensive intergenerational jolly, which allows Tim to befriend his daughter Tabitha in the guise of new enrolee Marcos Lightspeed and help her overcome insecurities about singing in the school’s winter pageant. Animation is crisp and vocal performances are solid if unremarkable including a lively cameo from James McGrath as Tim’s Gandalf-esque alarm clock Wizzie.

Find The Boss Baby 2: Family Business in the cinemas 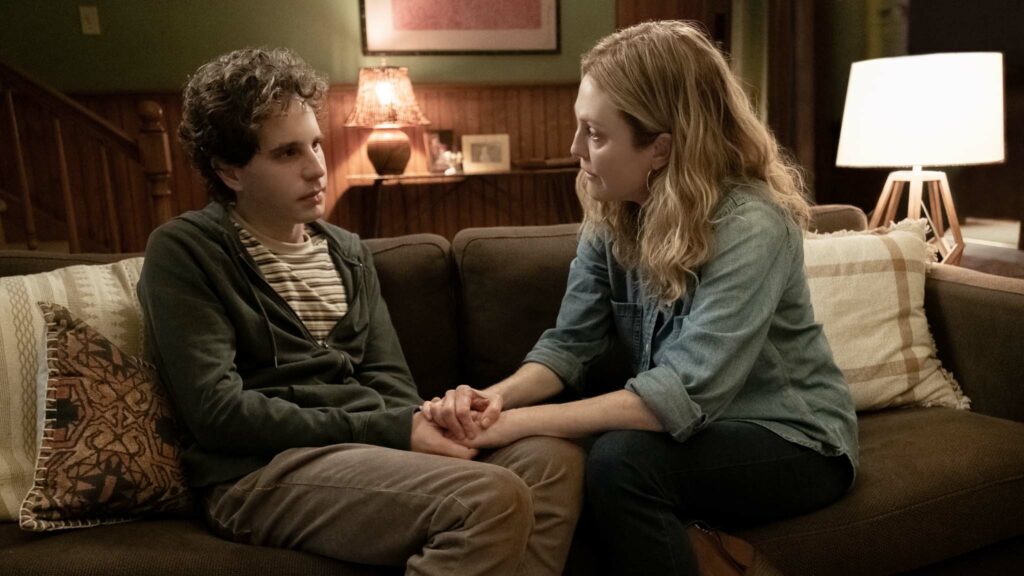 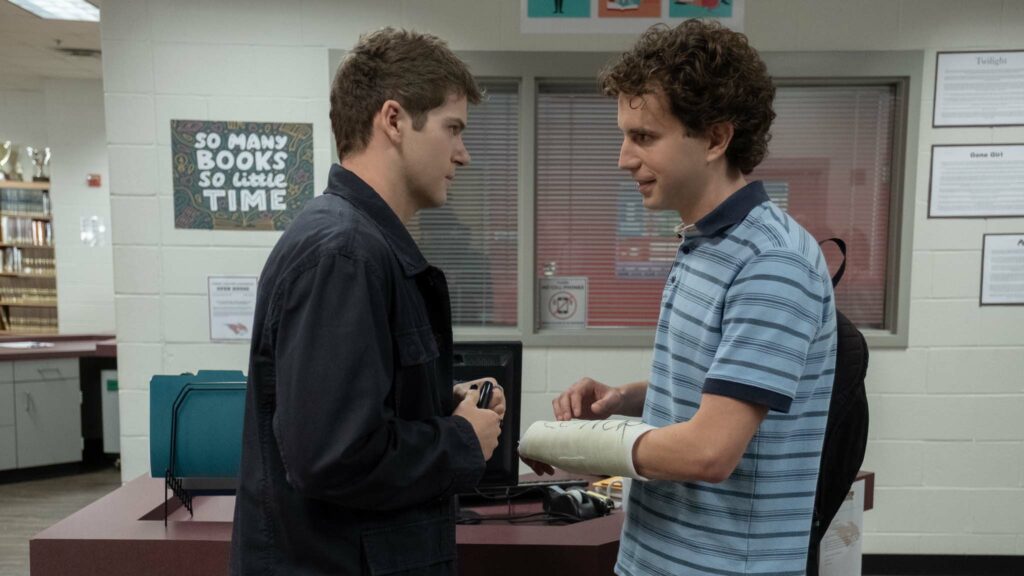 Review: If there is one artform which demands gargantuan suspensions of belief, it’s the musical. Characters casually burst into song and don’t draw attention from anyone around them as background players spontaneously perform synchronised choreography without any rehearsal. Pitch Perfect alumnus Ben Platt is unquestionably too old to reprise the title role of a teenage outcast, who becomes a focal point for a community’s grief under false pretences, in director Stephen Chbosky’s film version of the blockbuster stage musical.

However, the same suspension of disbelief which allowed John Travolta and Olivia Newton-John to spread summer lovin’ in Grease at a similar age should be granted to Platt as he powers through a rousing call to arms for greater understanding of adolescent mental health. Working from a script by Steven Levenson and the music and lyrics of Benj Pasek and Justin Paul, Academy Award-winning composers of La La Land and The Greatest Showman, Dear Evan Hansen captures some of the magic of the award-winning stage production but misses the intimacy and electrifying raw emotion of the theatre.

Aspects which work well at a distance in an auditorium, like Evan’s physical tics, feel overdone when viewed in close-up and a reworked denouement softens the lead character too much. The songbook soars on screen, particularly Waving Through A Window and the barnstorming anthem You Will Be Found, and two new compositions, The Anonymous Ones and A Little Closer, exert gentle tugs on heartstrings.

Socially-awkward high school student Evan Hansen (Platt) has been advised by his therapist to write letters to himself to boost self-confidence and reduce the frequency of crippling anxiety attacks, which require a daily regimen of pills overseen by his hardworking single mother, Heidi (Julianne Moore). Classmate Connor Murphy (Colton Ryan) steals one of these missives from a printer shortly before he takes his own life and Connor’s distraught mother Cynthia (Amy Adams) and stepfather Larry (Danny Pino) find the letter folded in their boy’s pocket.

They mistakenly deduce that Connor wrote the letter to “his best, most dearest friend” Evan. The Murphys take comfort from the thought that outcast Connor had at least one friend and Evan refuses to shatter their illusions, setting in motion a chain of events which propels him into the spotlight and endears him to Connor’s sister Zoe (Kaitlyn Dever). When class president Alana Beck (Stenberg) galvanises support for a memorial service, the uncomfortable truth about Evan’s deception threatens to come to light.

Dear Evan Hansen diminishes in power on the big screen but still packs a flurry of emotional punches when it counts. Platt strains sinews to put himself through the wringer and comes across far creepier in his intentions than on stage, while Moore makes the most of her apologetic solo So Big/So Small. Chbosky’s film reclines, sometimes awkwardly, between those two extremes. 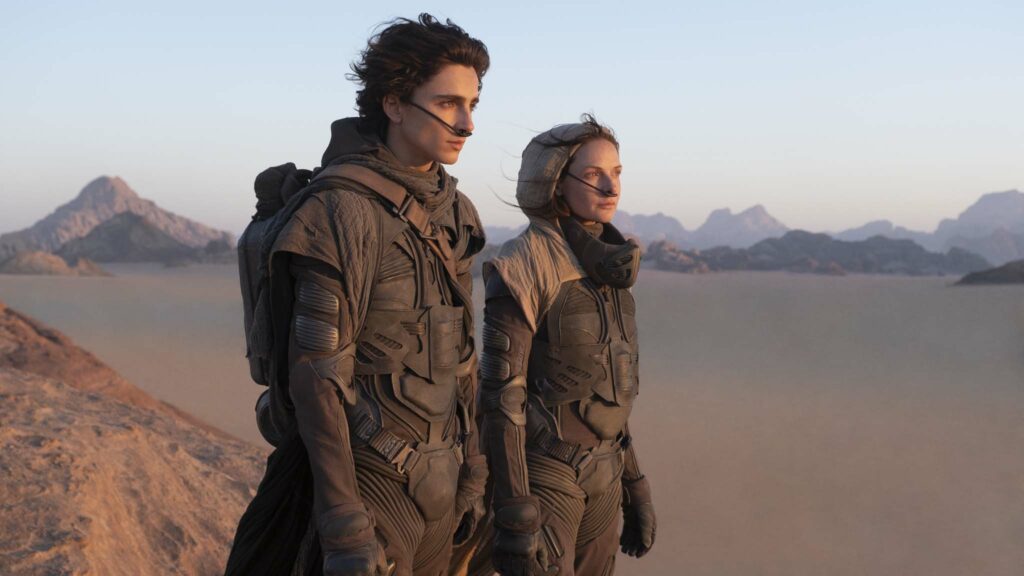 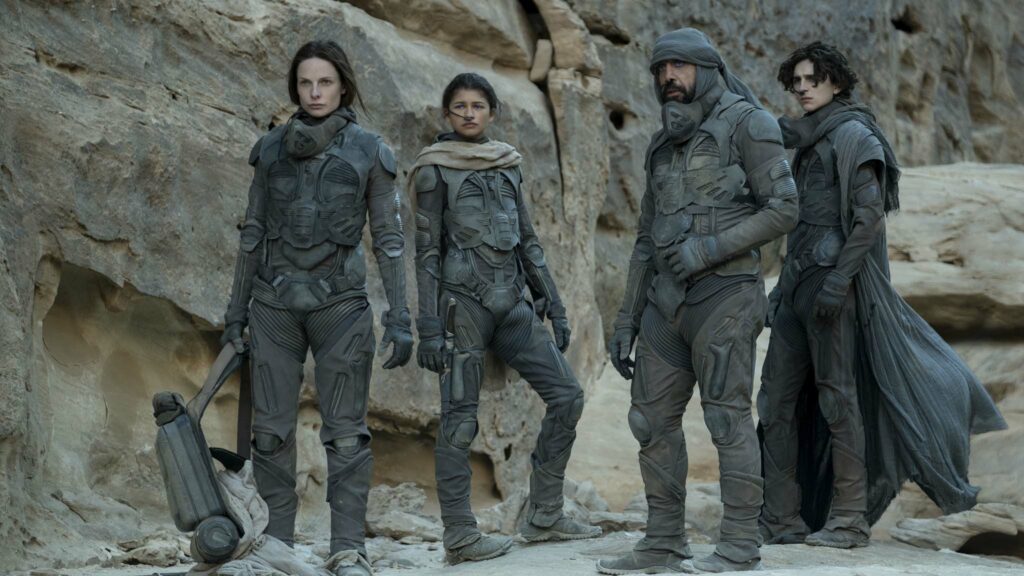 Review: Think big. French Canadian director Denis Villeneuve certainly does with his visually breath-taking adaptation of Frank Herbert’s supposedly ‘unfilmable’ tome documenting the fall and rise of House Atreides in the year 10191. Dune – or more accurately Dune Part One – is a bountiful feast for the senses, combining live action and impeccable digital effects to realise vast new worlds where dragonfly-like aircraft with fluttering wings swoop over undulating sandscapes to monitor the golden bow waves created by the approach of a giant worm. A night-time battle sequence in the air and on the ground is orchestrated with brio, delivering a true spectacle that demands the biggest screen and an immersive sound system cranked up to full volume to capture every thunderous chord and clatter of composer Hans Zimmer’s orchestral score.

Unlike David Lynch’s ill-fated 1984 film version, which attempted to distil Herbert’s entire novel, Villeneuve’s script co-written by Jon Spaihts and Eric Roth retains narrative clarity by only addressing the first half of the book. “This is only the beginning…” coos Zendaya’s desert warrior to co-star Timothee Chalamet after two-and-a-half bombastic hours of warmongering, intrigue and betrayal. Let us pray Dune mines sufficient takings at the box office to turn her promise into reality.

Duke Leto Atreides (Oscar Isaac) receives a proclamation from the Emperor to assume control of harvesting Spice on the desert planet Arrakis from sworn rivals House Harkonnen led by corpulent Baron Vladimir Harkonnen (Stellan Skarsgard). “The most valuable mineral in the universe” is integral to interstellar travel but mining the precious orange dust in sufficient quantities to appease the Emperor is fraught with peril.

Dune invests significant time in fleshing out morally flawed characters and their tangled relationships before the blood-letting begins. By design, the picture lacks a dramatic resolution but this opening chapter is well constructed and anchored by the fiery mother-son dynamic of Ferguson and Chalamet. The running time does feel excessive. Villeneuve and his team are determined to showcase every penny of a reported £120 million budget with lavish production design, ceremonial costumes and futuristic military attire, and at least one nail-biting set-piece devoted to the film’s biggest stars: the hulking sandworms. In their case, big is beautiful. 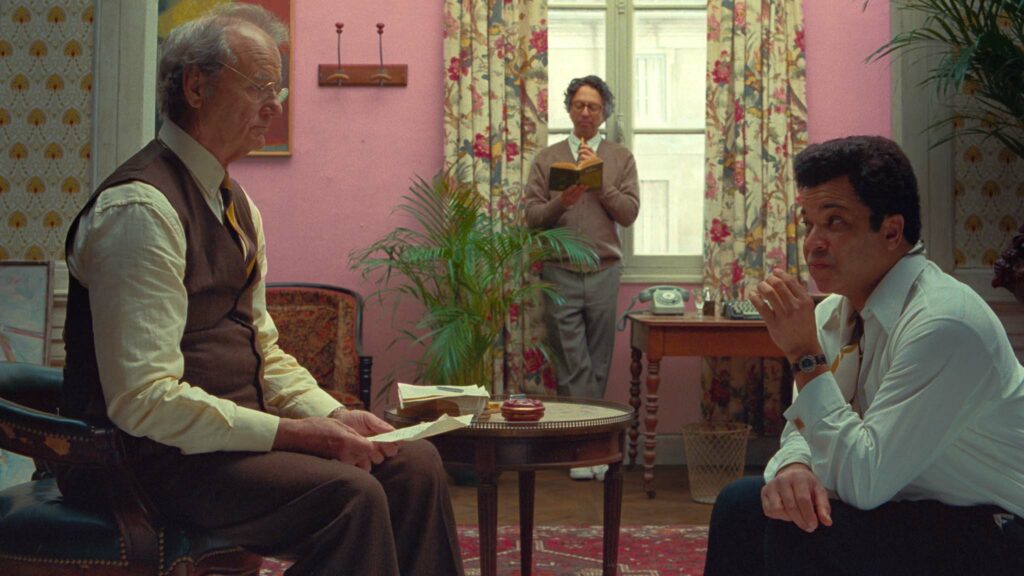 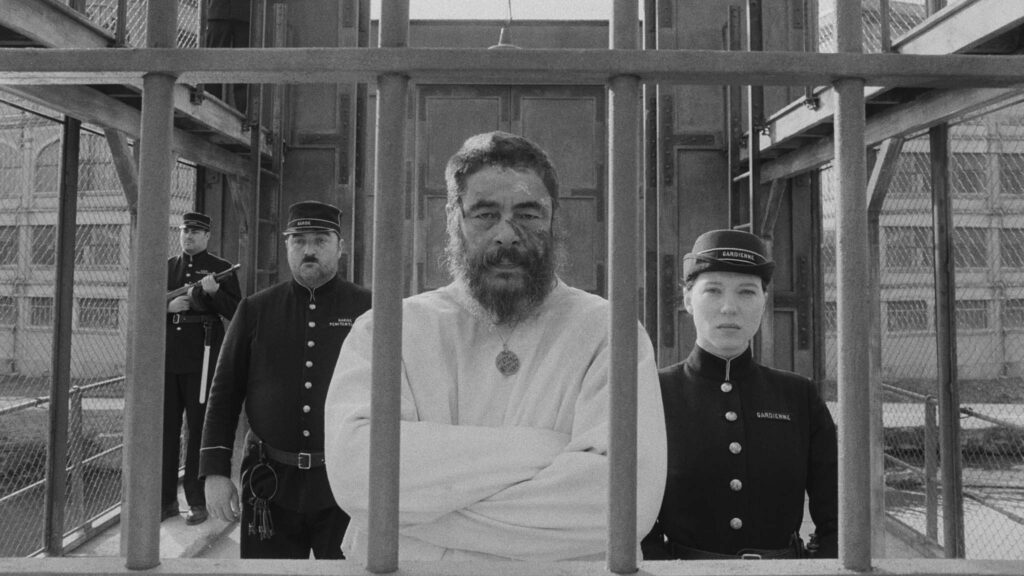 Review: Writer-director Wes Anderson lassos an all-star cast including Adrien Brody, Timothee Chalamet, Benicio del Toro, Frances McDormand, Bill Murray, Lea Seydoux, Tilda Swinton and Jeffrey Wright for a quixotic comedy of errors set in the offices of the titular magazine. A lustrous valentine to journalism and the power of the written word, The French Dispatch is blessed with the filmmaker’s signature visual style and some dazzling flourishes like a car chase during a kidnapping, which unfolds at breakneck speed in animation rather than live action.

The script is structured as three vignettes penned by different contributors: The Concrete Masterpiece by art critic JKL Berensen (Swinton), Revisions To A Manifesto by Lucinda Krementz (McDormand) and The Private Dining Room – Of The Police Commissioner by food critic Roebuck Wright (Wright). This intentionally disjointed form of storytelling lacks the emotional resonance and offbeat running jokes of Anderson’s finest confections, The Grand Budapest Hotel, The Royal Tenenbaums and Moonrise Kingdom, but there is still much to savour in each offbeat chapter.

A candy-coloured framing device introduces us to Arthur Howitzer Jr (Murray), editor of The French Dispatch, a supplement of the Liberty Kansas Evening Sun written by American ex-pats based in the fictional French town of Ennui-sur-Blase where the scent of revolution hangs in the air. Howitzer is a man of few but meaningful words. “Just make it sound like you wrote it that way on purpose,” he tells one contributor. When he dies, the staff including beret-wearing travel writer Herbsaint Sazerac (Owen Wilson), cartoonist Hermes Jones (Jason Schwartzman) and copy editor Alumna (Elisabeth Moss) reminisce on the high-brow publication’s golden years and prepare words of wisdom for a final edition.

Berensen documents the efforts of art dealer Julien Cadazio (Brody) to acquire a painting by convict Moses Rosenthaler (del Toro) of his muse, prison guard Simone (Seydoux). Krementz relays her personal involvement in a student uprising led by Zeffirelli (Chalamet) and his girlfriend Juliette (Lyna Khoudri) akin to the 1968 riots which sent shockwaves through Paris. Finally, Wright serves up the tall tale of Lieutenant Nescafier (Stephen Park), a pioneer of the gastronomic art of police cooking, who witnesses the abduction of the son of the commissaire (Mathieu Amalric).

The French Dispatch feels like an amuse-bouche compared to the meaty main courses of Anderson’s previous work but the writer-director still tickles our palette with an assortment of complementary flavours. Sweet romance is undercut by bitter regret and laced with wry humour. The filmmaker’s devilish wit is in the smallest details of his on-screen designs including judicious use of split screens to construct a detailed history of the town that Howitzer and his team call home. Bon voyage.

Find The French Dispatch in the cinemas