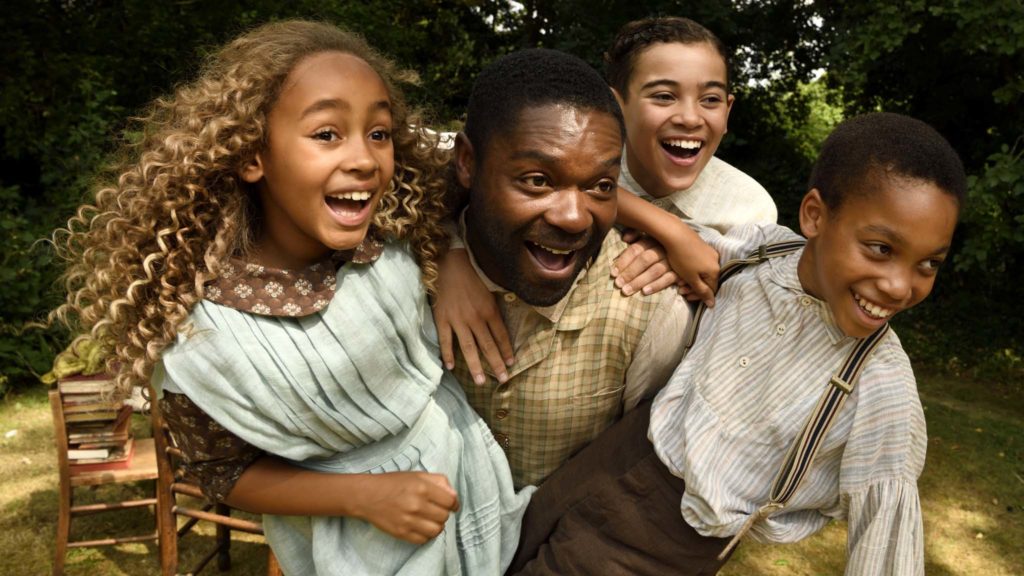 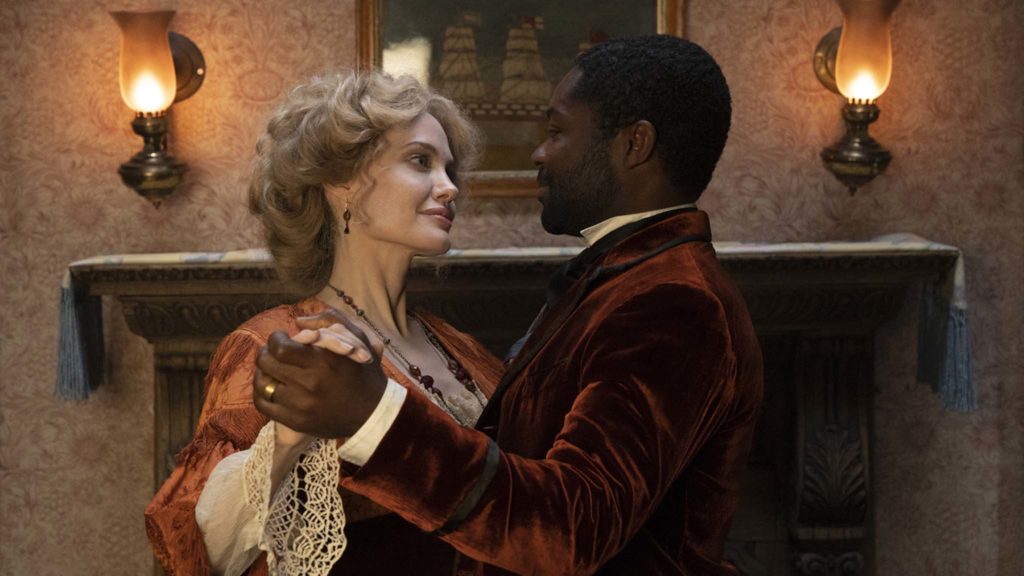 Review: Don’t let life drag you down. Just keep floating above it. Those poetic and fanciful words of wisdom, imparted by a father to his son in the aftermath of tragedy, are fitfully heeded by director Brenda Chapman and screenwriter Marissa Kate Goodhill in this fantastical coming-of-age story, which melds elements of Alice’s Adventures In Wonderland and Peter And Wendy. Characters and imagery from Lewis Carroll and JM Barrie’s novels, published almost 50 years apart, soften narrative blows of bereavement, abandonment and abuse which are woven into a tonally uneven script that imagines a sibling bond between the children who inspired the books.

In Come Away, Peter and Alice are the adorable products of progressive 19th-century parents David Oyelowo and Angelina Jolie, who advocate children running wild in fields and conjuring the imaginary worlds of Neverland and Wonderland. Totems from the literary classics are scattered liberally throughout a freewheeling plot: a chirruping pawnbroker (Clarke Peters) who is as mad as a hatter, a mother’s gift of a tiny silver bell made by the local tinker, an older brother poised to leave for school telling his sister, “I’ll leave my shadow behind”.

Miniature model ship craftsman Jack Littleton (Oyelowo) and his wife Rose (Jolie) live in the countryside on the outskirts of London with their three children, David (Reece Yates), Peter (Jordan A Nash) and Alice (Keira Chansa). It’s a bucolic idyll replete with a bustling housemaid (Jenny Galloway), where the siblings’ imaginations are fuelled by stories of fairies and high seas adventure recounted by the wide-eyed parents.

A soothing air of childhood innocence blows icy cold when David drowns by accident in a lake. Rose seeks refuge in alcohol, denying her remaining offspring the attention and bedtime stories they crave, while Jack struggles with a gambling addiction that racked up crippling debts to his brother James (David Gyasi). Peter (Jordan A Nash) blames himself for the tragedy and vows to improve his academic grades. Meanwhile, wealthy aunt Eleanor (Anna Chancellor) offers to cure the family’s financial woes by raising Alice under her own roof so the girl might lose some of the disgusting “habits of the lower class” like biting her nails.

Recounted in flashback by adult Alice (Gugu Mbatha-Raw), Come Away struggles to find a pleasing balance between reality and fantasy. The script’s tug of war pulls hardest for the former. Oyelowo and Jolie catalyse lukewarm screen chemistry so when the Littleton clan fractures under the weight of grief, our emotional tethers to the characters quickly come loose. Younger actors are well cast and tread a fine line between winsome and wounded as their pint-sized adventurers reject the transition to adulthood, when heads are filled “with neck ties… and taxidermies.” Curiouser and curiouser.

Find Come Away in the cinemas 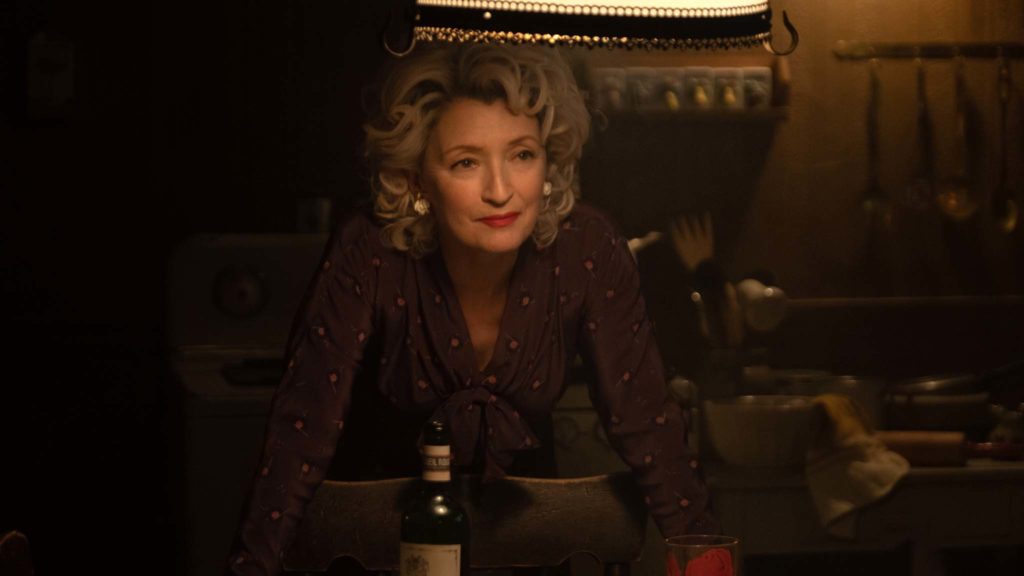 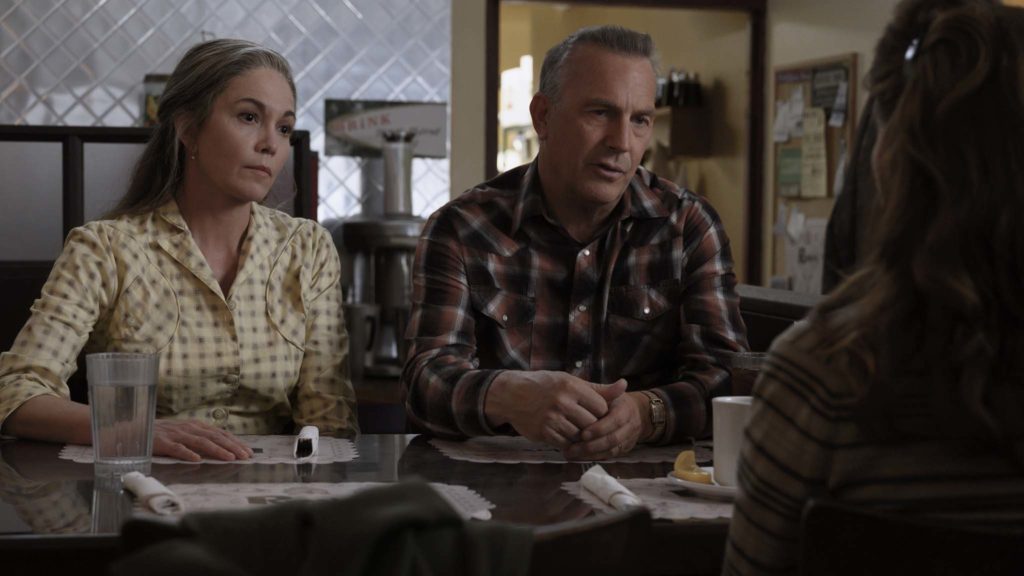 Review: Blood is thicker than water and both spill far too easily in writer-director Thomas Bezucha’s slow-burning thriller of strained familial ties, torn from the pages of a novel by Larry Watson. Anchored by impassioned performances from Diane Lane and Lesley Manville as strong-willed matriarchs who are fiercely divided about custody of a grandchild, Let Him Go canters down a familiar path, steadily ratcheting up tension until the only conceivable resolution is snarling threats and violence. When base desires override rational thought, they are neatly contained in an explosive final act.

Barbarity and retribution are the least satisfying elements of the film’s meandering narrative. Lane adds layers of corrosive grief and indignation to her proud homemaker, who cannot bear to lose her grandson three years after burying her only child. “I’m hoping to give her that, let her say goodbye,” her husband – played with stoic resolve by Kevin Costner – confides to a kindly police officer. Manville’s cigarette-puffing harpy is a chip off the same block as Jacki Weaver’s protective mother bear in Animal Kingdom. She keeps her kin close and manipulates them to do her bidding, which could include the introduction of a sharpened blade to fleshy digits.

Retired sheriff George Blackledge (Costner) and his horse trainer wife Margaret (Lane) live on a ranch in 1960s Montana with their 25-year-old son James (Ryan Bruce), his wife Lorna (Kayli Carter) and their grandson Jimmy (Bram and Otto Hornung). A freak horse-riding accident forces the Blackledges to bury their boy and they watch helplessly as Lorna eventually marries another man, Donnie Weboy (Will Brittain), who communicates with his fists. Without warning, Donnie spirits Lorna and three-year-old Jimmy away to his family home in Gladstone, North Dakota.

Margaret is bereft. She was denied a chance to say goodbye to James and she refuses to be separated from her cherished only grandson. The grandmother packs up her worldly belongings and issues husband George with an ultimatum about little Jimmy: “I won’t be coming back here without him”. Consequently, the Blackledges embark on a cross-country odyssey to prise their grandson out of Donnie’s clutches. The hastily conceived mission puts the couple on a collision course with hot-headed Weboy matriarch Blanche (Manville) and her other sons, Bill (Jeffrey Donovan), Marvin (Adam Stafford) and Elton (Connor Mackay).

Let Him Go is distinguished by quietly compelling performances from Lane, Manville and Costner, who enrich their characters beyond the pages of Bezucha’s script. Graphic violence is used sparingly for shocking dramatic effect and fully warrants the film’s 15 certificate. A saggy middle section introduces a Native American outcast (Booboo Stewart) to even the numbers a little for a climactic showdown with only one logical and emotionally satisfying outcome. Yes, there will be blood.

Find Let Him Go in the cinemas 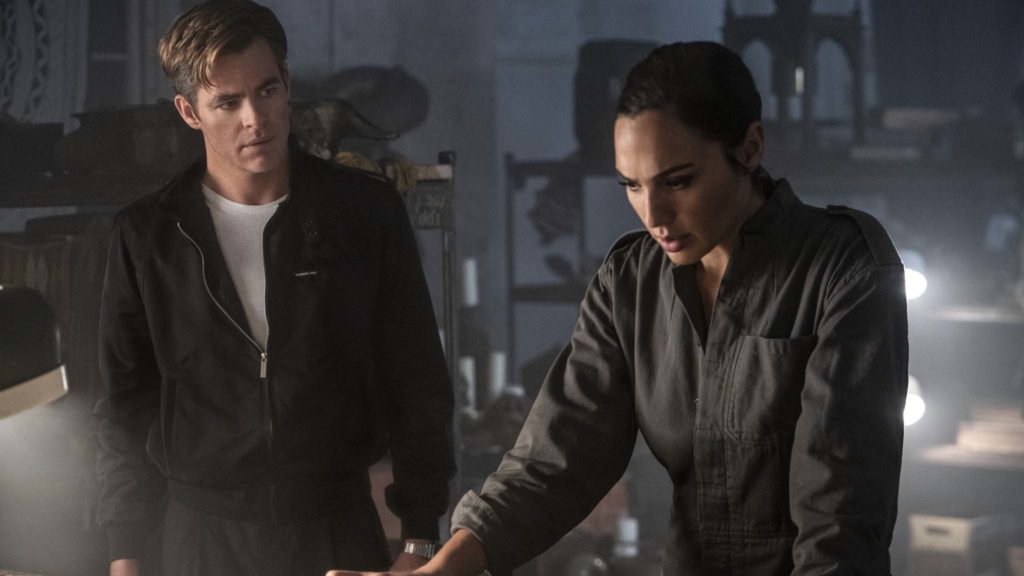 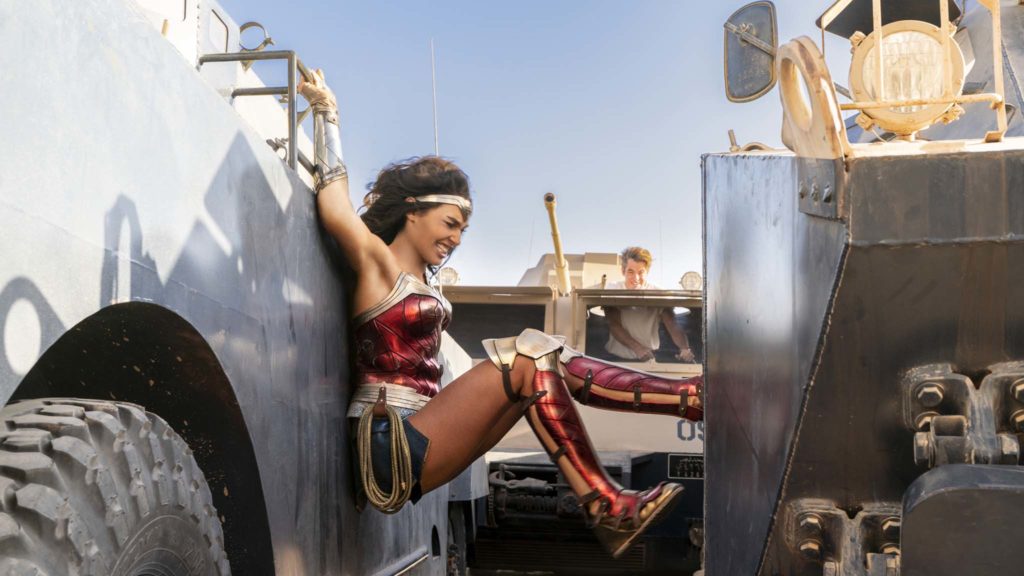 Review: In 2015, when principal photography began on the first Wonder Woman, if you had asked director Patty Jenkins to make a wish, it’s unlikely she would have entertained the possibility that her action-packed blockbuster might become the highest grossing film of all time helmed solely by a woman. Sometimes, fanciful dreams do come true. With worldwide box office takings in excess of 820 million US dollars for the superpowered origin story, it’s no surprise that the Amazonian princess is brandishing her lasso of truth in a turbo-charged sequel.

Wish-fulfilment is at the heart of Wonder Woman 1984, a muscular and occasionally thrilling cautionary tale set during the Cold War when tensions remain high between the United States and the Soviet Union. Production designer Aline Bonetto and costume designer Lindy Hemming plunder a nostalgia goldmine of outdated technology and questionable style choices when the punk scene was enjoying a second wave and breakdancing was head-spinning into mainstream pop culture.

Jenkins’ script, co-written by Geoff Johns and Dave Callaham, explicitly references WW Jacob’s 1902 short story The Monkey’s Paw to explore the grim price of asking for your heart’s desire. The fantastical conceit grants filmmakers’ wishes to reunite the core cast of the original film and shatter broken hearts into tiny shards a second time. Action set pieces are staged with brio with minimal digital effects, which allows cameras to closely shadow Gal Gadot as she somersaults over and beneath a moving military convoy. A gravity-defying showdown, which required actors to spend months training on wires with performers from Cirque du Soleil, is a whirling, breathtaking spectacle. The organic, ‘blood, sweat and tears’ approach to key sequences is a refreshing antidote to CGI overload, which frequently proves the downfall of comic book romps.

Diana Prince (Gadot) now works as an archaeology expert in the halls of the Smithsonian Institution. She has found her calling as mankind’s secret protector, although she is still haunted by the loss of American pilot Steve Trevor (Chris Pine) during the battle with Ares at the end of the First World War. Elsewhere in Washington DC, Maxwell Lord (Pedro Pascal), CEO of Black Gold Cooperative – “The oil company run by the people for the people” – discovers a way to grant wishes. His Machiavellian scheme pits Diana against her bookish friend, gemologist Barbara Ann Minerva (Kristen Wiig).

Wonder Woman 1984 opens with a terrific throwback to Diana’s childhood on the island of Themyscira with her mother (Connie Nielsen) and aunt (Robin Wright). Gadot plumbs her character’s grief and solitude in between dazzling acrobatics, while Wiig transitions from broad comedy to jealousy and self-loathing as her apex predator villain manifests. Pascal’s chief antagonist feels dramatically underpowered even with the addition of an emotionally manipulative subplot involving a young son. Composer Hans Zimmer replaces Rupert Gregson-Williams from the first film with a bombastic, propulsive score to match the dizzying on-screen carnage. Fans will be hoping Jenkins’ sequel matches the original for vertiginous thrills and spills. Wish granted.