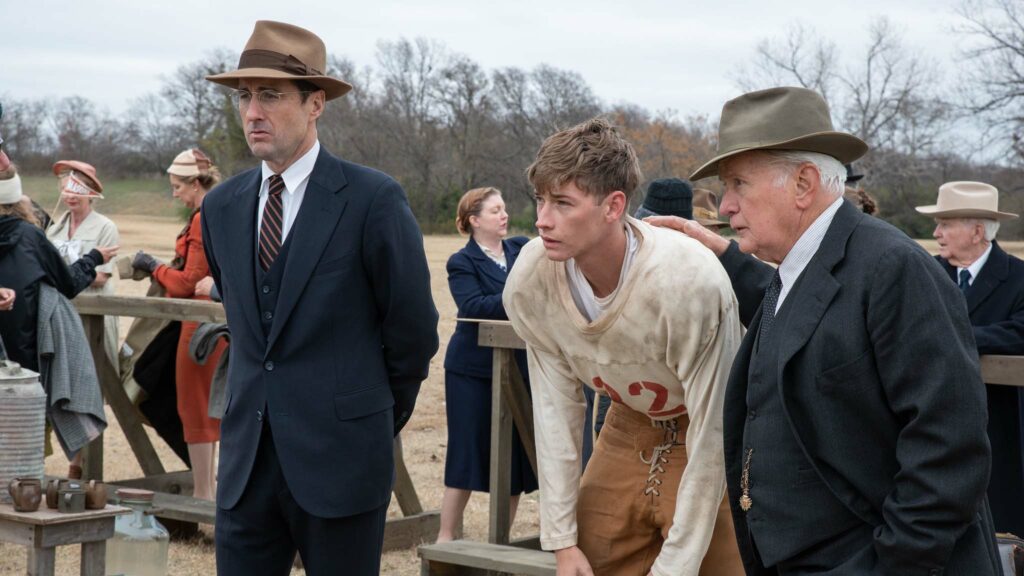 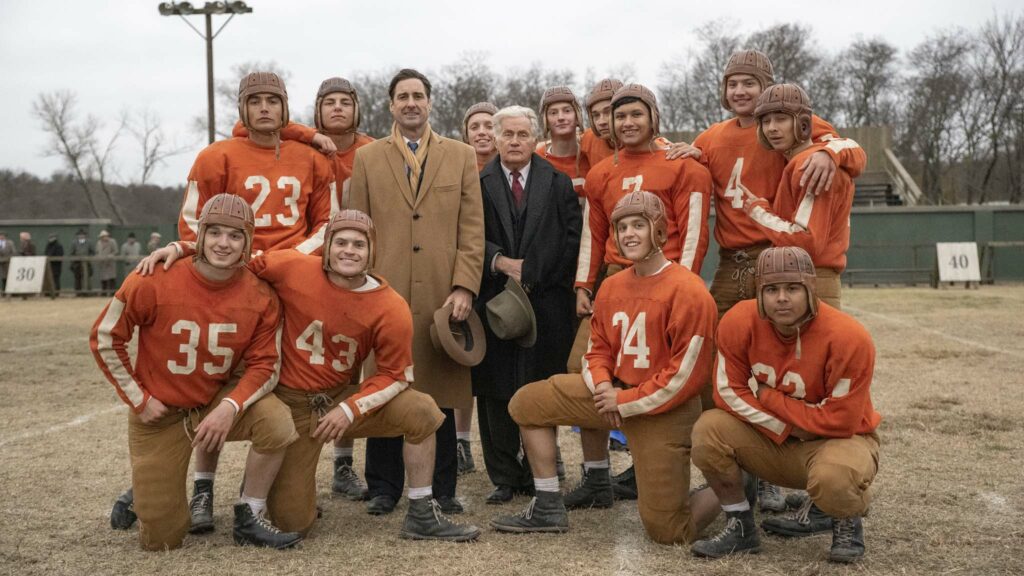 Review: From its opening title card (“This story was inspired by true events”) and Martin Sheen’s prosaic narration of black and white footage of the Great Depression, 12 Mighty Orphans slavishly abides by the conventions of an underdog sports drama. Director Ty Roberts’ film huddles with Jim Dent’s best-selling book to celebrate the achievements of disadvantaged boys from Texas, who overcame Dickensian mistreatment, deep-rooted abandonment issues and self-doubt to sow seeds of hope across the nation.

It’s wholesome, old-fashioned fare, which mythologises the Mighty Mites as they were known during a period of great hardship, when children without parents were treated as second-class citizens. The script, co-written by Roberts, Lane Garrison and Kevin Meyer, passes the ball between hastily written characters, giving us little sense of who the orphans were before inspirational teacher Rusty Russell rewrites the rulebook with his spread offence formation, relying on the speed of his weakling players to overcome stronger opponents.

There is a satisfying predictability to each narrative play, including a throwaway subplot involving a sadistic teacher, who exploits the boys as labour for a printing press to line his pockets. Luke Wilson chews lightly on his football coach’s stirring speeches about brotherhood under fire as composer Mark Orton ladles on the syrup.

In the aftermath of the Great Depression, war hero Rusty Russell (Wilson) transplants his wife Juanita (Vinessa Shaw) and two young daughters from Temple in Texas to the dustbowl of Fort Worth. Husband and wife take teaching positions at The Masonic Home and School for around 150 orphans run by Frank Wynn (Wayne Knight), an unsympathetic brute who “keeps the hooligans at bay” with a wooden paddle nicknamed Bertha. While Juanita concentrates on moulding girls into ladies, Rusty inspires the boys in the classroom and then heads outside to assemble a ragtag American football team with one punctured ball on a patch of arid soil.

“You can either work the field or play the field,” Rusty tells his charges including grief-stricken new arrival Hardy (Jake Austin Walker), who was found by police at the scene of his father’s suicide by shotgun. The boys gradually bend to Rusty’s will, with encouragement from avuncular school medic Doc Hall (Sheen). The newly-formed Mighty Mites capture the public’s attention, sparking a fierce rivalry with Polytechnic High School coached by Luther Scarborough (Lane Garrison), who rudely dismisses the outsiders’ chance of success: “Orphan footballers? That’s as dumb as letting women vote!”

12 Mighty Orphans builds slowly to the obligatory championship showdown where life lessons are tested and a rallying cry in the dressing room transforms terrified boys into resilient men. With the greatest amount of screen time, Walker stands out from a line-up of fresh faces as the film’s most valuable player.

Find 12 Mighty Orphans in the cinemas

Everybody's Talking About Jamie (12A) 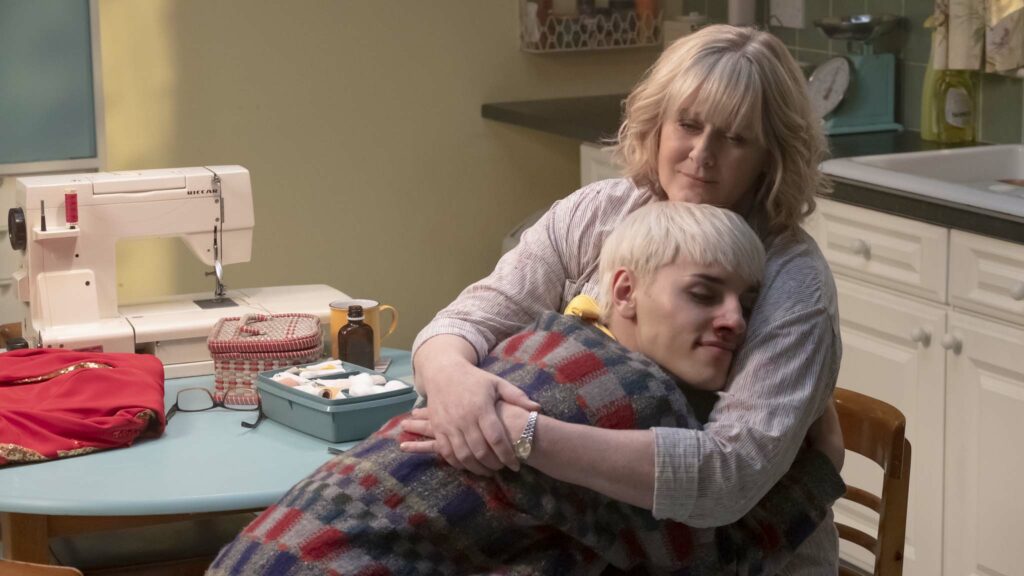 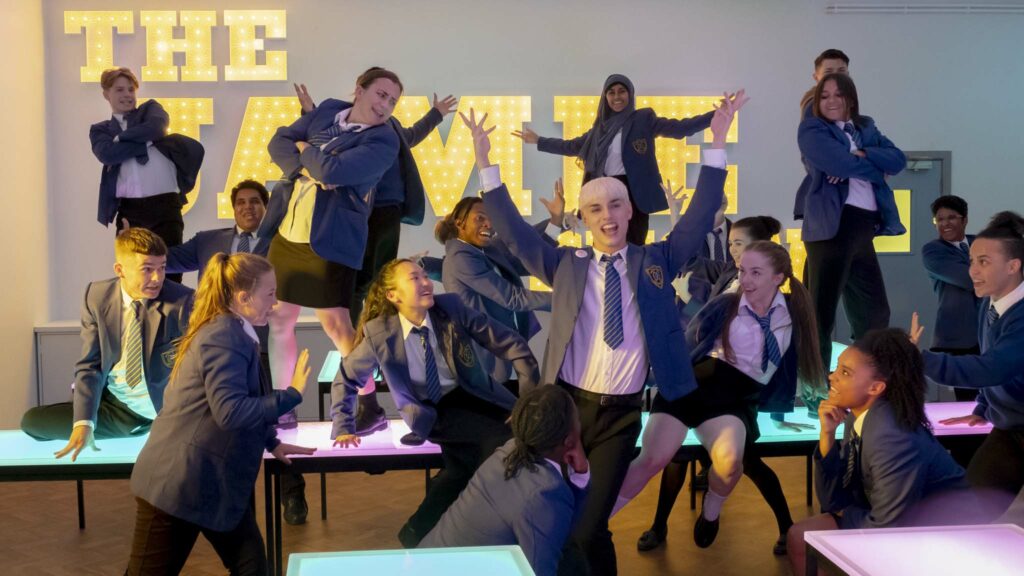 Review: Life’s a drag, in the best possible sense, in Everybody’s Talking About Jamie, a defiantly feel-fabulous film version of the award-winning coming-of-age musical written by Tom MacRae with music courtesy of Dan Gillespie Sells from The Feeling. Theatre director Jonathan Butterell makes his feature film debut with a faithful stage-to-screen adaptation, expanding the rousing song and dance numbers beyond the classrooms and hallways of a secondary school in Sheffield to follow the out and proud 16-year-old hero as he chases a dream of attending the end-of-year prom as his authentic self, in heels and a dress.

Jenny Popplewell’s celebrated 2011 TV documentary Jamie: Drag Queen At 16 provides the heart-tugging narrative framework (footage of the real Jamie and his mother festoons the end credits) which MacRae’s script dazzles with energetically choreographed dream sequences and wrenching ballads from the heart. “This story really happened… then we added the singing and dancing,” cheekily declares the film with its opening breath.

The stage version’s stand-out songs resonate loud and clear in widescreen including The Wall In My Head, Don’t Even Know It and He’s My Boy, a heartfelt ballad about a mother’s unconditional love for her son, which Sarah Lancashire delivers with tears welling in her eyes. A new song, This Was Me, initiated by a scene-stealing Richard E Grant as drag queen Loco Chanelle but performed largely by Holly Johnson, lead singer of Frankie Goes To Hollywood, is a deeply moving memento mori to beautiful creatures lost to the Aids crisis.

Careers adviser Miss Hedge (Sharon Horgan) laments Jamie’s life goal of performing on stage. Unfazed, the teenager recruits Hugo Battersby (Grant) aka drag doyenne Loco Chanelle as his mentor to step confidently into the spotlight. Jamie’s rise to stilettoed greatness is hampered by self-doubt and shame, sown by the boy’s estranged homophobic father (Ralph Ineson), who cruelly confesses: “I wanted a son so badly, and I got you.”

Powered to the hilt by Harwood’s effervescent lead performance, Everybody’s Talking About Jamie is almost two hours of unabashed pure joy, which preaches acceptance and self-love with the same sequinned fury as The Adventures Of Priscilla, Queen Of The Desert and Kinky Boots. Like its stage counterpart, there are dramatic lulls before Jamie’s big reveal as Mimi Me but Butterell understands how to get toes tapping and he turns up the volume on the youthful exuberance. People will be talking, glowingly, about his Jamie.

Find Everybody's Talking About Jamie in the cinemas 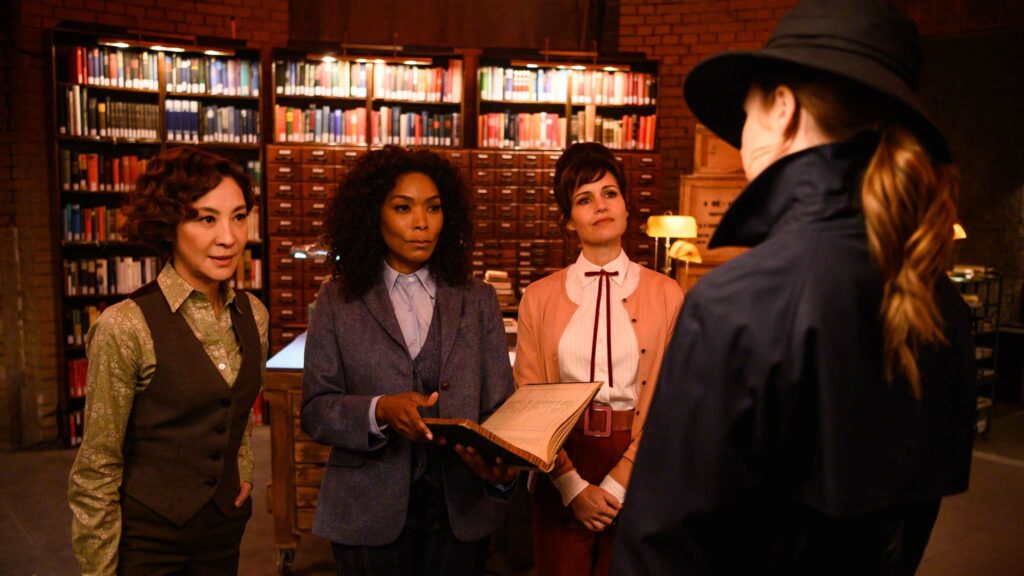 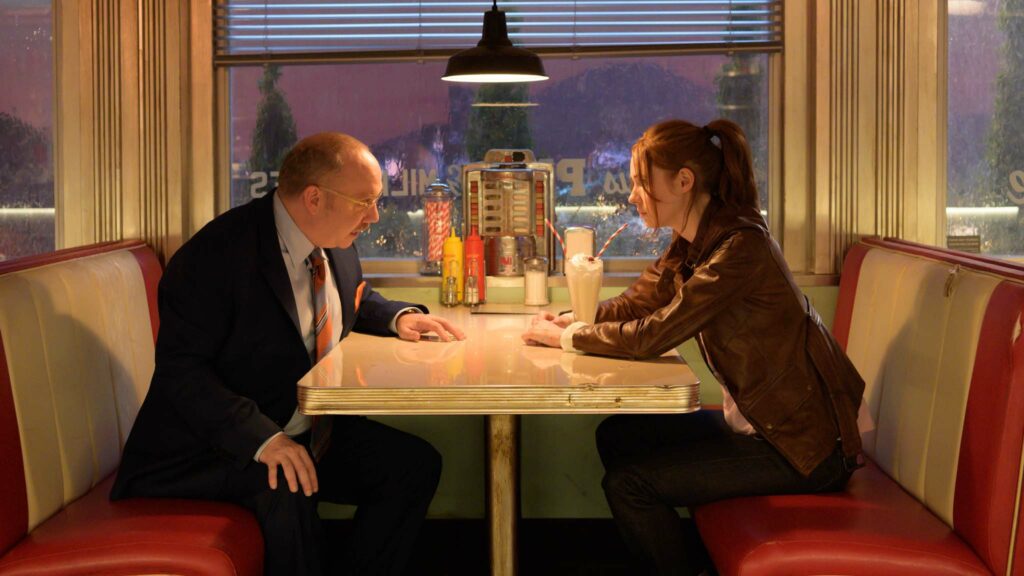 Review: Director Navot Papushado’s outlandish caper choreographs one of its most giddily elaborate fight sequences in a cavernous library to the distinctive raspy growl of Janis Joplin. “I’m gonna show you baby, that a woman can be tough,” echoes between wooden book cases as Karen Gillan, Lena Headey, Angela Bassett, Michelle Yeoh and Carla Gugino disable a small army of gun-toting goons using claw hammers, metal chains, knife pistols, a tomahawk and gold ingot. As Piece Of My Heart foretells, the film’s resourceful harpies are as cold as ice when it comes to killing anything with a Y chromosome, preferably in slow motion.

Unfortunately, the conflicted characters are less skilled at taking a piece of our hearts with their undernourished back stories and a fractious mother-daughter dynamic that scrimps on a satisfying payoff. Co-written by Papushado and Ehud Lavski, Gunpowder Milkshake is an explosive and fitfully entertaining melee that puts John Wick, Kill Bill and Kingsman: The Secret Service in a blender and garnishes the comic book-violent set-pieces with neon-lit stylistic flourishes. Production design goes into overdrive with a retro diner serving frothy milkshakes and a bowling alley bathed in pink and blue, a visual nod to a bruising battle of the sexes that plays out over almost two hours with the odds stacked heavily in favour of women.

Fifteen years after Scarlet (Headey), an assassin for a shadowy syndicate called The Firm, leaves town in a hurry, her daughter Sam (Gillan) takes up the murderous mantle under guardian and mentor Nathan (Paul Giamatti). He despatches Scarlet to terminate “an accountant for the clean side of the business” but she inadvertently murders the son of crime lord Jim McAlester (Ralph Ineson) then wilfully disobeys orders to use The Firm’s cash as ransom money for the dead accountant’s eight-year-old daughter, Emily (Chloe Coleman).

Nathan has no choice but to issue a kill order against Scarlet. “It’s business and you landed on the wrong side of the balance sheet,” he sombrely informs her. Allies become sworn enemies and Scarlet seeks sanctuary with three librarians – Anna May (Bassett), Florence (Yeoh) and Madeleine (Gugino) – who hide weapons in handsomely handbound copies of Jane Austen, Charlotte Bronte and Virginia Woolf.

Gunpowder Milkshake vaunts style over substance, anchored by an unsympathetic lead performance from Gillan. Suspensions of disbelief are commonplace. After less than two minutes of driving instruction, Emily steers like a pro during a fast and furious chase through a multi-storey car park and when Scarlet’s arms are temporarily paralysed by nefarious injection, she tapes a blade to one hand, a gun to the other, and uses centrifugal force to inflict damage on three hapless henchmen. Body counts are high (one head is neatly severed on a forklift truck’s metal prong) but emotionally satisfying thrills are in shorter supply.

Find Gunpowder Milkshake in the cinemas