The Broken Hearts Gallery (12A) 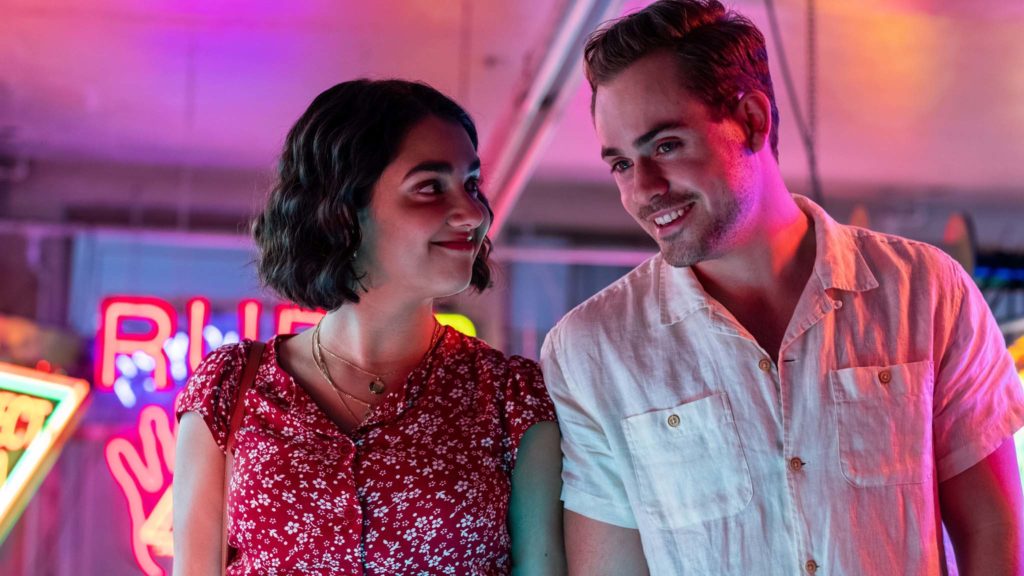 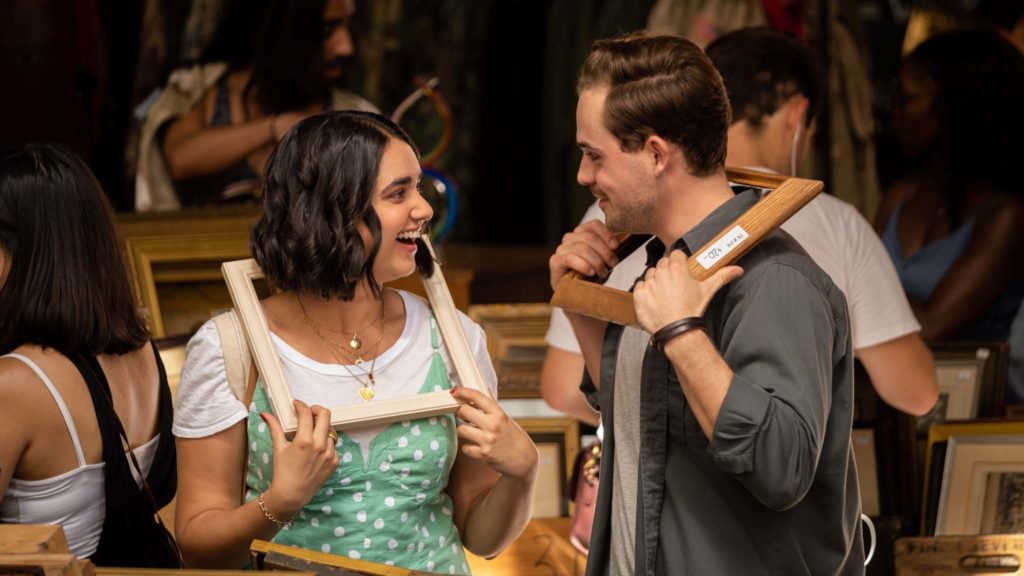 Review: Pain is inevitable. It’s what you do with it that matters. Those words, spoken by Tony Award-winning Broadway star Bernadette Peters in a scene-stealing role as a gallery owner, are the guiding light of writer-director Natalie Krinsky’s exuberant romantic comedy, which fizzes sweetly like a mouth full of rainbow dust. Anchored by winning lead performances from Geraldine Viswanathan and Dacre Montgomery, The Broken Hearts Gallery proves that a little of what you want is exactly what you need by polishing well-thumbed genre tropes to a lustre.

Krinsky’s script is laden with whip-smart dialogue and cracking one-liners (“You’re the hero in your love story and the villain in mine”) that sing when delivered at speed by an ensemble cast, who genuinely look like they are having a blast in every joy-infused frame. A booze-soaked karaoke scene has the pleasingly chaotic feel of actors letting off steam after work courtesy of Sir Elton John and Kiki Dee. The winning combination of Viswanathan and Montgomery as love-scarred singletons, brought together through a meet cute in the back of a car, is matched by eye-catching supporting performances from Molly Gordon and Phillipa Soo as sassy roommates. Soo earns bountiful laughs by stealth as a lesbian ladykiller who has perfected the art of the public break-up and jokes that she may be poisoned by Vladimir Putin if she continues to bed and discard Russian supermodels at her current rate.

Twenty-something gallery assistant Lucy (Viswanathan) is an emotional hoarder who collects mementos from relationships and scatters them around her room, which resembles a mausoleum to failed love. “I live in a cave of souvenirs like the Little Mermaid,” she argues, romanticising her obsession to despairing gal pals Amanda (Gordon) and Nadine (Soo). A tie belonging to Lucy’s boyfriend Max (Utkarsh Ambudkar) becomes the latest addition when he breaks up with her because they are “in different places”.

Adding insult to injury, Lucy also loses her job at the Woolf Gallery managed by New York art doyenne Eva (Peters), who famously “discovered Cindy Sherman in a laundromat”. A chance encounter with Nick (Montgomery), who has been self-financing the construction of a boutique hotel in the shell of an old YMCA, encourages Lucy to create a pop-up exhibition entitled The Broken Hearts Gallery. Fellow New Yorkers arrive with bizarre keepsakes, expanding the collection to hundreds of trinkets. With an increasingly smitten Nick at her side, Lucy salves emotional wounds and becomes a cause celebre of the city’s vibrant art scene.

The Broken Hearts Gallery is naughty but nice in the best sense, striking a delightful balance between potty-mouthed banter and emotional vulnerability. A subplot connected to the board game Monopoly plucks heartstrings, teeing up a grand gesture that we know is coming from the moment Viswanathan and Montgomery lock twinkling eyes.

Find The Broken Hearts Gallery in the cinemas 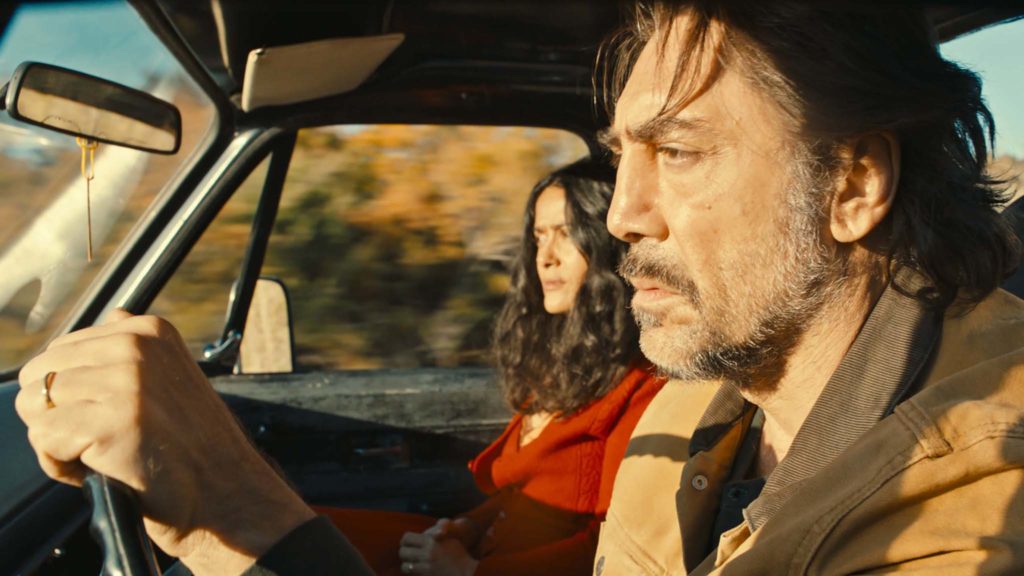 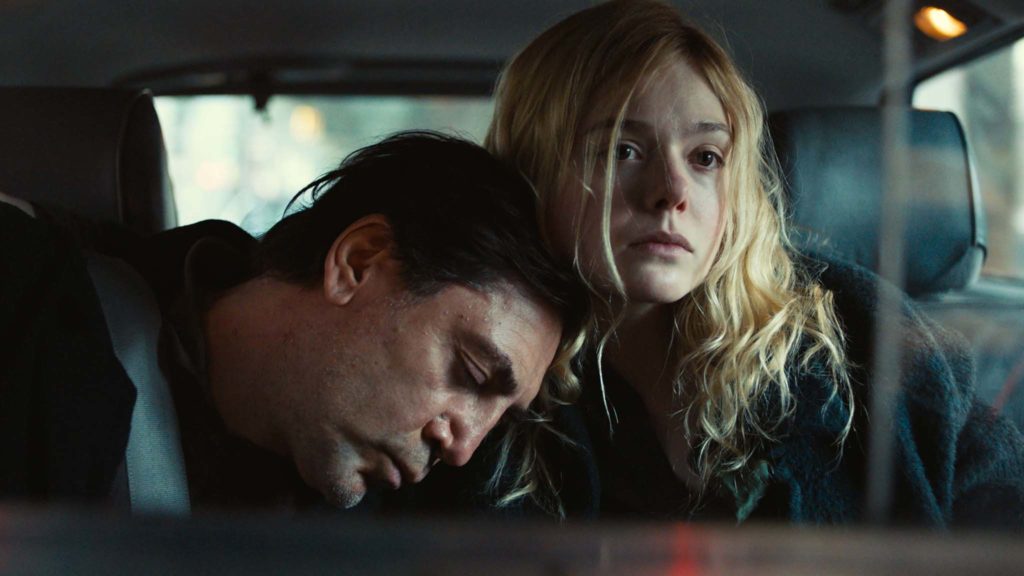 Review: Dementia is a cruel, heartless thief. It robs victims of their sense of identity and dignity while simultaneously stealing precious final moments from family and friends, who stare into the eyes of the people they love and are met with confusion and abject fear rather than warmth and recognition. London-born filmmaker Sally Potter OBE has a deep personal connection to the syndrome. She nursed her younger brother Nic, a musician and composer who was a bass guitarist for rock group Van der Graaf Generator, when he displayed early onset dementia until his death from pneumonia in 2013 aged 61.

The filmmaker’s experience drip-feeds into the eddying emotions of The Roads Not Taken, an intentionally disorienting drama about the relationship between a daughter and her scholarly father, who is slowly being consumed by the choking fog of dementia. Curiously, writer-director Potter keeps us perpetually at arm’s lengths from the characters and their anguish, offering us fragmented glimpses at a sun-bathed past and colour-bleached present that fail to coalesce into a richly detailed study of a broken family at tipping point. Potter’s most personal film may be her most frustratingly impersonal in its artful execution.

Molly (Elle Fanning) races across New York City in a taxi to spend the day with her father Leo (Javier Bardem) and shepherd him to appointments with a dentist and an optician. The middle-aged patriarch is trapped for extended periods inside the prison of his mind and fails to answer the door to his nurse Xenia (Branka Katic). When Molly finally gains access to the cramped apartment, which is located beside elevated subway train tracks, she remains a stranger to dishevelled and discombobulated Leo.

With considerable patience and effort, Molly and Leo make both appointments and an unwelcome trip to the ER, where acid-tongued ex-wife Rita (Laura Linney) makes a brief appearance. “Why does everyone refer to Dad as ‘he’, as if he’s not here?” despairs Molly. “Well is he?” coldly responds Rita, compelling her crestfallen daughter to contemplate the harsh reality of the situation. Meanwhile, Leo leafs through pages of his memory scrapbook, recalling emotionally bruising times with his first love Dolores (Salma Hayek) and a chance encounter with a pretty tourist called Anni (Milena Tscharntke).

The Roads Not Taken shuffles between polished slivers of Leo’s past and present without any profound sense of purpose. Fanning and Bardem are mesmerising, including one beautifully crafted interlude in a bathroom that mines soothing humour from distress. Potter stubbornly refuses to take the well-trodden path to our hearts, preferring a more circuitous route that only leads to frustration on and off screen.

Find The Roads Not Taken in the cinemas 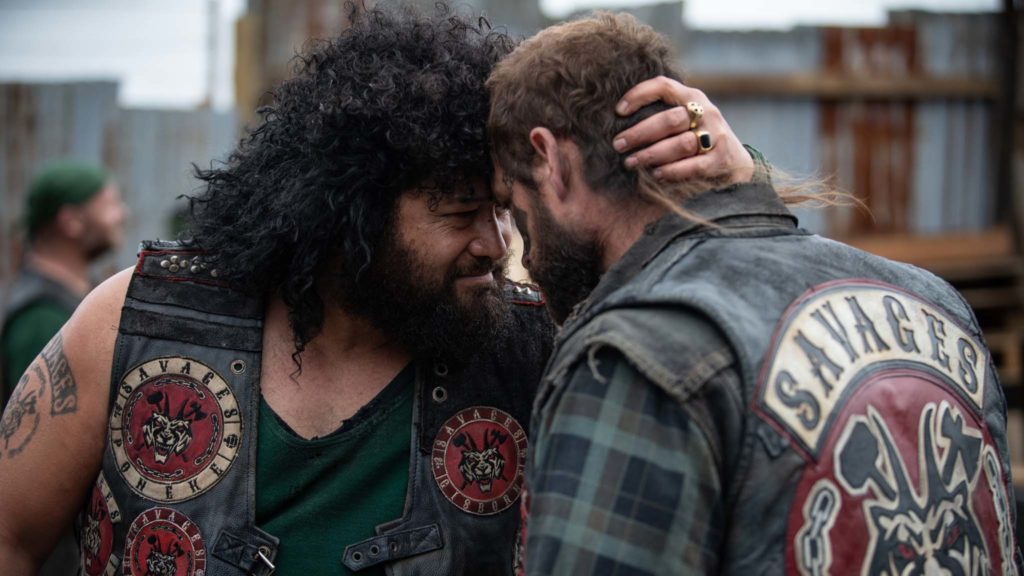 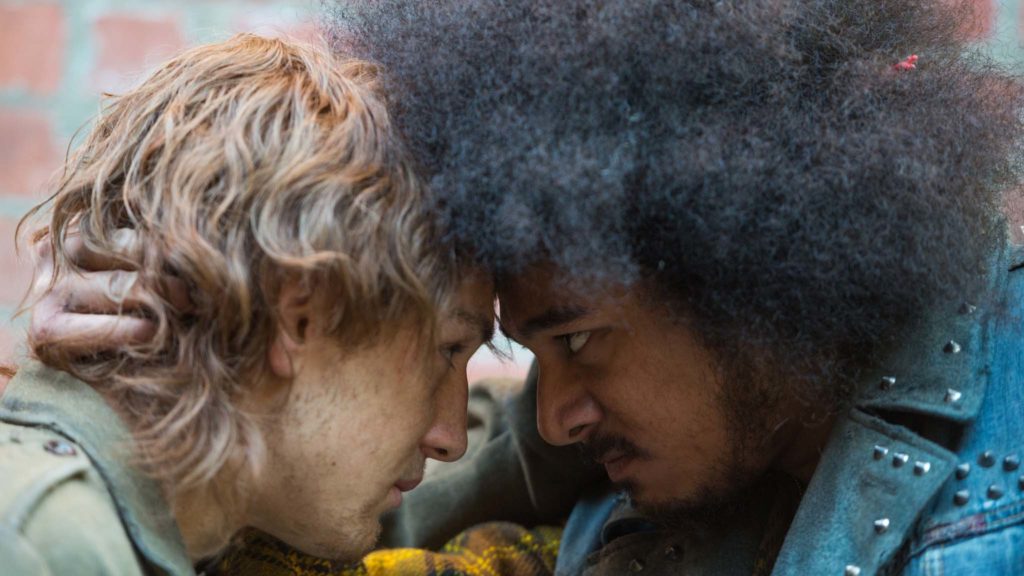 Review: The families we make are sometimes healthier and more supportive than the ones we are born into. Writer-director Sam Kelly delivers that harsh lesson with teeth bared in the unflinchingly brutal drama Savage. Divided into three bleak and blood-spattered chapters – childhood (1965), adolescence (1972) and adulthood (1989) – Kelly’s film exposes the fraternal bonds and toxic masculinity of New Zealand gang culture with repeated gut punches.

His script shares a few obvious chromosomes of creativity with Lee Tamahori’s award-winning 1994 drama Once Were Warriors and the long-running American TV series Sons Of Anarchy. However, Savage is informed by true stories of gang culture on the North Island, where the dispossessed and alienated – some products of the care system – find camaraderie and a sense of belonging in the cultural and economic divide between neighbouring white and Maori communities. Jake Ryan and John Tui are well matched as battle-scarred brothers in gang warfare, whose reign may be coming to an end after almost 25 years of stone-faced solidarity.

Blood flows freely from the opening image of Danny (Ryan), the heavily tattooed sergeant of street gang president Moses (Tui), taking a hammer to the hand of gang member Dice (Dominic Ona-Ariki) for failing to pay his dues. The bone-crunching rebuke is also a warning shot across the bow of Moses’ sworn rival Tug (Alex Raivaru), who is sowing seeds of discontent to stage a coup. As tensions escalate, banker’s daughter Flo (Chelsie Preston Crayford) challenges Danny’s snarling hard man act behind closed doors. His inability to meet her demand for tenderness sparks a patchwork of pain-soaked flashbacks.

As a young boy in 1965, Danny (Olly Presling) fails to protect his mother (Renee Lyons) and siblings from a bullying, devoutly religious father (Matthew Sunderland). Danny is sent to borstal where he endures repeated physical and sexual abuse at the hands of staff. “We’ll look after each other, me and you,” pledges roommate Moses (Lotima Pome’e). Seven years later, Danny (James Matamua) and Moses (Haanz Fa’avae-Jackson) angrily form their gang, the Savages, putting them on a collision course with a rival posse that has attracted Danny’s brother Liam (Jack William Parker). Sifting through these memories, Danny reconsiders his position as enforcer. “If you quit, you’re gonna take me down with you,” snarls Moses.

Savage unapologetically lives up to its title from the opening scene and loudly demands our attention as Danny and Moses’ shared history comes into queasy focus. Ryan, Tui and a gifted young cast simmer with rage. Kelly doesn’t pull his punches either with graphic displays of on-screen intimidation, which fully warrant the 18 certificate. The threat of violence hangs in the air like a foul stench, demanding we hold our breath until the narrative reaches its howling crescendo.

Find Savage in the cinemas