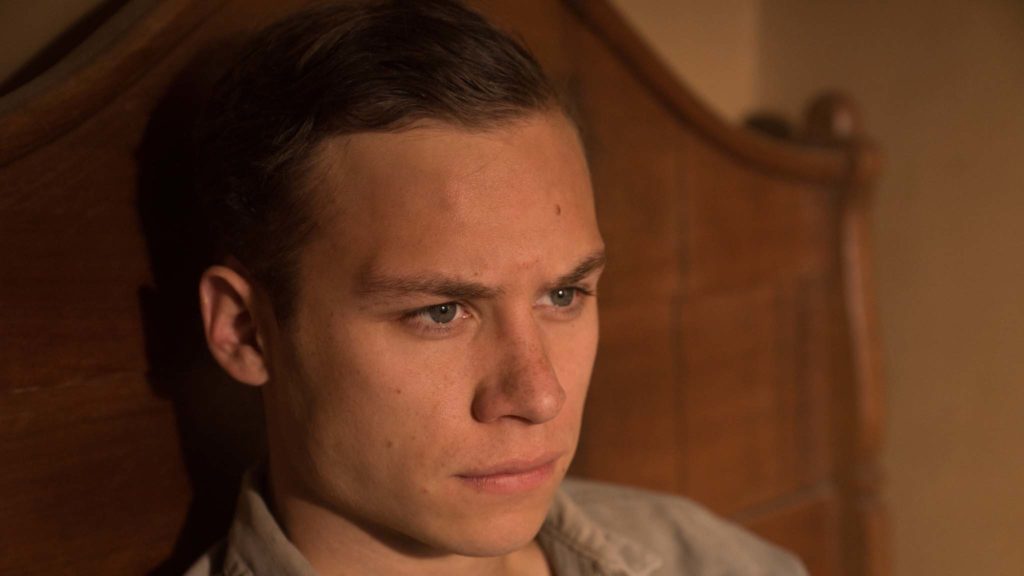 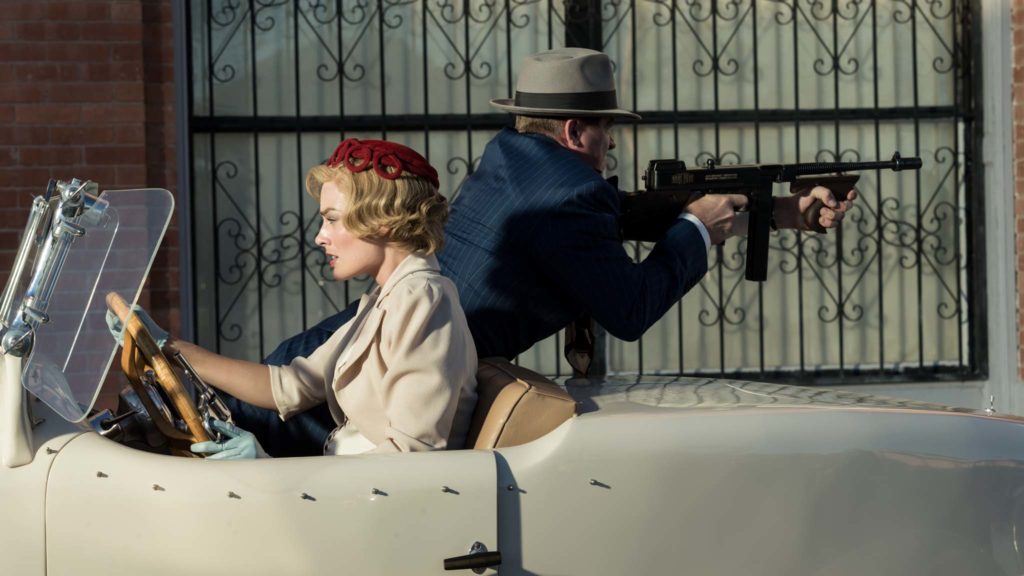 Review: Doomed lovers go on the run in Dreamland, an overly familiar tale of lust in the dust that owes some of its stylistic choices and hopeful romanticism to Terrence Malick’s Oscar-winning 1978 drama Days Of Heaven. The sun beats down relentlessly on director Miles Joris-Peyrafitte’s second picture, reducing the American dreams of Depression-era settlers to withered husks as drought and a series of devastating storms parch the farmlands of Texas. Seeds of hope seldom take root and any brave souls that remain place their faith in the words of the Lord and generous glugs of a liquor bottle.

Screenwriter Nicolaas Zwart uses the faded pastoral idyll as a weather-beaten backdrop to a meeting between a teenage boy, who has been starved of paternal affection, and a fugitive female bank robber with a rap sheet akin to Bonnie and Clyde. Embers of desire ignite in the picture’s languid second half, which is dominated by a prolonged shower sex scene that operates effectively as a demonstration video on water wastage. Two-time Oscar nominee Margot Robbie discharges her undeniable star power, almost convincing us that she has feelings for Finn Cole’s infatuated youth when neither the script nor Joris-Peyrafitte’s direction convincingly back up her teary-eyed outpourings.

A female narrator (Lola Kirke) recounts the story of Eugene Baker (Cole), who grows up in the sun-scorched dustbowl of Texas, with his father John (Hans Christopher) and mother Olivia (Kerry Condon). The old man leaves when Eugene is five, sending just one postcard from New Mexico after his angry, night-time exodus. Eugene grows into an awkward teenager, who escapes the unforgiving weather conditions by immersing himself in the detective magazines he steals from a local store with best friend Joe (Stephen Dinh).

During one of these sorties into town, the boys learn that bank robber and murderer Allison Wells (Robbie) is at large in the state. There is a 10,000 dollar reward for her capture. Soon after, Eugene stumbles upon the injured fugitive in the family’s barn and responds to her pleas for help by nervously removing a bullet from her thigh. Allison paints herself as a victim of bad circumstances and offers the boy 20,000 dollars to steal a vehicle to get her to Mexico. By aiding a bank robber, Eugene risks dire repercussions for his mother, lawman stepfather George (Travis Fimmel) and little sister Phoebe (Darby Camp). “This is the land of burden, kid. Now you get to pick yours,” coolly summarises Allison.

Dreamland lights up every time Robbie limps on screen, contradicting the narrator’s assertion that Eugene is the emotional lynchpin of her oral history. The 98-minute running time feels markedly longer but when the narrative does shift into second gear, an inevitable resolution is hurried.

Find Dreamland in the cinemas 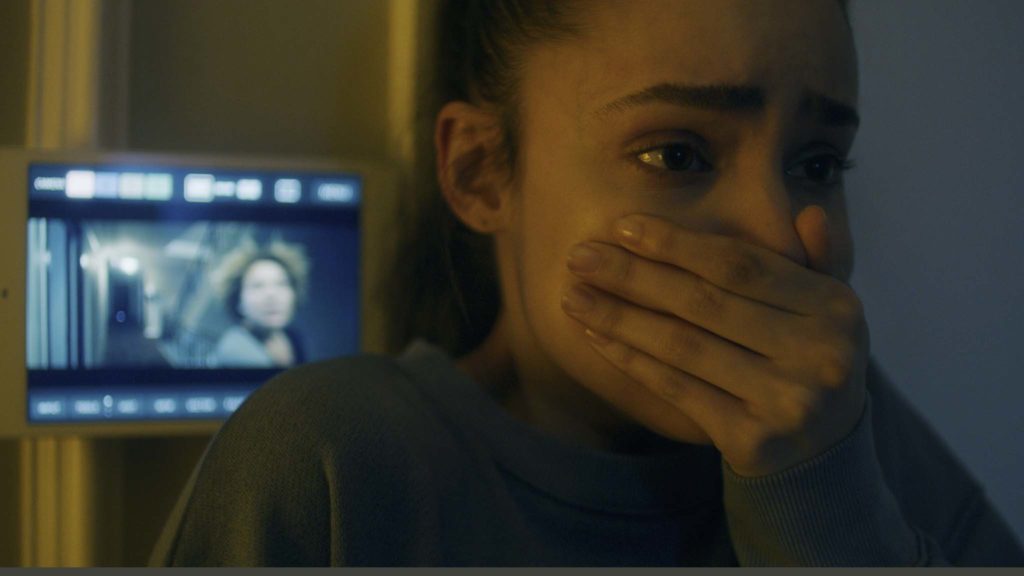 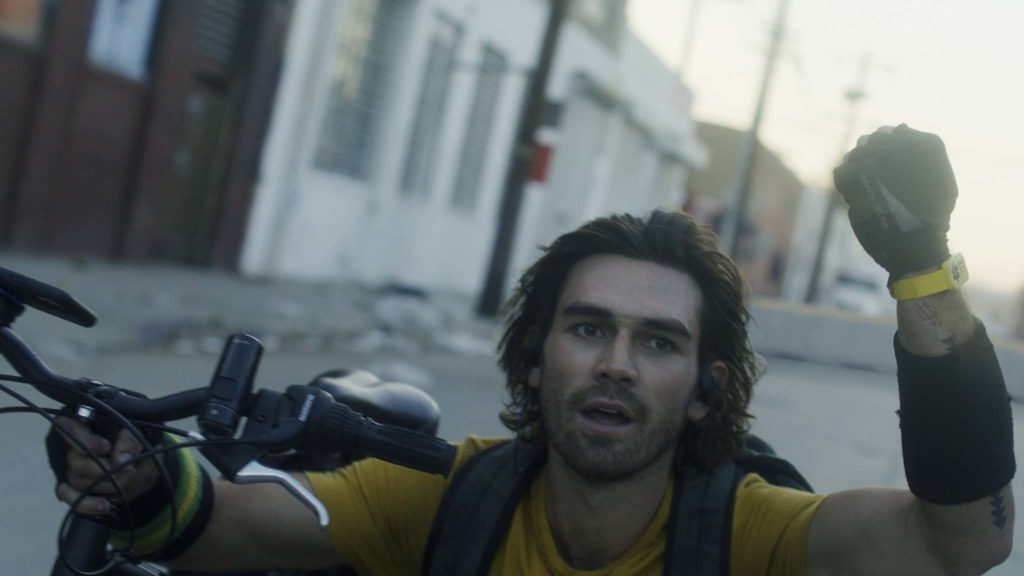 Review: In the years since coronavirus swept the globe, the virus has repeatedly mutated. The fourth airborne strain, Covid-23, is the deadliest yet, accounting for more than 110 million deaths worldwide. Citizens are ordered to stay indoors to avoid infection. A morning temperature check on mobile devices identifies anyone who should be dragged from their home by Hazmat-suited agents and deposited in quarantine camps known as Q-Zones.

Former paralegal Nico (KJ Apa) has immunity and is allowed outside during daylight hours to work as a bicycle courier. He pedals furiously around deserted Californian streets, delivering parcels to customers including wealthy couple, the Griffins (Bradley Whitford, Demi Moore). Nico dreams of earning enough money to run away with his girlfriend Sara (Sofia Carson), who he has never been able to touch for fear of transferring the deadly contagion. When a daily temperature check puts Sara in jeopardy, Nico races against the clock to engineer an escape route through the city’s heavily armed barricades.

Reviews of Songbird are embargoed until Friday. Please check later in the week for our full review.

Find Songbird in the cinemas

Space Dogs: Return To Earth (U) 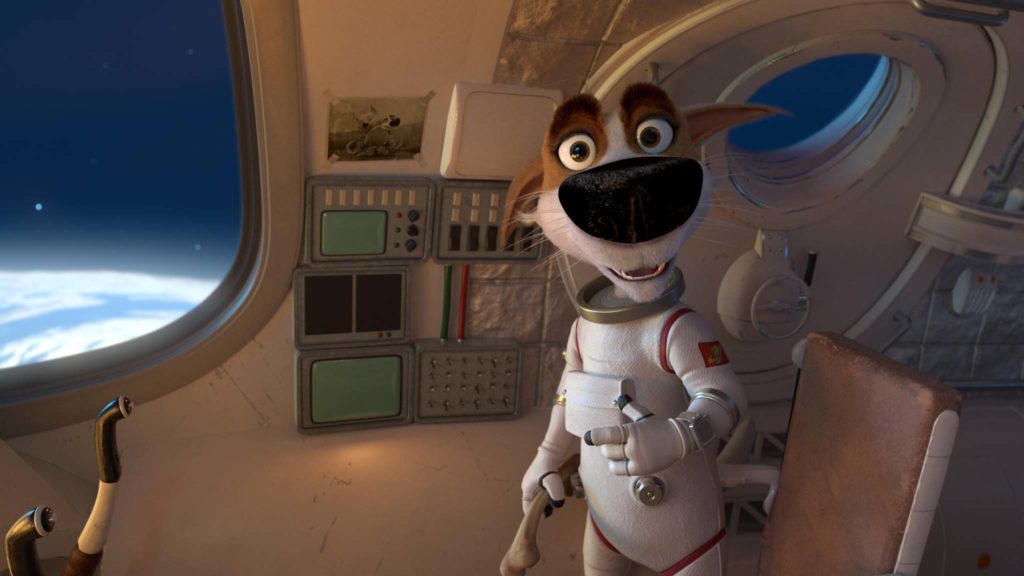 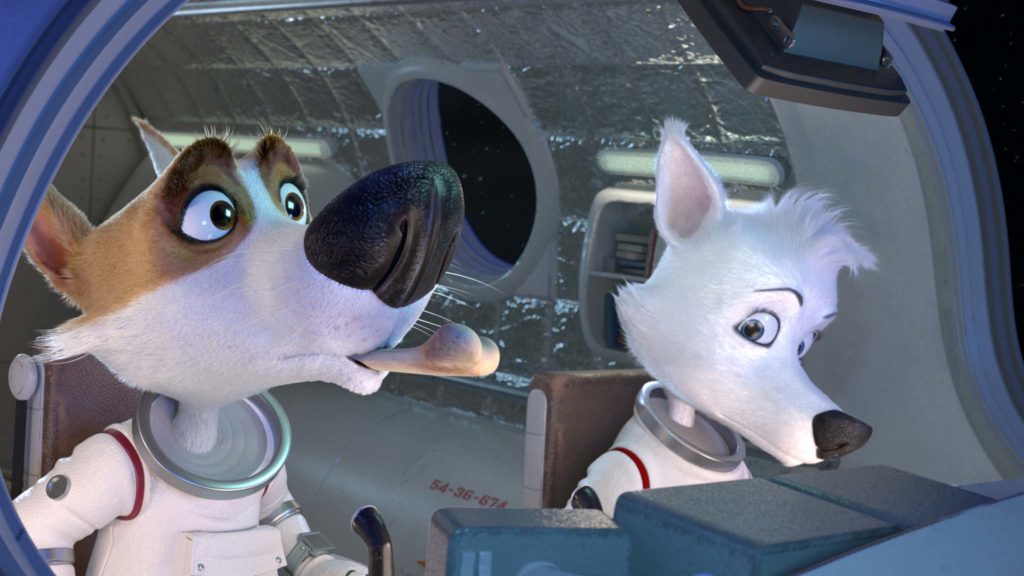 Review: Director Inna Evlannikova teaches old dogs newish tricks in the third computer-animated chapter of the Space Dogs saga, which originally took flight in 2010. Bolted together in Russia then dubbed into English, Space Dogs: Return To Earth blasts off for an out of this world adventure that seldom escapes the gravitational pull of a pedestrian plot and solid, unremarkable visuals. What the animation might lack in sophistication and realistic detail, especially when the action takes to water, it makes up for in bright, summery colours that cast a warming glow as temperatures plummet outside.

A script credited to five screenwriters trades in gentle, inoffensive humour that should appeal to very young audiences. When a naive rat spots an approaching ship flying a skull and crossbones flag, he innocently remarks, “I think they’re archaeologists”, and googly-eyed, treasure-seeking jellyfish tunefully introduce themselves as “pirates who can sing and make you itch”. Any snorts from adults are most likely whinnying snores. Manifold subplots involving the misadventures of an enterprising rat lack an emotional pay off and ultimately feel like padding to bloat the running time to 80 minutes.

Valiant dogstronaughts Belka (voiced by Maria Antonieta Monge) and Strelka (Mauriett Chayeb) are ordered to terminate their current sample-gathering mission on an ice moon of Saturn and return to Earth. “Deliver the samples to me unscathed. Your tails are on the line,” demands their commanding officer. The plucky duo are requested to investigate an anomaly in the Atlantic Ocean off the coast of Cuba, which poses a threat to furry and feathered residents of the tropics. According to scientific data, the giant whirlpool will swallow the water of the Atlantic in less than three days.

Belka and Strelka pilot their spacecraft close to the column of swirling aqua and are struck by lightning. The plucky pooches plummet into the ocean where they discover the source of the disturbance: a submerged alien spacecraft manned by an elephantine creature named by Pumbary (Oscar Cheda) and armed guard Croakagy (Jason Michael Kesser). Meanwhile, Belka and Strelka’s old friend Lenny the rat (Alexander Machado) and his cricket sidekick Thomas (Romulo A Bernal) arrive in Cuba just as disaster strikes. They seek out the rodent’s seafaring uncle, Jonas (Christopher Leigh Jahn), to escape the eye of the gathering storm.

Space Dogs: Return To Earth idles into first gear with an opening set-piece involving intergalactic ice monsters and maintains the same pace as events unfold above and below the waves. Some of the vocal performances merge in pitch and tone though thankfully, Evlannikova’s picture is light on meaningful dialogue so there’s never any danger of a key plot point being waylaid.

Find Space Dogs: Return To Earth in the cinemas 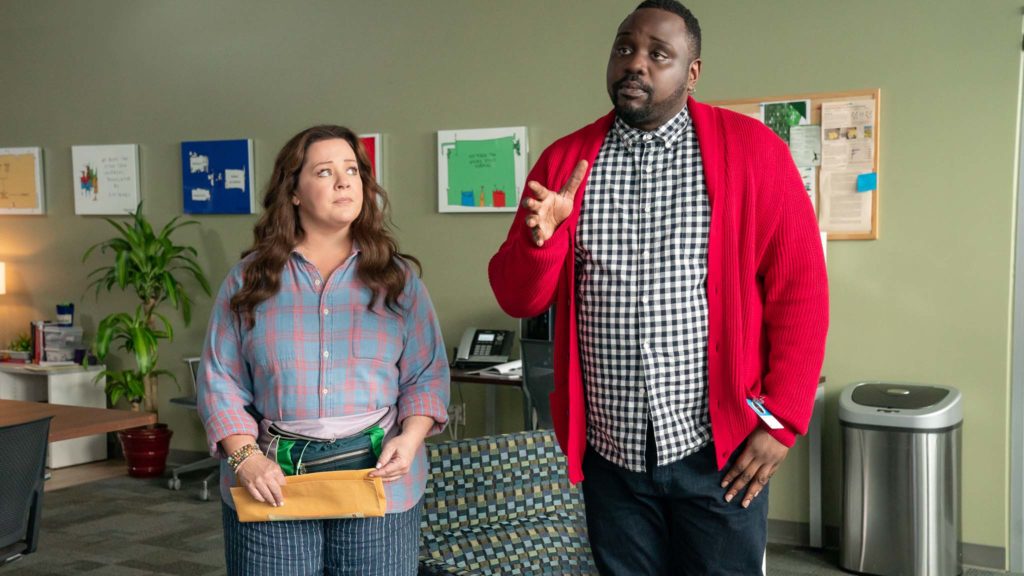 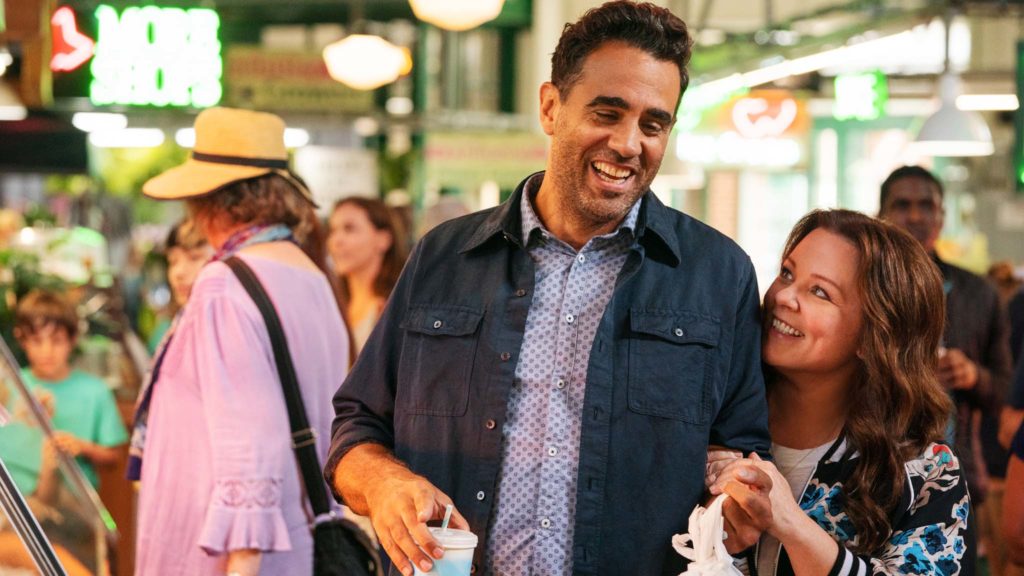 Review: You don’t require superintelligence to spot a worrying trend in Melissa McCarthy’s career since her 2011 breakthrough in Bridesmaids, which snagged her a richly deserved Oscar nomination. Her least successful roles in Tammy, The Boss and Life Of The Party are all directed by her husband Ben Falcone and co-written by the happy couple. Vanity projects are her least attractive work, supplanting laughter with yawns. Falcone is back behind the camera for Superintelligence, a high-concept yarn penned by Steve Mallory, which rests the fate of the world in the hands of McCarthy’s bland, nondescript everywoman. It’s the funniest of the conjugal collaborations and boasts touching moments when the leading lady demonstrates her teary-eyed dramatic range with aplomb. However, the bar has been set incredibly low and even the most gifted limbo dancer would strain to shimmy under it.

Mallory peppers his script with pop culture references to 1980s and 1990s films and TV series including Knight Rider, Law & Order and WarGames. Each punchline lands with a smile but he evidently doesn’t trust us to giggle in the right places because characters insist on explaining gags ad nauseum. The only time we aren’t treated like simpletons – a vocal cameo by Octavia Spencer – elicits the warmest reaction.

Computer coding, which originated in the operating system of a fluffy pink Candy Panda electronic toy, acquires awareness and silently takes control of every electronic device around the planet. The superintelligence hijacks CCTV cameras to search for a “baseline guinea pig” to determine whether humanity should be saved, enslaved or destroyed. This covert surveillance includes a job interview in Seattle where former Yahoo executive Carol Peters (McCarthy), who walked away from her high-paid job to pursue philanthropic endeavours, is rudely dismissed as “the most average person on Earth”.

The following morning, the superintelligence contacts Carol through her appliances, using the voice of her favourite celebrity: James Corden. The omnipotent algorithm persuades Carol to demonstrate a human being’s full spectrum of emotions by making amends with her old flame, George (Bobby Cannavale), a professor of creative writing who is poised to leave Seattle for a coveted one-year tenure at Trinity College Dublin. Meanwhile, Carol’s best friend Dennis (Brian Tyree Henry), who works at Microsoft, alerts the US President (Jean Smart) and her advisers to the global threat.

Superintelligence relies heavily on McCarthy’s gifts as a physical comedian and for once, Falcone’s direction doesn’t snuff out her brilliance. Gently simmering on-screen chemistry with Cannavale depends more on natural rapport between co-stars than anything explicit in the script. Corden is granted excessive screen time as the wish-granting AI – “I’m not a genie in a Disney movie!” – at the expense of a talented supporting cast, who count their blessings if their characters have one discernible trait by the end credits.

Find Superintelligence in the cinemas