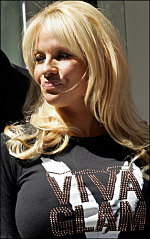 Pamela Anderson has denied she is dating Michael Jackson.

The former Baywatch star – who has three failed marriages behind her – insisted the only reason she met up with the eccentric singer was because he wants her to appear in a music video.

Pammie, who was romantically linked to the Thriller star earlier this month, told US TV talk show host Ellen DeGeneres: “Michael just wants me to be in a video. My life is so interesting. My life is a blur.”

When Ellen continued to question the 41-year-old beauty about her relationship with the troubled musician, Pammie admitted she had been “hanging out” with him, adding cryptically: “It happens. skin cancer and Vicodin. I don’t know – I have a lot of interesting friends.”

It was recently reported Pamela – who has two sons with ex-husband Tommy Lee – was dating a member of the Abu Dhabi royal family.

The actress – who first met the royal when she visited Abu Dhabi in June with the Make a Wish Foundation – was said to have only revealed her new beau’s name to a few select friends, but refers to him in conversation by the pet name she made up for him – Milk-Sheik or Milk for short.