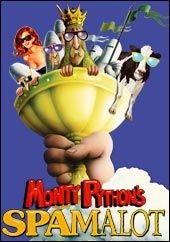 See Alan Dale as King Arthur in Monty Python’s SPAMALOT from 3 March. From Jim Robinson in Neighbours to media mogul Bradford Meade in the smash hit Ugly Betty and from tycoon Caleb Nichol in cult series the O.C. to Vice President Jim Prescott in the award winning phenomenon 24, Alan Dale is without doubt one of the most familiar faces on TV today.

SPAMALOT retells the legend of King Arthur and his Knights of the Round Table with the help of a number of gratuitously scantily clad showgirls, cows, killer rabbits, French people and a legless knight.

This competition is now closed. The winners are as follow:
Bernadette Headd-Williams
Erin Harmeyer