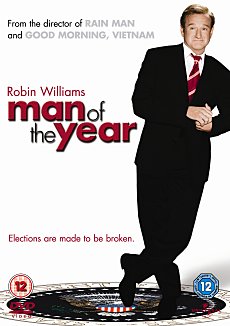 In Man of the Year, popular talk show host Tom Dobbs (Robin Williams) speaks the mind of an exasperated nation, aiming nightly zingers at politicians and their cronies. When Dobbs makes a joke about running for president, a grassroots movement sweeps him onto the ballot. Soon Dobbs is skewering his opponents and winning huge laughs – but even he never dreamed that he would win the election! Hilarity ensues as Dobbs learns a computing error gave him victory, and as the inaugural clock ticks, he must decide whether he should return to his late night time slot or stay in the Oval Office.

Buy Man of the Year at Amazon >>