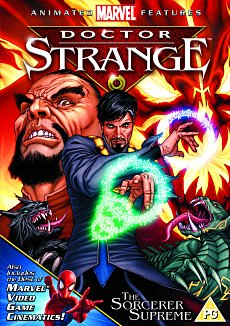 Doctor Strange, the fourth instalment in the successful Marvel Animated Features Series, is available to own or rent on DVD on February 4th 2008. This is a truly mystical and magical tale, full of sorcery and intrigue, plus incredible battle sequences between superheroes and supernatural villains!

A supernatural war is raging and darkness appears to be winning the battle…yet there is a glimmer of hope in the form of the Sorcerer Supreme, Doctor Stephen Vincent Strange.

Doctor Stephen Strange was one of the most gifted surgeons in medicine before his hands were left shattered and useless as a result of a car crash. Seeking healing at the feet of the mysterious Ancient One, he embarks on a wondrous journey to the heights of a Tibetan mountain. But before his wounds can heal, Strange must first let go of his painful past and awaken a gift granted to very few, the gift of magic. Empowered as the new Sorcerer Supreme, Doctor Strange now tests his limits, rising up against monsters that push at the gates, facing the most terrifying entity humankind has ever known.