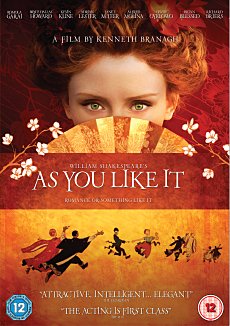 With a setting inspired by 19th Century Japan, Kenneth Branagh adapts Shakespeare’s lightest and most delightful comedy As You Like It, a celebration of the enduring power of love in all its many guises. Witty, playful and utterly magical, the story is a compelling romantic adventure in which Rosalind and Orlando’s famous courtship is played out against a backdrop of political rivalry, banishment and exile in the Forest of Arden. As You Like It, is available to own on DVD from 25th February 2008.

Rosalind (Golden Globe®-nominee Bryce Dallas Howard), is the victim of circumstance as the unfortunate daughter of a banished Duke (Brian Blessed). With her family’s reputation in tatters she is forced to flee her uncle’s royal court and seeks a hidden refuge in the wild Forest of Arden. Accompanied by her loyal cousin Celia (Romola Garai), Rosalind bravely embraces this new, foreign world and disguises herself as a man to avoid detection.

Rosalind turns this situation seemingly to her advantage when she sees the opportunity to befriend her noble admirer Orlando (David Oyelowo). Under this new false identity, she allows herself to open a window to his heart in an attempt to discover his true feelings for her. Gleefully she leads him on a merry dance in lessons of the heart as his new ‘friend’, and is sure that all will be well for them when she reveals herself as his true love.

Buy As You Like It on DVD at Amazon >>

Wereholf: The Beast Among Us Competition